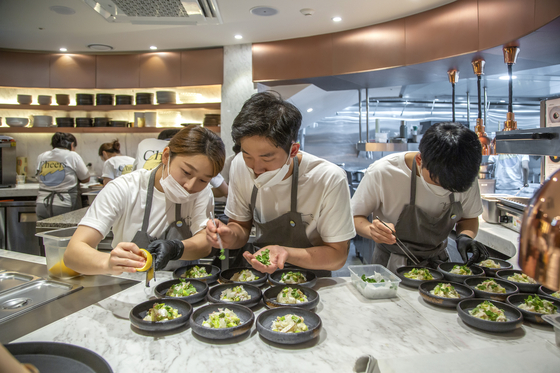 
Creative talents in Korea came together to organize a fundraising dinner in an attempt to raise awareness for those working on the frontlines of preventing the coronavirus pandemic from spreading further.

Many of the talents, who had experiences either working or living overseas, tried to use both international and local influences in the dinner to allow those in attendance to reminisce on times before the coronavirus, when travel was easily accessible, and remember those actively fighting Covid-19.

Accordingly, the event was titled "Cheers," in a nod to the respect and admiration such workers deserve. Diners were invited to make donations of any amount, which would go to the Red Cross.

There was also an auction to raise funds. Items up for grabs included a movable induction grill for home chefs, bottles of wine and wine glasses for wine connoisseurs, as well as other items like a tea set. 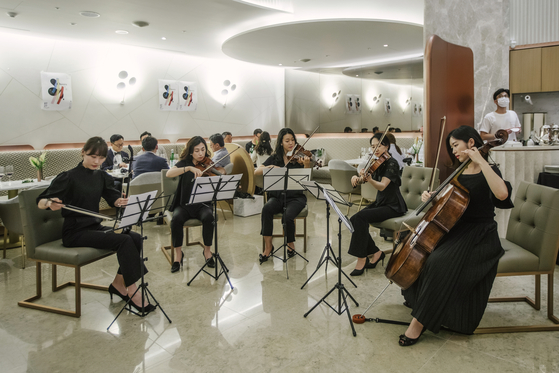 
Jung Jae-ho, chef at restaurant Otrec in the hip Euljiro area in central Seoul, took the lead in inviting many talents from different industries to come together for the event.

Over 20 talents contributed their time and efforts, from making flower arrangements to decorating the dining tables and promoting the event to the public to attract more attention. Editor-in-chief of magazine Bar and Dining Park Hong-in also joined to direct the overall flow of the event.

Jung first came up with the idea for the event after the restaurant he worked for in Austria had to shut its doors in April and began cooking thousands of servings of lunch and dinner to help medical staff, the police and soldiers. Other restaurants in the area sent over ingredients to Steirereck, where Jung used to work, to help provide as much diversity as possible. The communal effort inspired him. 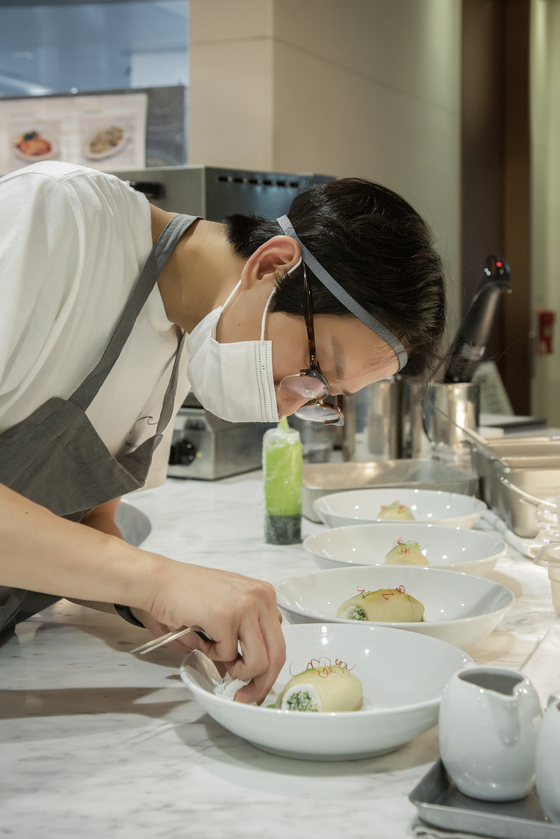 
He came back to Korea due to some visa issues that made it difficult for him to stay in Austria, just as many other culinary talents who used to work in Europe or elsewhere in the world came back home when the restaurants and bars they were employed at were forced to keep their doors closed. That was when he decided it was time to fuel his inspiration into action.

During the about three-hour dinner, diners were served six courses. Some of the dishes were paired with wine. To reflect their previous experiences overseas, chefs mixed Korean ingredients with international aspects to present modern takes on classic Korean dishes.

Slices of burdock root, which are often served as part of banchan, or assorted sides dishes, were served with beef tartar, as well as bean broth, with noodles and tomatoes.

A pudding-like panna cotta using makgeolli, a traditional Korean fermented rice drink, ended the dinner on a sweet with a touch of savory note.

Beer and wines were paired to enhance the flavors and the overall dining experience. The recently popular natural wine, or wine made with minimal human intervention from vineyards that don't use pesticides or other man-made chemicals, was served including one from Austrian winemaker Gut Oggau as well as another from French winemaker Bertrand.

Before and after the first and last dish were served, Cantare String Quartet presented classical music performances. 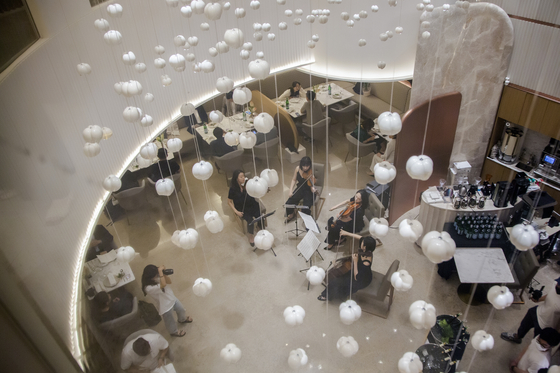 
To continue making such events to help those in need, the participants formed the Young Creative Collective. Everyone who participated in making the first event this week are considered founding members and anyone who joins in the future will also be included.

Jung thought having a group will help everyone stay connected. It is something he learned after running two different pop-up events overseas. His very first one was in Austria in 2018 to promote Korean food to Michelin-starred chefs in the country with fellow Korean chefs working in Europe as he saw many chefs in Austria had very fragmented experiences with Korean food. The second one was last year in Belgium for non-chefs to introduce foods that Koreans eat at home or at restaurants on a daily basis.

“Everyone has their own work at different restaurants and companies, but I wanted them to have a place to communicate with others so that we all can find some things to look back on and see what we can do better,” said Jung.

“We don’t know what more we can make in the future, but given that each and every person has different talents, we should be able to make something different with diverse content in the future.”