Lotte Giants told to space out fans or close stands

Lotte Giants told to space out fans or close stands 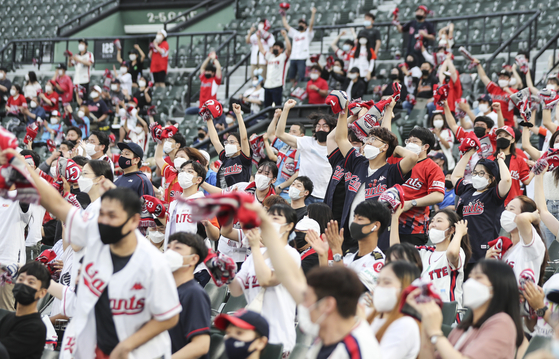 Lotte Giants fans watch a home game against the NC Dinos on Tuesday afternoon at Sajik Baseball Stadium in Busan, the first time spectators were allowed into the stadium this season since the coronavirus outbreak. The Busan city government has warned the Lotte Giants to enforce stricter social distancing guidelines on their fans, or else go back to virtual cheering. [YONHAP]

Fans of the Lotte Giants could go back to virtual cheering if they don’t space out in the team’s Busan home stadium.

The Busan Metropolitan Government relayed the ultimatum to the Lotte Giants Wednesday, saying that if the team fails to enforce the government’s social distancing guidelines at their Sajik Baseball Stadium, all games held there this season could return to the no-spectators rule.

Concerns about mass coronavirus infections flared at the stadium Tuesday afternoon, when the Lotte Giants played their first game with spectators since the pandemic erupted. About 1,000 fans were allowed to watch from the stands, months after the KBO season kicked off on May 5.

It was supposed to be a major breakthrough in Korea’s handling of the outbreak, as local health authorities announced last week that fans would be allowed to watch ballgames in person, albeit under strict guidelines. Stadiums were told to cap attendance at 10 percent of total capacity, and spectators were warned to wear face masks at all times, keep social distance from one another and refrain from eating snacks or rooting vociferously.

In-person attendance at baseball games began last Sunday, and football games are planning to do so this Saturday.

The Lotte Giants, however, landed in hot water after the Tuesday game, in which fans were caught on camera seeming to flout social distancing rules near first base.

The team had sold tickets in only the most popular zones to fall within the government’s 10-percent cap, and most spectators bought spots closest to first base, with every other seat vacant, except for those who arrived together. Rows weren’t separated.

An official from the Busan Metropolitan Government who went to the game Tuesday for field guidance said that, technically speaking, the fans did abide by the government’s social distancing guideline of sitting 1 meter (3.3 feet) away from each other, but that it “didn’t seem to be enough” to prevent possible virus transmissions. The city government office is asking the Lotte Giants to space out their fans even more.

Other baseball teams had spaced out their fans farther.

In response to Busan’s warning, the Lotte Giants said the fans would subsequently be separated by three seats in all four directions, and tickets would be sold for all zones. 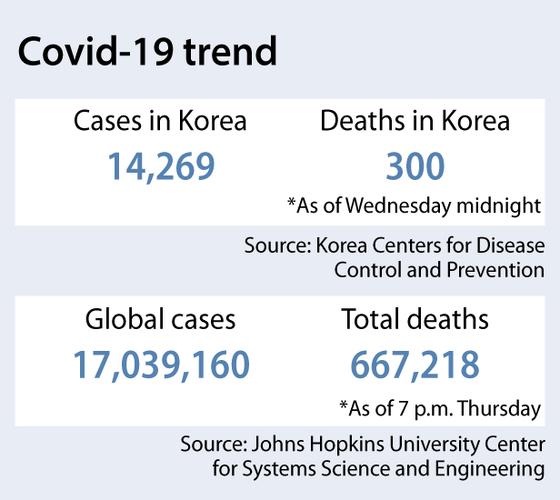 Health officials offered some good news, however, with new virus infections falling to a one-month low on Wednesday. Just 18 people were newly diagnosed with the coronavirus, according to data released by the Korea Centers for Disease Control and Prevention (KCDC) Thursday morning, down from 48 on Tuesday.

Of Wednesday’s case load, 11 were imported cases: four from the Philippines, three from Saudi Arabia, two from the United States and one each from Iraq and Uzbekistan.

Among seven people who were locally infected, four live in Gyeonggi and three in Seoul.

No one died Wednesday, leaving the death toll from the outbreak at 300. As of Wednesday at midnight, 13,132 people had recovered, up 63 from the previous day.

Gyeonggi police said Thursday that three Vietnamese men who escaped from a government-run quarantine facility in Gimpo, Gyeonggi, on Monday morning were captured Wednesday afternoon in nearby Incheon and Gwangju, Gyeonggi.

Police said the men testified to escaping from their 14-day mandatory quarantine because the facility was “stuffy” and they wanted to make money in Korea as quickly as possible. All three fugitives will likely be deported after questioning, officers said.

Health officials said the three foreigners arrived in Korea earlier this month on B-2 tourist/transit visas. They all tested negative on their first test after entering the isolation facility on July 20.

Almost everyone coming from a foreign country, including Korean nationals, are required to self-isolate in their homes or one of Korea’s state-run quarantine facilities for two weeks, the incubation period of the virus, except for a handful of visa categories, such as diplomats and foreign government officials.