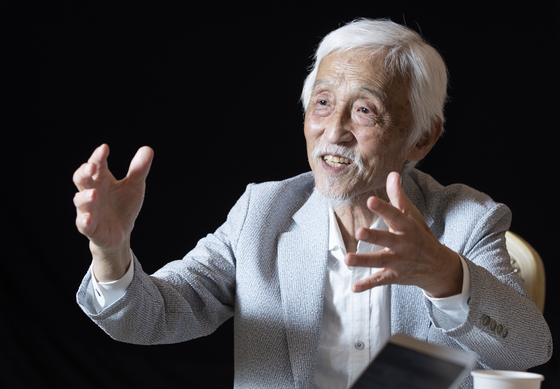 While it's common for people to lose their hearing as they age, its rare to see an actor wearing a hearing aid on stage. But 84-year-old veteran actor Oh Hyun-kyung is not ashamed to break that mold.

It's been about five to six years since Oh started used a hearing aid, but he's never let it impact his passion for acting.

"Speak loud and slowly, please," said Oh, when the JoongAng Ilbo met with him to discuss his upcoming theatrical play “Les Misérables” which is based on Victor Hugo’s original novel.

Oh’s role in “Les Misérables" is Monsieur Gillenormand, the grandfather of the male protagonist, Marius. This marks his fourth time joining the cast after taking on the same role in 2011, 2012 and 2013.

He only appears in two scenes, in both of which he talks to Marius.

"Three actors playing the Marius character all have different styles," Oh said. “I act differently based on who I am on stage with.”

While the role of Monsieur Gillenormand might seem like a minor one to a veteran actor with 65 years of experience, his presence is mighty.

Having published a master's thesis on speech and acting techniques in 2010, Oh is known to have acting skills straight out of a textbook — accurate pronunciation, strong vocalization and clear expression of emotions.

He says he shares acting advice with junior actors at every rehearsal, and even held an acting seminar after gathering all of the cast from "Les Misérables.”

“Diction is the basis of an actor,” Oh said. "In the ‘Belling the Cat’ fable, when a mouse asks who will bell the cat, the next line reads, ‘I will go.’ The actor needs to put emphasis on 'I,’ but if I ask any actor to read it, almost all of them place the emphasis on ‘go.’ It’s a pity because the wrong pronunciation and accent completely change the meaning of the sentence.

“When I turn on the TV these days, there are so many actors who aren’t acting properly.”

Oh is more familiar to the public as Lee Jang-soo in KBS’s situation comedy “TV's The Art of War,” that was aired for six years from 1987 to 1993, but “where my heart belongs since childhood is on the theater stage,” he said.

"When I was a kid, I would watch people perform plays on the street. It was so fun to watch them that I decided to become an actor. I never enjoyed studying — all I wanted was to act. Even now, I feel most fulfilled when I'm on stage."

He debuted through the National High School Drama Competition when he was a 12th grader at Seoul High School and took part in 11 school plays while he studied Korean literature at Yonsei University.

"Vocalization, pronunciation and punctuation are the basics when it comes to acting. Without such basic training, you shouldn't start acting just because you are attractive or have a loud voice,” Oh said.

"Many actors make mistakes in delivering lines and expressing emotions, which is why there are audiences who think theatrical plays are boring. If an actor delivers long lines in one breath, the audience can feel cleansed. When I'm on stage, I'm proud to think that there will be an audience member who will feel emotional because of my acting."

Oh said he doesn’t have any stage plans for after “Les Misérables,” but his ambition remains the same.

“I called Lee Sung-yeol, the director of the National Theater Company of Korea to ask why he doesn’t cast me anymore. I can't play a big role, so I asked for a minor role, but he didn’t give me a proper answer, so I'm going to meet him and ask again.

The actor's voice was loud throughout the interview. He said a theater actor should have the same voice regardless of the size of the audience, big or small.

"Les Misérables" will run from Aug. 7 to 16 at the Seoul Arts Center's CJ Towol Theater in southern Seoul.