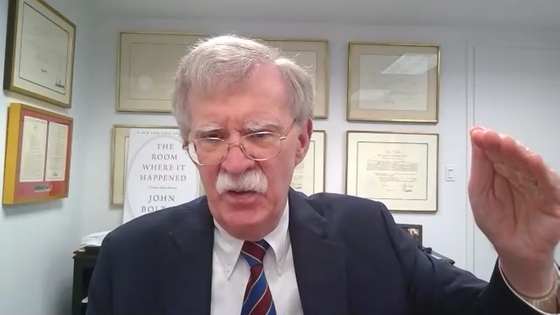 Bolton, in an interview with the JoongAng Ilbo published Monday, expressed “concern” that Trump may partially withdraw U.S. troops if he wins the American presidential elections in November “because of the disagreement with South Korea, and also with Japan, on the share of support and cost.”

He added, “The partial withdrawal from Germany is a piece of evidence that it’s serious,” referring to Trump’s announcement last week of plans to pull some 12,000 U.S. troops from Germany, or about a third of the total stationed in the country. Seoul has been concerned that the Trump administration may try to reduce U.S. troops in Korea, especially as the two sides struggle to seal a new defense cost-sharing deal on the stationing of some 28,500 U.S. troops on the peninsula.

When asked if the U.S. and Korean leaders have had a discussion on this matter, Bolton said in the interview conducted over a videoconference Thursday that Trump and Moon “have had several conversations” on this question “including in person just after the Osaka G-20 meeting" in Japan in late June 2019.

Bolton added that Trump has “never said directly, 'Increase your base support payments or we will withdraw,' but the clear implication is that withdrawal is a possibility.”

In July 2019, Bolton made a visit to Seoul and met with Korea’s foreign and defense ministers, and also spoke with his Korean counterpart, Chung Eui-yong, director of the Blue House National Security Office, where the defense cost-sharing issue was discussed. During that trip, Bolton also made a stop in Tokyo, where he similarly urged Japan to pay a much higher contribution to defense costs.

“I went to both Tokyo and Seoul before I left as national security adviser to explain it,” said Bolton. “What Trump was saying, in his mind, was very serious. I didn’t want people to misunderstand precisely because I worried, and I knew, that Trump’s threat or his idea of withdrawing forces was real.”

Seoul has maintained that there has been no discussion with Washington on the possibility of a reduction of U.S. troops in Korea.

Bolton, a former U.S. ambassador to the United Nations, served as Trump’s third national security adviser for 17 months from April 2018 to September 2019.

In his recent memoir, "The Room Where It Happened," Bolton recounts that Trump told Moon during a bilateral summit in Seoul in June 2019 that the United States “shouldn’t pay real estate taxes for land to protect the South since we didn’t own the land, and perhaps we would leave when things were peaceful.”

Moon, according to the book, said that Korea paid 2.4 percent of its GDP for its own defense, the highest level of all U.S. allies, and explained of Korea’s provision of free land, construction of various facilities, as well as weapons purchases, which amount to significant contributions to joint defense. Trump had insisted he wanted $5 billion, wrote Bolton, and eventually was “shrugging and sighing, tired of listening, obviously eager to move on.”

Bolton in the JoongAng Ilbo interview explained where the $5 billion figure initially demanded by the Trump administration, or nearly a fivefold increase in Korea’s contribution in burden-sharing, originated from.

“The formula that President Trump originally started out with was cost plus 50 percent,” said Bolton. “This is how builders in the United States price buildings, office buildings, apartment buildings. Their profit is 50 percent over the cost, which is $5 billion in the case of South Korea, according to the way the Pentagon calculates it. So in order to get $5 billion of actual cost they had to look at a lot of other things, including the cost incurred in the United States to deal with troops that are deployed overseas.”

He added this figure “covers all the cost of deployment, the cost of keeping the troops operational, the upkeep of the bases, transportation, communications, support cost.”

Bolton, a hard-liner in foreign policy, has been a skeptic of denuclearization negotiations with Pyongyang and said he was relieved that a declaration to end the 1950-53 Korean War, which ended with a ceasefire agreement, was not included in the joint statement signed by North Korean leader Kim Jong-un and Trump in their first summit on June 12, 2018, in Singapore.

But Bolton said he worries about Trump pulling an “October surprise” and holding a fourth meeting with Kim and agreeing to an end-of-war declaration ahead of the Nov. 3 U.S. presidential elections.

“In U.S. politics we have what we call the ‘October surprise,’ that a candidate who is behind in the election does something in October to try and change the outlook in his favor,” said Bolton. “And I’m worried that Trump may think of a fourth meeting with Kim Jong-un may be his October surprise at which point he would say we’ve declared an end of the war on the Korean Peninsula.”

He noted that there had been “a number of ideas about sanctions that could be suspended for certain actions by North Korea,” but said that this would be a mistake because it is the same approach that failed in the now defunct six-party talks in the Bush administration and the 1994 Agreed Framework in the Clinton administration.

“It has not worked in the past and it wouldn't have worked in the Trump administration,” said Bolton. “Not unless the regime fundamentally changes from its pursuit of nuclear weapons […] This may sound unrealistic. But I think Kim Jong-un still believes the Korean Peninsula can be reunited under North Korean rule and that the nuclear weapon capability is very important from his perspective.”

On predictions for the upcoming presidential elections, pitting the Republican incumbent Trump against Joe Biden, the presumptive Democratic presidential nominee, Bolton said, “If the election were held today, which is the way the pollsters often ask the questions, I don’t think there is much question that Biden will win.”

But he continued, “It’s just under 100 days until the election; that’s an eternity in American politics. Anybody who thinks the election is over at this point is really, I think, quite wrong.”