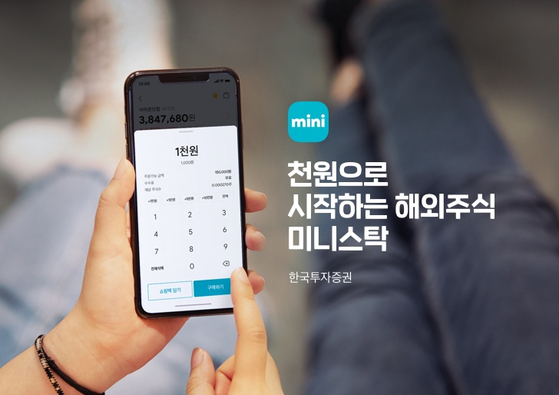 An advertisement for the Mini Stock app. [KOREA INVESTMENT & SECURITIES]

Korea Investment & Securities introduced its “Mini Stock” service Thursday, a mobile stock trading app for shares of international companies, the brokerage announced during an online conference on the day of the rollout.

With the app, the customer does not have to worry about currency exchanges or any of the other hassles of cross-border stock investment.

Orders are placed based on the amount of investment instead of the number of shares. Once the purchase is made, the buyer has fractional ownership of a share based on the purchase amount. A retail investor, for example, could buy 10,000 won worth of Amazon even though it trades at about 2 million won per share.

Investors can shop for shares of multiple companies at once. The app provides a shopping cart function, where purchases can be saved and orders placed together.

Currently, 260 companies traded on U.S. exchanges are available on the app, including Amazon, Google, Apple and Tesla.

These micro shareholders will have the same rights as any other shareholders, but they will not be able to attend the annual shareholder meetings as companies only give voting rights to owners of at least one full share.

Korea Investment & Securities will exempt fees for up to 10 transactions of less than 10,000 won through the end of the year. Any transaction after that will attract a 0.25 percent fee.

The brokerage firm said its app was acknowledged by the Financial Services Commission as an innovative financial service last year.

Stock investments are all the rage among young Korean investors, as many consider them as alternatives to savings accounts and real estate.

The number of active stock accounts opened this year through August 10 was up 11.29 percent on-year, and reached a new record of 32.7 million, according to data from the Korea Financial Investment Association.

Many people are thinking beyond the local stocks and venturing into foreign equities.

In July, more than $10 billion of direct investment was made into the international markets, according to data from the Korea Securities Depository. Stocks traded in the U.S. markets were the most popular, accounting for 82 percent of the total. Other popular destinations were China and Hong Kong.

Korea Investment & Securities plans to allow the trading of stocks in other countries apart from the United States.

The Mini Stock app is available on both Apple Store and Google Play.

In 2018, Shinhan Bank introduced a service that allows for the purchase of as little as 1 percent of a share of 86 foreign companies.

Musk exercises all his stock options