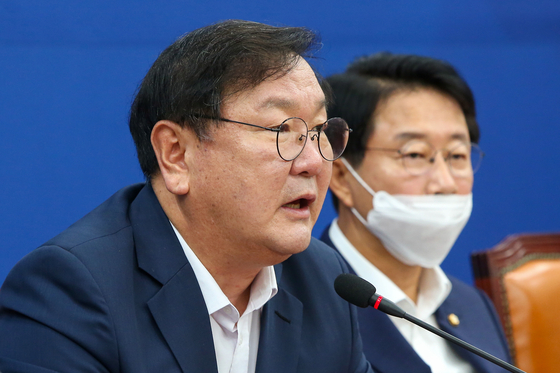 Rep. Kim Tae-nyeon, left, floor leader of the Democratic Party, speaks during a party meeting on Tuesday. Kim attacked the main opposition United Future Party for its participation in an anti-government rally on Saturday, where many protesters were believed to have been infected. [YONHAP]


The ruling party on Tuesday blamed the main opposition party for an ongoing surge in coronavirus infections, accusing its leaders of encouraging attendance at a massive anti-government rally despite the administration's requests to avoid mass gatherings in the capital.

“The United Future Party [UFP] must apologize to the people for having practically aided and abetted the Liberation Day rally,” said Rep. Kim Tae-nyeon, floor leader of the Democratic Party (DP) during a party meeting. “Freedom of religion and expression must be respected, but no one has right to threaten the people’s safety.”

Kim was coupling the UFP with the rally held on Saturday in central Seoul. Some UFP members including Rep. Hong Moon-pyo had attended the event, organized by conservative groups and the controversial pastor Jun Kwang-hoon — whose right-wing congregation, the Sarang Jeil Church, is at the center of a large outbreak of coronavirus infections spreading through Seoul. 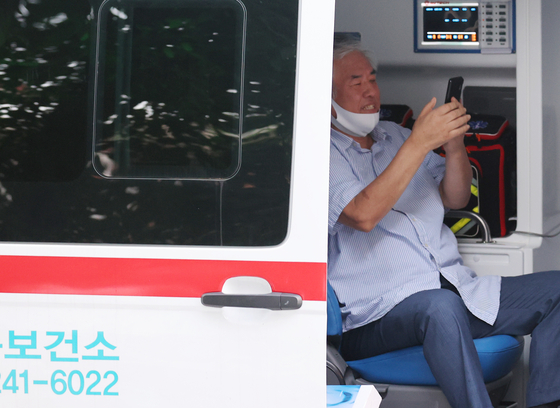 Pastor Jun Kwang-hoon of Saran Jeil Church is inside an ambulance of Seongbuk District Health Office on Monday. Despite his argument that he is free from infection, he tested positive for the coronavirus and was sent to an isolated ward. [YONHAP]


More than 400 members of the church, located in Seongbuk District of Seoul, and Pastor Jun have tested positive for coronavirus infections since last week. The pastor and his followers are fierce critics of President Moon Jae-in. In the latest protest on Saturday, Jun urged the people to oust the president. He also claimed that his church has become a cluster of infections due to a “terrorist” attack.

“The great tragedy of our society is that law and ethics are terrorized by this extreme church,” Kim said. “Anti-social, illegal activities can never be justified by religious freedom.”

He argued that the UFP should have taken aggressive precautionary measures, since its members had attended similar rallies held by Jun in the past.

“The party must order its former and incumbent lawmakers and party members who attended the rally to undergo voluntary self-quarantine and take tests,” Kim said.

“Pastor Jun and some UFP members are guilty of aiding and abetting the resurgence of infections,” said Rep. Park Sung-joon, spokesman of the DP. “They are destroyers of democracy.”

“The only solution to end the outbreak is following the directions of Jeong Eun-kyeong, head of the Centers for Disease Control and Prevention,” Kim Chong-in, acting head of the UFP, told the JoongAng Ilbo. “The ruling party must put all efforts toward respecting preventive measures. It is not a time to connect the rally with the UFP. They are trying to use the outbreak to divide the people, but the strategy won’t succeed.”

Kim said he has no intention of countering the DP’s attack.

“They are just repeating their old tactics,” Kim said. “It doesn’t deserve our response.”

Rep. Joo Ho-young, floor leader of the UFP, said in a radio interview in the morning that the party never condoned the rally due to its health risks.

“But the DP and the Blue House must pay attention to why the people went to protest, despite the high risk of infections,” he said.

The UFP also issued a statement to distance itself from Pastor Jun.

“Pastor Jun defied the government’s preventive measures and threatened the community’s safety,” Rep. Kim Eun-hye, spokeswoman of the UFP, said. “He deserves criticism and he must face stern punishment for his irresponsible actions.”

She also pushed back against the DP's attempts to link the UFP with Pastor Jun.

“It is pathetic for the DP to make this unreasonable link,” she said. “The UFP has no relationship whatsoever with him.”

The UFP’s predecessor, the Liberty Korea Party, had maintained a relationship with the controversial pastor. Hwang Kyo-ahn, then chairman of the opposition party, held a hunger strike near the Blue House in November 2019, and Jun visited him to give support. Hwang had also attended Jun’s rallies multiple times.

But the alliance was severed after the party rebranded as the UFP in February.

Rep. Kim argued that the government and the ruling party are actually responsible for the resurgence of infections, by easing preventive measures and boosting domestic consumption.

“The DP and the administration have taken the matter lightly and encouraged the people to travel and issue discount coupons before the special long weekend,” she said. "Instead of admitting to its mistakes, they are just blaming the people."