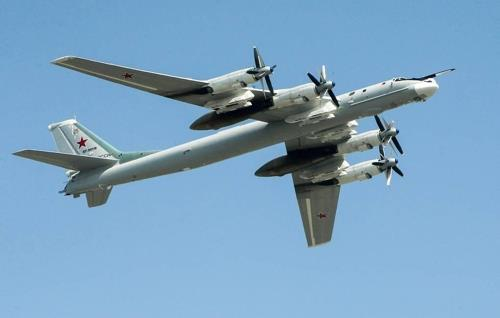 Russia flew two nuclear-capable Tu-95MS strategic bombers and four other military aircraft into the Kadiz, near Korea’s Dokdo islets in the East Sea around noon Wednesday without prior notice. The planes remained in the Kadiz for around 20 minutes before entering the Japanese air defense identification zone (Jadiz).


A military official said, “We tried to send the Russian military planes warning signals, but there was no response.”


The Russians did not invade Korea’s territorial airspace, so the Air Force did not take any further action beyond the warning signals and surveillance, added the official.

The Japanese Air Force also scrambled their fighters when the Russian planes entered the Jadiz.


An air defense identification zone, or ADIZ, is unilaterally set by a country and is not subject to international treaties or agreements. However, it is international courtesy for a military aircraft to make prior notification before flying into another country’s ADIZ.


The Russian Defense Ministry said in a statement that two Tu-95MS strategic bombers “conducted a prearranged flight over neutral waters” in the East Sea and northwestern Pacific Ocean and that the duration of the flight exceeded seven hours.


But Russia’s move seems to be a response to the United States flying six bombers near the Korean Peninsula Monday just before Seoul and Washington kicked off joint military exercises.


Some of the U.S. bombers also took part in a joint air drill with Japanese fighter jets in the East Sea.


“Our unique strength as an Air Force is our ability to generate integrated actions with our joint teammates and allies and partners to challenge competitors in a time and place of our choosing,” said U.S. Gen. Kenneth Wilsbach, commander of the Pacific Air Forces, in a statement Wednesday. “These simultaneous airpower missions demonstrated our capacity and readiness to deliver a wide range of proactive, scalable options to quickly deploy our forces to support our mission of ensuring a free and open Indo-Pacific theater.”


“Russia describing its entry of the Kadiz as a prearranged flight signifies that it plans to continue to conduct drills in this area,” a Seoul military official said. “The U.S. and Russian show of force [in the region] can become fiercer.”


Russia is last known to have flown its Tu-95MS bombers over East Asia on Nov. 27.


Russia violated the Kadiz over 20 times last year. A Russian Beriev A-50 aircraft violated Korea’s territorial airspace over the Dokdo islets twice on July 23, 2019, prompting the Korean Air Force to fire hundreds of warning shots in response. The two countries agreed last year to install a direct military hotline between their air forces to deter potential collisions or conflict in the Kadiz.