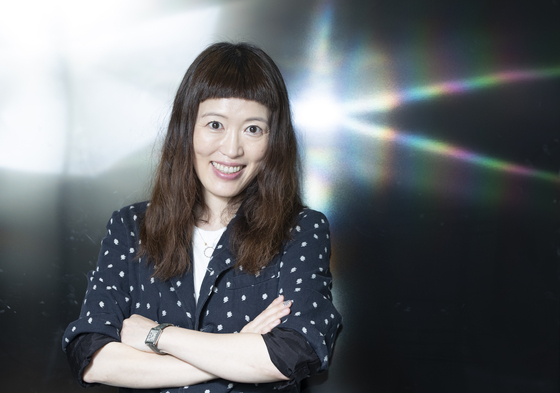 Cho Seo-yoon, head of the entertainment production for network Tcast, poses for a photo at the JoongAng Ilbo studio in central Seoul. [KWON HYUK-JAE]


“Sporty Sisters,” an original content program currently airing on entertainment network Tcast’s E Channel, is among the few variety shows that has managed to distinguish itself from the oh-so-many others populating broadcaster networks, cable and online.

The variety show gives female professional golf stars — Park Se-ri, Nam Hyun-hee, Kwak Min-jeong, Jung You-in and Han Yoo-mi — and their guests a chance to try out new things, such as camping, that they were unable to find time for in the past due to their strict training schedules.

According to Good Data Corporation, whenever new guests appeared, such as former volleyball players Han Yoo-mi and active players Lee Jae-young, Lee Da-yeong and former basketball player Kim Eun-hye, their names topped the list for most searched in the category of "non-drama television series." The show will also be available to stream on Netflix from Sept. 15.

Cho Seo-yoon, the head of the entertainment division of Tcast, said the success behind “Sporty Sisters” lies entirely with the cast in a recent interview with JoongAng Ilbo, an affiliate of the Korea JoongAng Daily, in Sangam-dong, western Seoul. Whereas male sport stars make regular appearances on variety shows — in fact, many even move from athlete to entertainer such as Kang Ho-dong, Ahn Jung-hwan, Kim Byung-hyun, Seo Jang-hoon and Hyun Joo-yeop — it’s rare to see a female sports star, let alone a group of them. 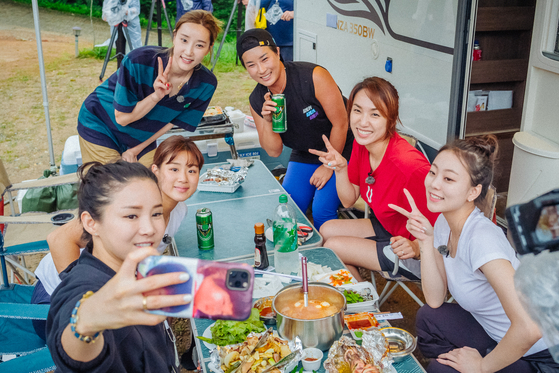 A scene from "Sporty Sisters." The show can be streamed on Netflix from Sept. 15. [E CHANNEL]


Another factor behind the success of “Sporty Sisters” lies with Tcast’s 2020 New Year’s resolution to develop its own original content, injecting more than 100 billion won ($84.5 million) into production. Tcast, a subsidiary of Taekwang Group, possesses more than 10 channels such as E Channel, Screen and Dramacube. Their aim to reach the goal began with recruiting Cho and Je Young-jae, both of whom then were working as producers at YG Entertainment, in January.

Since the recruitment, E Channel has launched various new shows such as “Topgoal Rhapsody” in May, “Love Again” and “Real Friend” in July, and last but not least, “Sporty Sisters” in August.

“As for ‘Topgoal Rhapsody,’ an audition show in which contestants gather from around the globe to sing Korean songs from the 1990s to the 2000s, it’s a real shame that it had to end earlier than expected due to Covid-19,” Cho remarked.

Her three years at YG Entertainment from 2017 played a key role in widening her horizon.

“You would think that if it’s an entertainment agency, [its content] is less organized than a broadcaster's, but it's not,” Cho said. “The standard of the girl group Blackpink’s reality show ‘Blackpink House’ [2018] and the audition program ‘YG Treasure Box’ in which boy band Treasure was born [2018-2019] are really high.”

Cho went on to become one of the most well-paid female producers in the industry, taking home a salary of 1.52 billion won for her last year in YG. She graduated from the Department of English Language and Literature in Yonsei University and was a New York correspondent at MBC. She’s also fluent in three languages other than Korean and English — Japanese, French and Chinese.

“Since I work at a profession where I should be sensitive to ongoing trends, I studied whenever I could to see and listen to the content myself,” Cho said.

Her next goal is to create another hit show as successful as “Sporty Sisters.”

“If job turnover was still on the grounds of unfamiliar territory for Generation X like me, for capable talents in Generation Y, [turnover] may be an option to consider, and for Generation Z it has become a must, I think,” Cho said. “If in the early 2010s cable channels began to diversify, no platform itself is fluctuating — like YouTube, Netflix, Kakao M. If you can’t make a show that you want to make in one place, you can do that in some other platform. My job is to encourage and support them.”