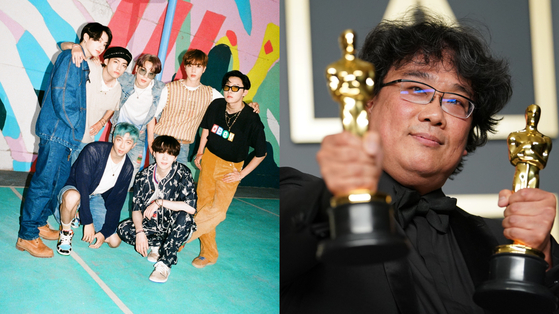 Korea recorded the first-ever half-year surplus in the trade of culture and arts copyrights, thanks to the global popularity of K-pop bands such as BTS, left, and of films including the Oscar-winning ’Parasite,“ right, the Culture Ministry said on Sunday. [BIG HIT ENTERTAINMENT, YONHAP]


Korea recorded the first-ever half-year surplus in the trade of culture and arts copyrights, thanks to the global popularity of K-pop bands such as BTS and of films including the Cannes Palme D’Ore- and Oscar-winning “Parasite” (2019) directed by Bong Joon-ho, the Ministry of Culture, Sports and Tourism said on Sunday.

The total copyrights trade balance, including for software, research and development (R&D) as well as for culture and arts, marked the record high surplus of $1.04 billion in the first six months of 2020, the ministry said, quoting an intellectual property rights (IPR) trade report released by the Bank of Korea on Friday.

Although the total IPR trades including those of industrial property rights marked a deficit of $750 million in the first half, the copyright trade surplus increased by $300 million year-on-year to the record high. The software and R&D copyrights trade surplus including for games and databases reached $967.8 million in the black. Culture and arts copyrights including those for music, TV series, films, visual art and literature, represented a $75.8 million surplus.

“This is the first time that culture and art copyrights balance marked a half-year surplus since the authorities began to compile the related data in 2010,” the Culture Ministry said in a press release. “In particular, the music and video [films and animations] copyrights showed a remarkable growth, seemingly helped by the global popularity of K-pop led by the band BTS and of the film ‘Parasite.'”

“The trade of culture and art copyrights marked a surplus despite concerns about the deterioration of trade balances due to the Covid19 pandemic,” Culture Minister Park Yang-woo said. “This means the competence of Korean culture and arts have been globally recognized.”