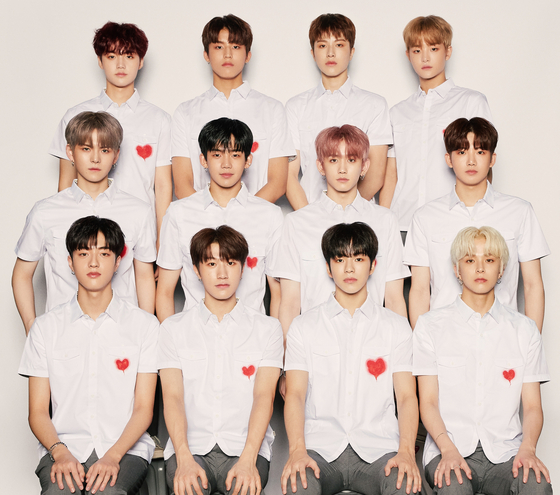 
It’s only been a month since YG Entertainment’s newest boy band Treasure made its powerful debut with “Boy,” but it’s back again — this time, sporting a level of teamwork that has heightened even more since its debut.

Treasure’s new single “The First Step: Chapter Two” dropped on Sept. 18, a month after its debut single “The First Step: Chapter One” was released on Aug. 7. The band’s first lead track “Boy” was a hip-hop base dance track that was enough to make an impact on the listeners with its dynamic melody and catchy lyrics. The band’s newest lead track, “I Love You,” takes that one step further.

“We wanted to grab the hearts of the listeners with a faster and more powerful sound than the debut track ‘Boy,’” said Doyoung in an email interview with the Korea JoongAng Daily. “It’s also our confession of our love to our fans.”

For “I Love You,” the 12 members of Treasure donned school uniform-style costumes to achieve a contrasting image of a young boy in love, who confesses his feelings with a powerful performance and cool look. “I Love You” carries a story that’s linked to “Boy,” where the members sing about their love in a straightforward manner. The group will be sporting various uniform costumes for the staged performances to come, all different in colors and style.

“It might be because we have a lot of members who are actually used to wearing school uniforms [because of our age], but we really liked this school-look style,” said Asahi. 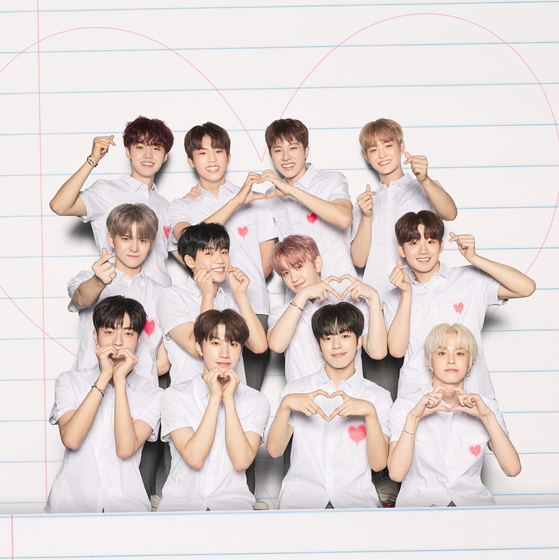 
Another change visible within “I Love You” is that the teamwork between the members has grown over the past month. This is evident from the choreography routine the band pulled off that requires even more skills and synchrony than “Boy.” Having 12 members may seem like a lot of work, but it’s that very diversity that makes Treasure all the more special, according to the band, which gave the answer as a whole group.

“We think that because there are 12 members, we can show people 12 different charms — and this is what makes us special. Our teamwork is great, because we’ve spent so much time together. And we think that people still like us from the content we’ve presented through our YouTube channel even before our debut, like the ‘Treasure Map’ reality series and the cover videos [of other acts’ music]. On the stage, we show our powerful side. In our reality content, we show our friendly side. I think people like us for this and believe in our potential,” the band said.

So Jung-hwan added, “The performance has become a lot more powerful than ‘Boy,’ and the movement of the 12 members has evolved to become more organically connected. And I also hope people will pay attention to the tough dance moves as well as the addictive lyrics. There’s a part in the refrain where we repeat the words ‘I love you’ and that’s the best part.”


Having to prepare for a song right after their debut may have been a challenge for the group, but it was worth all the hard work to be able to give more music to the fans, according to the group. Members Choi Hyun-suk, Yoshi and Haruto once again took part in writing the lyrics of the song, as well as “Bling Like This,” an additional track included with the single. To see their ideas turn into real music gives them a fulfilling sensation that makes them more proud to take part, said Choi.

“Every musical instrument does its job,” said Choi. “And I think Treasure is like an instrument in a way. Each instrument that cannot be replaced by any other comes together to make the best music. The three of us had so much fun, just as we did for the last release. We depended on each other and had fun together.”

Nearing the Korean Chuseok harvest holidays, members say they will be spending time together as usual — especially since the group includes four members who are Japanese and cannot visit home due to the coronavirus.

“Talking to the members helps me to relieve so much stress. I remember how Haruto would come and comfort me when I was distressed in the past. I felt very grateful,” said Park Jeong-woo.

So added, “There was a scene in the music video for ‘I Love You’ that we shot at the seaside. I want to travel to the sea with the members one day. The wind was so cool when we were shooting, and we got to make precious memories together.”

Treasure aims to grow to become a leading K-pop act just like the other big-name stars also signed to YG Entertainment such as Blackpink and Big Bang. Blackpink recently collaborated with pop star Selena Gomez for a single titled “Ice Cream” released last month, and Treasure hopes to follow in the girl group's footsteps.

Members Choi and Jihoon picked YG’s artists G-Dragon, Mino, Bobby and Taeyang to collaborate with, while Bang Ye-dam extended his wish to outside of Korea.

As the Covid-19 pandemic continues, the members of Treasure wished people health and safety, and to cheer up listening to their music. 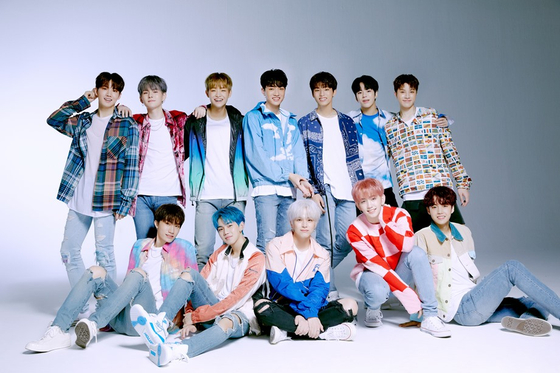 
“We are all going through hard times due to the prolonged Covid-19 pandemic, but you all know that staying safe and healthy is the most important thing, right?” said Jihoon. “I hope you can all stay healthy until the day we can meet again. Some people message us saying that we help them stay happy, and that makes us even happier and allows us to try harder. I hope the day comes soon where we can enjoy the stage together with everyone.”

Choi added, “Music is a powerful medium that can deliver both joy and consolation. We would like to sometimes give joy to people, and sometimes consolation, through our music.”

Treasure aims to finish “The First Step” series by the end of this year, with two more albums. The group will pursue a variety of promotional schedules, such as music programs and TV entertainment shows. Rather than going solo or forming subunits, the group will focus on the whole of Treasure for the time being, but options remain open for the future, the band said.