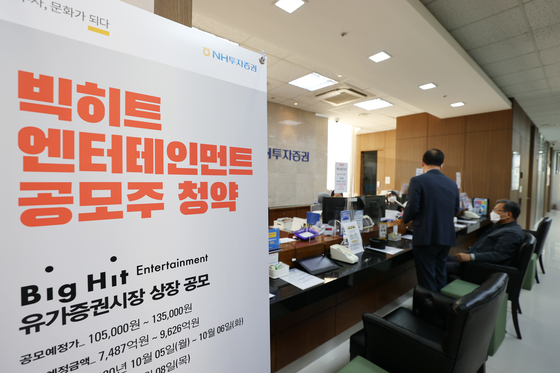 The BTS agency came close to the record for total deposits set by Kakao Games last month, but failed to break it.

Shares were oversubscribed at a rate of 606.97 to 1. The four underwriters took in a total of 58.4 trillion won in deposits.

Based on the finalized subscription rate, a 100-million-won deposit will yield two shares worth 270,000 won. In an IPO, the larger the deposit, the higher the investors' chance of receiving a single share of the company. The price per share is fixed and predetermined by underwriters.

Retail investors are being offered 20 percent of the IPO and could apply Monday and Tuesday.

Last week, institutional investors got their chance at 60 percent of the shares offered, and they were oversubscribed 1,117 times.

BTS’s entertainment agency said it will use the IPO funds to invest in future businesses and improve the facilities of its new headquarters located in Yongsan District, central Seoul.

Analysts say Big Hit’s IPO results are below expectations, considering institutions once expected around 100 trillion won in deposits for the entertainment company.

“Investors were not as passionate compared to the IPO of Kakao Games and SK Biopharmaceuticals, affected by a recent downturn in the stock market and the strengthening of acquisition tax for shareholders,” said analyst Sung June-won from Shinhan Investment.

“Considering its first trading day is more than a month away, there was anxiety over possible market risks. The general consensus, especially from institutional investors, was that Big Hit’s stock was overpriced,” he added.

Big Hit Entertainment will officially start trading on the Kospi market on Oct. 15.

The popularity of IPO stocks is heating up among retail "ant investors" looking for guaranteed short-term profits. Normally, the initial offered price for a share is 10 to 30 percent lower than its valued price, providing opportunities for investors to maximize profits if prices increase on the first day of trading.

In the case of SK Biopharmaceuticals, its starting price was set at double the initially offered price, the maximum limit allowed by the Korea Exchange, on top of which it increased by the market cap of 30 percent at the end of the first trading day. This means the return on investment for a single share of the company was 230 percent, explaining why so many ant investors jump on the IPO bandwagon for short-term profits.

“I don’t think the shares are going to yield much profit in the long run. I am planning to sell them off as soon as they start trading on the Kospi,” wrote one commentator, who said he had deposited 1.5 billion won three hours before Big Hit’s subscriptions closed Tuesday.

However, data shows that not all IPO shares yield large profits. There are cases of stock prices set lower than the initially offered price on the first trading day, resulting in losses.

Wonbang Tech, which was oversubscribed by 348.77 times last month, saw its first-day trading price drop by 11.5 percent from its initially offered price. The same was true for game developer Me2zzen, which saw its stock price drop 5.6 percent on the day of its Kosdaq debut.

Some IPO shares perform poorly in the long run. According to a report from the Financial Supervisory Service (FSS), share prices rose by an average of 9.2 percent by the end of the year for the companies that went public last year. This is much lower than the average increase of 27.5 percent these shares saw on the first day of trading.

Among them, 31 companies, or 46.9 percent, even suffered losses by the end of the year. The FSS warned that “high subscription rates do not guarantee future stock prices and should only be used as a reference” in making investment decisions.

In the case of Big Hit Entertainment, analysts are unsure about the long-term potential.

“Institutions are skeptical the entertainment company’s stock will yield big returns in the long run, as its profit heavily depends on the boy band BTS,” said Sung.

“If it grows Weverse and has other artists start using it, the fan platform will provide various profit pipelines for the agency, eventually transforming it into a comprehensive content platform like Spotify,” said analyst Park Yong-hee of IBK Investment & Securities.

The IPO market isn't set to calm down in the near future, as more big-name IPOs are lined up next year.