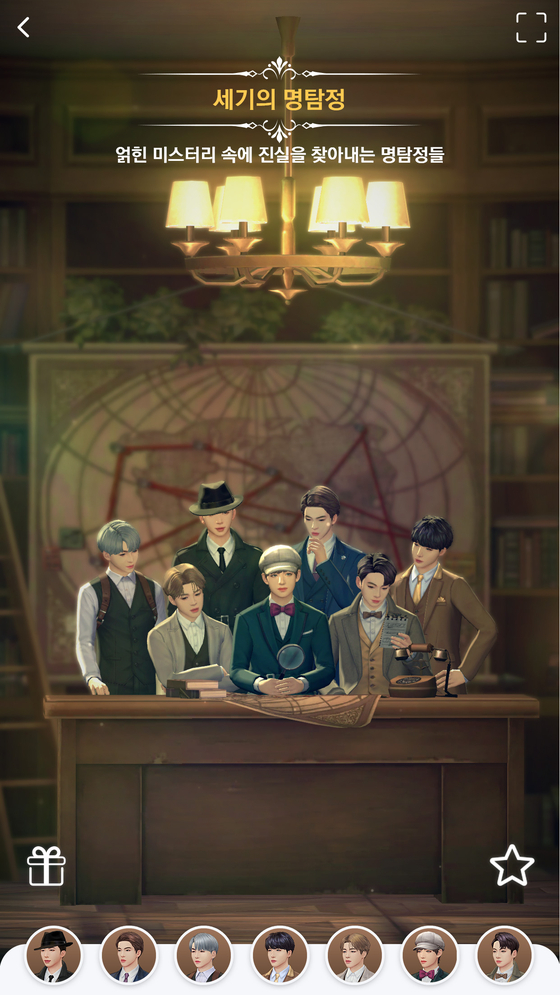 
BTS Universe Story, the second collaboration between game publisher Netmarble and K-pop megastar BTS, is definitely worth all the minutes and money any ardent ARMY member will spend on playing it — because they will have to spend both.

The 3-D social game released by Netmarble on Sept. 24 is simply put, fan fiction turned into a game. The idea is quite simple and similar to the first collaboration BTS World released last year. Players get to click through the storyline and make occasional choices, like what the characters say or do, to eventually reach an ending. Those choices are supposed to affect the outcome, but truth be told — the ending can never be reached without spending money.

While the first BTS game released last year was much anticipated by the general public and fans alike as perhaps the biggest collaboration between Korea’s major game publisher and hottest boy band, its sub-par outcome saw Netmarble’s market share price plummet by 20 percent two weeks after its release. Users complained that it’s really not worth much as a game: there’s nothing to do but to click through the lines that the members of BTS say, and the occasional choices users make don’t really seem to make big differences in the end results. Plus, it was almost impossible to proceed without spending money at some point. 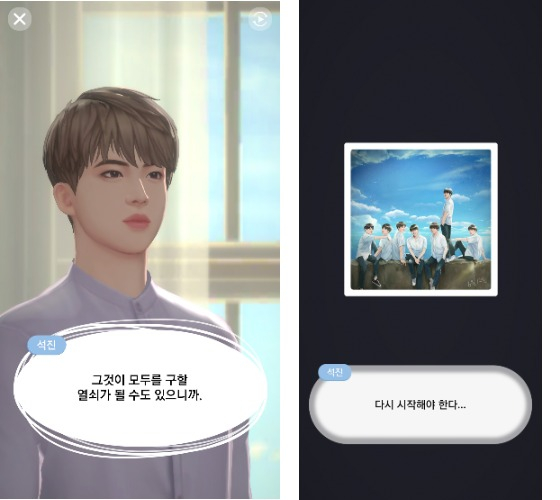 The official story released by Netmarble revolves around BTS Universe, or the fictional background story of BTS, where Seokjin, or Jin, left, must fix the wrongs of the past to bring everyone back together, right. Only one story of Namjoon, or RM, is free to play. [NETMARBLE]


Many of these criticisms are still evident in the new game. There’s not much to do game-wise and it’s impossible to play without paying. But if there is a difference, it’s that the money spent actually feels worth it.

BTS Universe Story takes on the click-through-the-story format like its predecessor. The storyline is a remake of the band’s famed BTS Universe, where the members have their own background story that unfolds with each new album, music video and other content. Compared to BTS World, which followed the story of BTS from pre-debut to debut, BTS Universe World delves into the fictional background of BTS, which was previously revealed through music videos, books and a webtoon series.

The first and the only free plot open to new users is the story of how Jin and RM meet, and the story of Suga and Jungkook can be opened with 200 “jewels.” Thirty jewels cost 1,200 won or can be earned through various events offered in the game, which are usually time consuming or involve watching advertisements. More updates are scheduled by the end of this year, according to Netmarble. 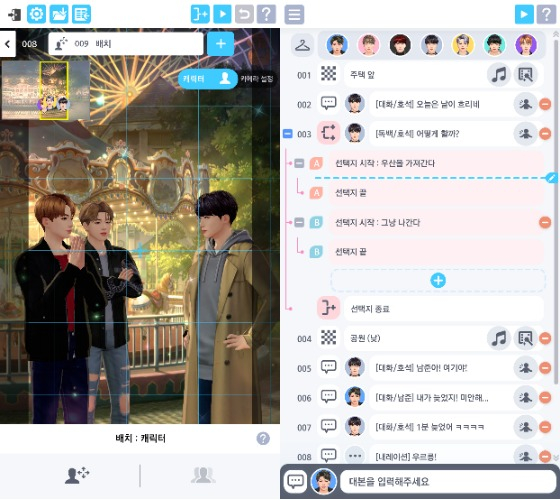 The story creation mode within BTS Universe Story, allows users to create their very own stories down to the smallest details, like where the characters stand, how they move, what they say and what facial expressions they have when they say it. [NETMARBLE]


The high-quality 3-D animations of the seven members aren't the only attraction, however. Users have the option to create their own storylines, independent of the ones offered in the game. Users can produce their own scenarios using all of the members, change their movements and facial expression, dress them and place them in different settings.

Some high-quality and popular scenarios made by users include those where Suga is a detective, a story where Jin is summoned as a demon prince by a magic trainee V and a story where astronomer RM is visited by alien V.

Players' reviews read that it's like a “3-D fan fiction game” that allows anyone to fulfill their secret fantasies with the seven members. Some users have expressed their concerns that allowing any sort of story to be made may result in over-the-line promiscuity or defamation against members, but Netmarble assured that it is monitoring the game for any inappropriate content and will take corresponding measures if necessary.

But to fulfill any fantasies, secret or not, there is a catch. Users must use a “ticket” to open up an episode of a scenario created by another user, and occasionally pay them with jewels to make certain decisions within the game. The game offers users four tickets per day, which each take six hours to regenerate if they are used. Alternatively, users can pay for tickets for the price of six jewels. There are discount offers and special events that offer these jewels and tickets for free. If you manage to sum up a story that intrigues enough people, you get paid back with the jewels and tickets other people spend on your story — so don’t give up.

Netmarble might not know how to make a game that charms people into voluntarily opening up their wallets and must force people into doing it, but at least this BTS Universe Story is an expensive playground that pays you back with the experience you get inside it. 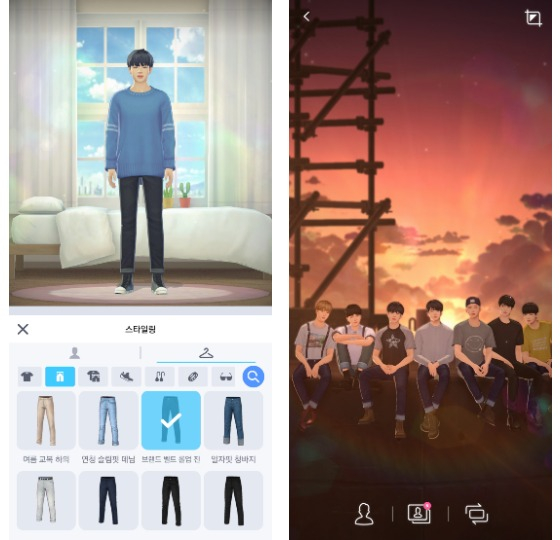 Users can change each members' outfits, left, and take pictures with them all together against different backgrounds, right. [NETMARBLE]