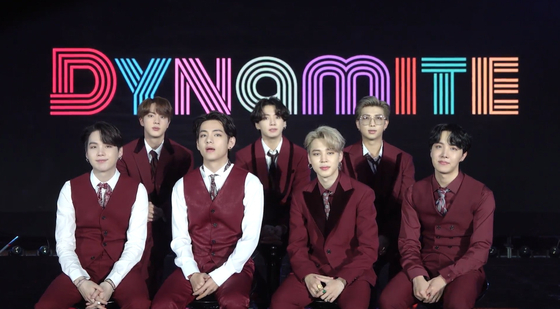 
A BTS drama set to air next year, which stars none of the seven members, has left fans reeling and demands for producers to change the names of the characters from the real names of the members of BTS to fictional ones continue to flood in online.

On Monday, drama production company Chorokbaem Media confirmed the lineup of seven actors who will be playing the seven characters of drama “Youth,” which will be based on the BTS Universe (BU), or the fictional storyline of the band that gives each member of BTS a fictional background story and identity. The BU has been the source for various content over the years such as games and webtoons, and had been welcomed by BTS fans, known as ARMY, for adding more fun to the band’s music.

Since it’s based on the same BU storyline used for the Netmarble social game BTS Universe Story and the 2019 Naver webtoon “Save Me,” the overall gist of “Youth” is familiar to BTS fans — but not so much to the general public. 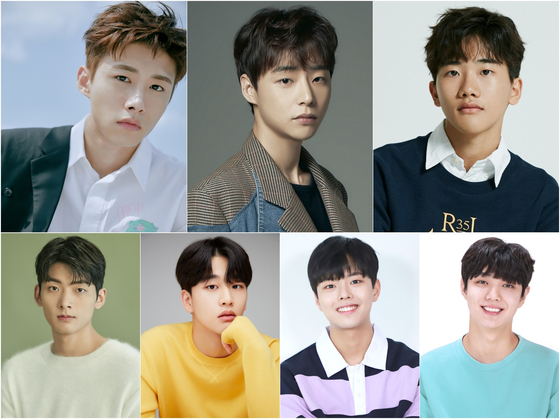 The lineup of actors to be featured in the drama "Youth," clockwise from top left: Seo Ji-hun as Kim Seok-jin, Ro Jong-hyun as Min Yoon-gi, An Ji-ho as Jung Ho-seok, Seo Young-ju as Kim Nam-joon, Kim Yun-woo as Park Ji-min, Jung Woo-jin as Kim Tae-hyung and Jeon Jin-seo as Jeon Jung-kook. [EACH AGENCY]

The producers of the drama explained that the program will deal with “the maturing period of seven young and vulnerable boys,” who each carry their own “secrets and scars” but learn to love each other and then grow together. It will be directed by Kim Jae-hong, who was behind drama series “Your Neighbor's Wife” (2013) and “Steal Heart” (2014), while the script was written by Kim Su-jin who also wrote “Weightlifting Fairy Kim Bok Ju” (2016) and “Dazzling” (2019).

Following the news, fans of BTS immediately expressed anger. Concerns arose about the use of the members' real names for the characters who go through traumatic events in the story as well as the expectation that fans would like the series simply because it's vaguely related to BTS, although none of the members are involved. 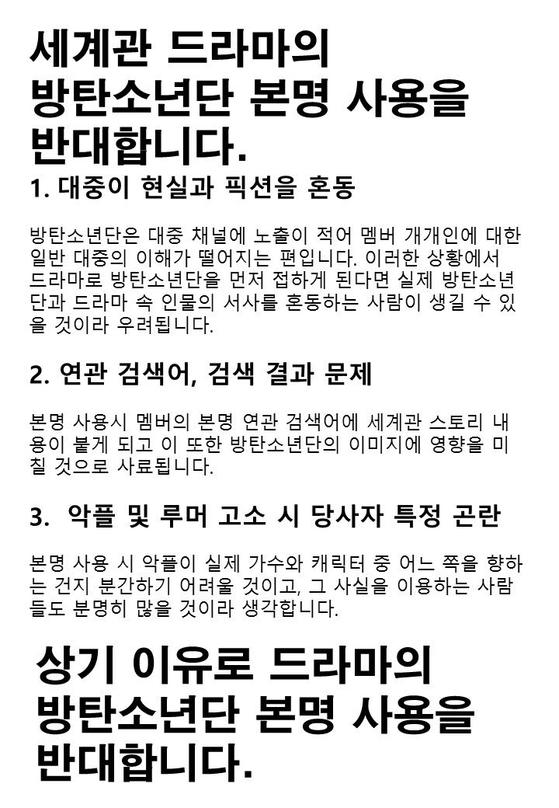 The image that thousands of fans have uploaded on Twitter since Monday, with the hashtag ’no_to_drama_real_name“ (translated). [SCREEN CAPTURE]


“We oppose the usage of the real names of BTS in the BU drama,” reads an image that thousands of fans have unanimously uploaded since Monday through Twitter, with the hashtag “no_to_drama_real_name” (translated). Fans explained that the public will easily confuse the real BTS with the fictional background story, thinking that the story is true, and having the characters’ names searched on the internet will create a chaotic distraction for both the drama and the members of BTS.

Most importantly, it will expose the members of BTS to malicious comments and online rumors more than ever before, according to fans. The BU deals with traumatic issues such as suicide, assault and even murder — some committed by the characters themselves —, and having the internet link such matters directly to the members of BTS may lead to the members’ reputations as stars being damaged. In the BU, all seven characters are victims of dramatic lives, such as Jung Ho-seok, who was abandoned as a child, Kim Nam-joon, who struggles due to poverty, and Kim Tae-hyung, who is abused by his alcoholic father.

ARMY, the official fan club of BTS, released a statement on Monday which claimed the drama “severely goes against human rights” and condemned it for “not treating BTS members as humans but only as a money-making means, thereby infringing on their human rights and defaming them.” The statement demanded that the production be canceled altogether. 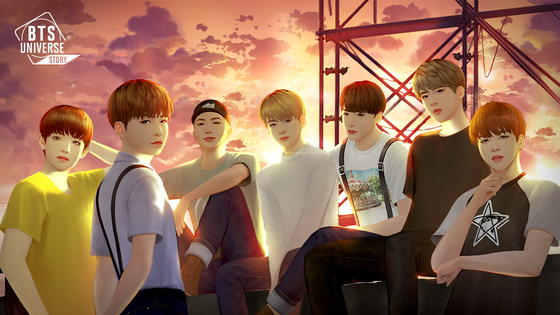 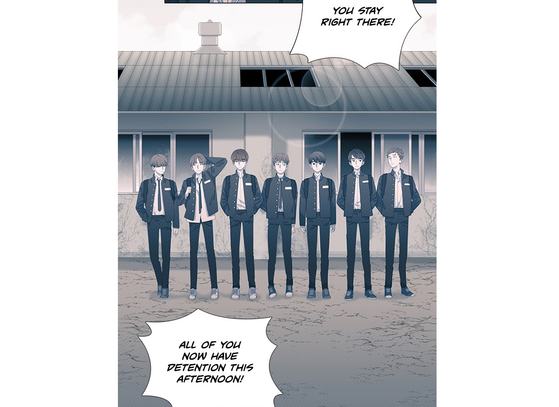 A captured image from the 2018 Naver Webtoon "Save Me," based on the BTS universe story. [SCREEN CAPTURE]


“There are already malicious comments online that say, ‘What if Jungkook commits suicide’ or ‘Has Jimin been molested as a child?’ on the pretense that these are the things that will be included in the drama,” read the statement. “Big Hit [Entertainment] has created a story that’s irrelevant to the members and has tarnished them with dark and brutal life stories. [Members of BTS] have no reason to be subject to such image and the agency must stop this atrocity.”

Others pointed out that the agency seems to think that fans will buy anything that has the name BTS on the box. While that may have been true until now, using other people to act out the members of BTS — even if it’s fictional — has crossed the line, some say.

“We liked the BU story because it was related to BTS,” said an ARMY member who wished to remain anonymous. “But the agency seems to have misunderstood. Do they think we liked BTS because of BU? It even looks like they want to believe that it was the story that made BTS and not BTS themselves.”

Regarding the concerns, Big Hit Entertainment explained that all questions on the drama should be directed at Chorokbaem. In a statement Wednesday, the PR agency representing Chorokbaem said “no decision on the matter had been reached.”