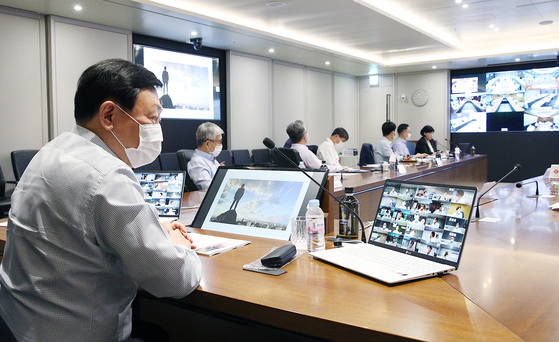 Lotte Chairman Shin Dong-bin at a meeting with his company officials in Jamsil, southern Seoul, in July. [YONHAP]


Nikkei reported Monday that Suga lunched with Shin the previous day near his official residence in Tokyo. Shin was joined by two chiefs of major Japanese companies. They reportedly had lunch with Suga for around an hour.

Shin, who has had ties with Japanese politicians for years, is the first big Korean businessperson to meet Suga since he took office last month, succeeding predecessor Shinzo Abe, who resigned over health issues.

No details about Shin's discussion with Suga have been reported. Analysts speculated they may have talked about ways to revive tourism in Japan amid the continued economic slowdown from Covid-19.

Lotte, which is the fifth largest conglomerate in Korea, operates retail stores, including duty-free and department stores, hotels and a confectionery business.

With businesses in both Korea and Japan, Shin often travels between the two countries. Shin left for Japan in August and has been there since.