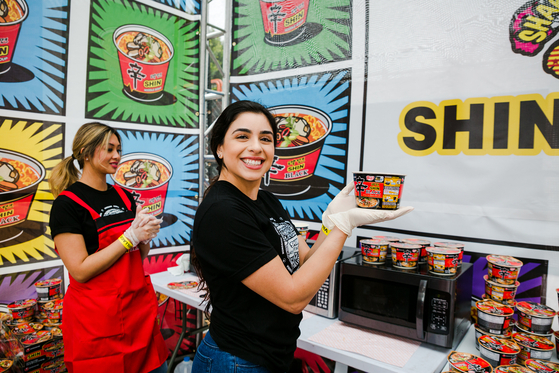 Nongshim is selling record amounts overseas as demand for instant noodles soars as people spend more time at home because of the pandemic.

Nongshim, best known for spicy Shin Ramyun and black-bean noodle Chapagetti, said it estimates its overseas sales this year will grow 24 percent on year to $990 million. Sales in the United States and China led the growth, the company said Wednesday.

Shin Ramyun's overseas sales this year are projected to rise 30 percent on year to $390 million, accounting for almost 40 percent of Nongshim’s overseas business.

“Since early this year, sales of Korean ramyeon, from Shin Ramyun to Chapagetti and Neoguri, have increased,” said Nongshim in a statement Wednesday. “As Covid-19 rapidly spread across the United States and Europe, along with the increased demand for convenient food, ramyeon consumption has jumped.”

In the European market, ramyeon was particularly popular in Britain and Germany.

Before Covid-19, ramyeon was considered a snack, but has been accepted as a meal following the virus outbreak. This boosted sales, according to Nongshim.

“One of the important effects of Covid-19 is that people started paying more attention to healthy food, which led people to choose higher quality ramyeon,” said a spokesperson for market research firm Euromonitor International. “That has accorded well with the Shin Ramyun brand.”

There are variations of Shin Ramyun, including a non-fried type that is supposed to be somewhat healthier.

Nongshim’s goal is to reach $1.11 billion in overseas sales next year, up 12 percent from estimated sales for this year.

According to Euromonitor International, Nongshim ranked fifth in global ramyeon sales last year, accounting for 5.3 percent. It is estimated to maintain the same spot this year but with a slightly larger 5.7 percent market share.

Kang Shi Fu, or Master Kong, based in China, ranked number one last year with a 13.3 percent market share, and is projected to maintain its top spot this year.