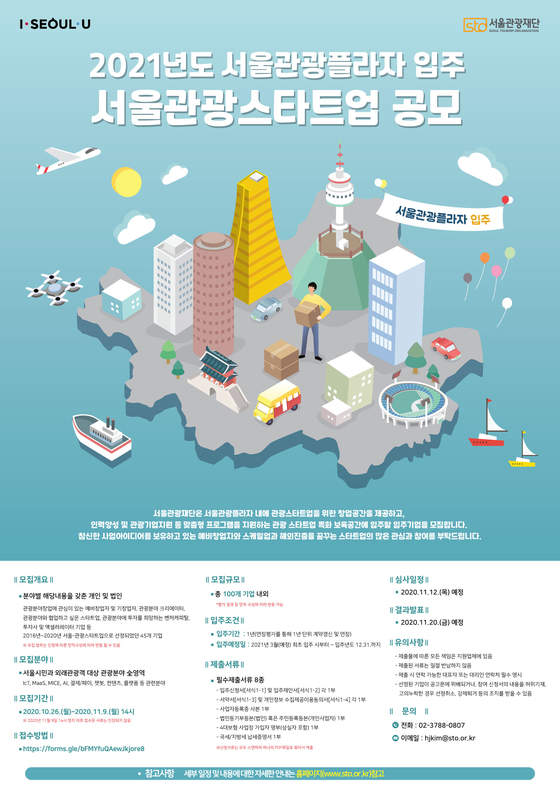 Mobile application developers set on making travel across Korea easier and more convenient than ever before continue to unveil new services despite the pandemic, and the Korea Tourism Organization, in hands with SK Telecom, has chosen 10 of the best new ideas to apply to the market.


In a competition that attracted 284 entries offering ideas, about double the number of participants than last year, local developers aimed to maximize the use of location services in order to provide whatever information is most necessary and advantageous for those visiting certain spots. The ideas also focused on cutting down on the time it takes to find things available in the area being visited.

The top award went to the team which invented “SPOT,” an application that provides information about places to visit around baseball stadiums where the national league plays its games, given that many baseball fans may want to look for a place to eat or drink after the game, especially those that travel from other cities and have less information about the city where the game is being played.

The fact that the system used for the application is expandable and can be applied to any other cultural or athletic spots was another factor that helped lead the team to victory.

The runner up was Mapsee, whose name sounds similar to the Korean word mapsi, which means stylish in something. Mapsee offers help making a one-of-a-kind travel route with information scattered all over social media. It helps curate personal itineraries based on the most popular routes that have been posted online.

Kravel, which offers information on all kinds of spots where Korean dramas, movies or music videos of K-pop stars were filmed, won the special prize for services offered in English. The app, also available in Korean, highlights some of the everyday spots Korean pop stars go to, for fans hoping to catch a glimpse of their favorite singers and actors.

Others that were honored included Guiving, a service that matches a driver and a car to tourists who want to refrain from using public transportation or paying for a taxi.

For those who want more in-depth information about food around Korea, an app called ade will come in handy. Travelers can take a photo of a menu, which the app will not only translate, but also provide more information of certain items listed on the menu in English.

To further inspire others who didn’t take home any prizes and invite more to pitch ideas to make traveling in Korea more fun and convenient, the Seoul Tourism Organization is also recruiting travel start-ups which need an office space to help get their businesses up and running.

It is looking for tenants for its new building, which is tentatively called the Seoul Tourism Plaza, which is set to open in Jongno District, central Seoul, in March. Anyone trying to conduct business related to tourism, ranging from content creators to investors who want to be connected to start-ups, can apply to be part of the new office space.

Applications are being accepted until Nov. 9 at 2 p.m. Those who are accepted will be able to use the space from March, and be able to renew every year if they pass an evaluation.

For more information about the program, go to Seoul Tourism Organization’s website at www.sto.or.kr.