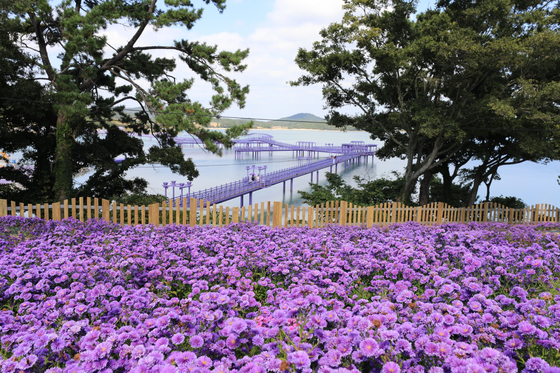 The Purple Island in South Jeolla's Sinan County was listed as one of the Best Tourism Villages by the World Tourism Organization under the United Nations on Thursday. [KOREA TOURISM ORGANIZATION]


The Purple Island in South Jeolla’s Sinan County and Ungok Village in North Jeolla’s Gochang County have been named on the list of Best Tourism Villages by the World Tourism Organization under the United Nations on Thursday. This year's inaugural list included 44 villages from 32 countries.

“It was launched to advance the role of tourism in safeguarding rural villages, along with their landscapes, natural and cultural diversity, and their local values and activities, including local gastronomy,” said the organization.

“This particular initiative recognizes the villages committed to making tourism a strong driver of their development and wellbeing.”

The organization recognized villages with populations of fewer than 15,000 from June to September. Each country was able to enter up to three villages for consideration. A total of 174 villages from 75 countries competed.

Sinan County intentionally painted the villages on two of its islands — Banwol and Bakji  — purple in a bid to attract more visitors. Almost everything from the walls and roofs of buildings to the outdoor benches and bridges are all purple, and flowers planted in gardens and alongside the roads are also the same color. There is a 5,000 won ($4.20) charge to enter the island, but that fee is waived if you wear purple clothes, shoes, or hats or carry a purple umbrella. Purple scarves, bags, socks and handkerchief don’t count.

Ungok Village is known for its damp and dolmens. The international organization recognized locals' efforts to live more sustainably, such as running an eco tour and offering meals made with local ingredients.