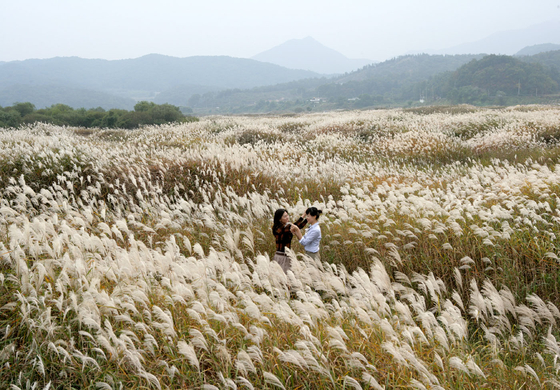 This field of reeds in Chungju, North Chungcheong, is a nice spot for those who want to see some less typical fall landscapes, away from red and yellow leaves. [KOREA TOURISM ORGANIZATION]


The time is quickly approaching in which the entire country will be enveloped in many tones of red and yellow foliage. This year, Korea Forest Service forecasts that the leaves will turn color from late October, inspiring more city dwellers to venture out to the forests and countryside.

Jeju Island, one of the most popular travel destinations, will welcome their fall colors a little later around Nov. 4.

Of course, these dates are subject to change depending on the changes in temperature during the next few days until then.

For those looking for a place to soak in the last bits of warmth before the cool starts to set in, the Korea Tourism Organization released 25 trip ideas for the fall season. These spots are lesser known even among avid travelers, so there should be no need to worry about crowds while enjoying gazing out at the fall colors out in the woods.

One thing travelers will need to check on before head out, though, is whether these places are still open. With the fickle pandemic situation and constantly changing social distancing regulations, travel spots often alter their opening schedules or limit the amount of people who can be on the premises at one time. 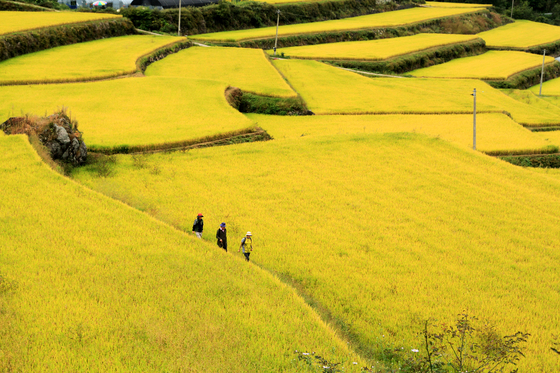 Mount Jiri, one of the mountains is expected to change its colors the earliest, brings in many visitors looking to experience the fall foliage. [KOREA TOURISM ORGANIZATION]


Mount Jiri, Korea's first-ever designated national park, is the second highest mountain in South Korea, after Mount Halla on Jeju Island. Its trekking course that goes around the mountain as opposed to going up is popular among those who just want to feel the forest ambience and don't mind not seeing the view from the top.

The entire trekking course connects five cities and counties in three different provinces including North and South Jeolla as well as South Gyeongsang, and is 284.3 kilometers (176.7 miles) long. There are 21 different courses to choose from. Course No. 3, which connects Inwol in Namwon, South Jeolla, to Geumgye in Hamyang County, South Gyeongsang, is one of the more popular trails for the fall. 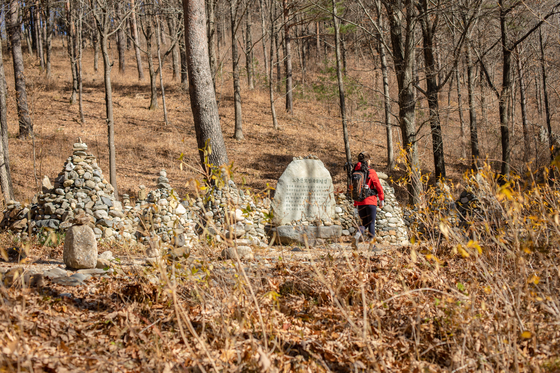 
To experience the ultimate red-tone mountain landscape, head to Mount Nochu in Gangwon, bordering Gangneung and Jeongseon. The most popular trail is Mojeongtab-gil, which is filled with stone towers said to have been made by one woman piling the stones up over 26 years, wishing for her family’s well-being. Hikers can take a break from time to time from looking up at the foliage and check out the stone towers. 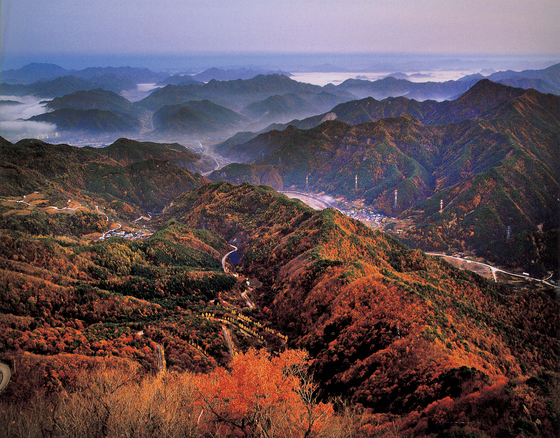 
Another autumnal hiking hot spot is Mount Jeoksang in Muju County, North Jeolla. There are many historical spots there, including Mount Jeoksang Sago, where royal records from the Joseon Dynasty were stored, alongside observatory spots including a lake and a fortress.

Away from the typical red and yellow tones covering the mountains, Chungju in North Chungcheong sports the more neutral autumn tones of white and brown with its fields of reeds. Binae-gil, filled with such reeds, has two courses: the first and more popular course takes around two hours and brings visitors to the flat areas and the second course takes four hours. 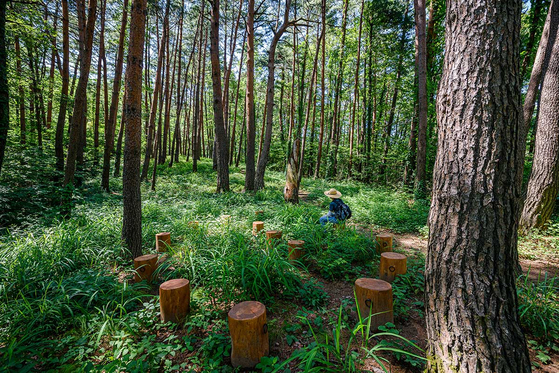 Samcheok's Healing Life Forest offers some greenery even during the fall season for those who want to experience the feel of being in a traditional forest. [KOREA TOURISM ORGANIZATION]


A display of green and white colors can be seen at Samcheok’s Healing Life Forest with its variety of green trees, including birch trees with their white bark. Inside, the forest has 15 different trails: Some are along the waterways for those who want to listen to the sound the water makes, while others are particularly windy, giving trekkers a nice breeze to accompany them. The trails inside the forest are well-paved for an easily-accessible and mild-walking experience. A variety of programs, like group stretching inside the forest or drinking tea brewed with flowers grown in the forest, is available. 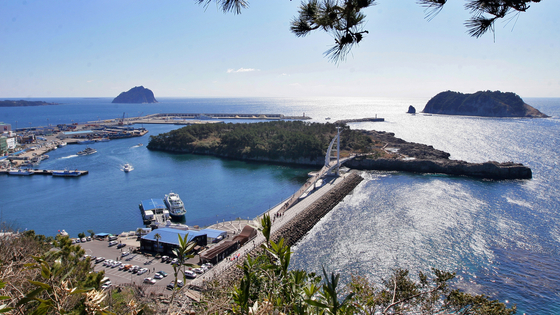 The Hayoung Olle trail in Seogwipo, Jeju, offers both urban and natural scenes from the town located by the sea. [KOREA TOURISM ORGANIZATION]


For those looking forward to a view of the sea away from the mountain-heavy inlands, Jeju Island has something to offer. One of the lesser-known destinations is Hayoung Olle, a trail that takes visitors around Seogwipo city — from the areas by the sea to the alleys of the local markets. It has three courses: The first one focuses on showing nature and ecotourism, passing by waterfalls and eco parks, while the second course shows more cultural heritage and food. The third one shows the lifestyle of locals the small streams in each neighborhood.

Chagui Island is another Jeju Island spot recommended by the state-run travel organization, as the entire island is a designated protected area.

South Jeolla has two spots on the list of 25 places to visit, including Geumseongsanseong, also known as the fortress of Mount Geumseong. Byeolseo Jeongwon in Gangjin County is known for its 12 different landscapes that mesmerized Joseon-era scholar Jeong Yak-yong.

North Jeolla, besides its Mount Jiri, also has Namjigae Biri-gil.

Gwangju Metropolitan City shows its artsy side with Gwangju Folly, a project that has put many different artworks across the city.

Seoul has one spot recommended to visit in Dobong District, northern Seoul. Trekking courses in Mount Dobong overlap the trails of Mount Bukhan, or eight of the 21 courses of Mount Bukhan. Out of the eight trails in common with Mount Bukhan at Mount Dobong, the last two, No. 19 and No. 20, are particularly recommended to visit in the fall. In the middle of the walk, trekkers can stop by the house Jeon Hyeong-pil, who established Kansong Art Museum with his private collections, many of which are national treasures.

For more details on each of the 25 recommended destinations, go to www.visitkorea.or.kr or call travel hotline 1330. The call service is available every day, 24 hours a day, in four different languages: Korean, English, Chinese and Japanese. The service offers travel information and does requests to interpret over the phone. Calls in Russian, Vietnamese, Thai and Malay/Indonesian are available every day from 9 a.m. to 7 p.m. The chat service over text is available in four languages: Korean, English, Chinese and Japanese.