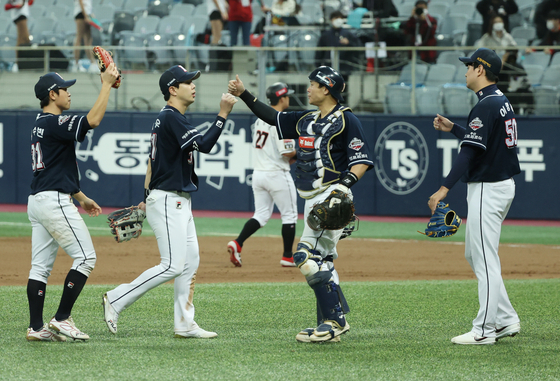 The Doosan Bears celebrate after picking up a 4-1 victory against the KT Wiz during Game 2 of the postseason series at Gocheok Sky Dome in western Seoul on Tuesday. [YONHAP]


The Doosan Bears are proving unstoppable in the postseason.

Having swept the LG Twins in the first round, the Bears are continuing their dominance in the second round of the playoffs against the second-ranked KT Wiz.

In the best-of-five series, the Bears have won the first two games — 3-2 on Monday and 4-1 on Tuesday — at Gocheok Sky Dome in western Seoul to take a 2-0 lead in the series. The Bears now only need to pick up one more win to advance to the Korean Series, where they’ll face the regular season champion, the NC Dinos.

The Wiz are hanging on by their fingertips, as they have to win the next three games to make it to the Korean Series for the first time. Technically, the Wiz have just lost their two games as the home side, but as neither team actually plays at Gocheok Sky Dome, the distinction is a lot less important this season.

The Bears came back again with one more at the top of the ninth and the Wiz weren't able to catch up, allowing the Bears to squeeze past for a 3-2 win.

Game 2 was a different story, with the Bears appearing much stronger against a KT Wiz team that struggled to get moving.

Doosan got off to an early start, picking up single runs at the top of the second and the top of the third to take a 2-0 lead. The Wiz fought back with a one-run homer from Mel Rojas Jr. at the bottom of the third, but were shut out for the rest of the game.

The Bears extended their lead with two more runs at the top of the fifth. With neither team managing to deliver in the final few innings, the game ended with the score at 4-1.

While Oh Jae-won’s performance stood out in the first round of the postseason, so far in round two it's Bears' slugger Kim Jae-hwan that has proved crucial to his team's success. In Tuesday’s game, Kim added a run, three RBIs and three hits in five at-bats, good enough to record a .600 batting average for the game.

Earlier in Game 1 against the Wiz, Kim had a .500 batting average with two hits and an RBI.

“I was confident I could make contact and took an aggressive swing,” Kim was quoted as saying on Yonhap.

The performance of the Bears' bullpen was also notable in Tuesday's game.

Despite having a notoriously unreliable bullpen, the Bears pulled starter Choi Won-joon from the mound after the Rojas homer in the third inning, using five relief pitchers over the next six and one-third innings. Defying expectations, the Doosan bullpen came through, shutting down the Wiz's powerful sluggers at every turn.

Heading into Game 3 with a two-game advantage, Bears’ manager Kim Tae-hyoung is hoping to end the series on Thursday so his players can get enough rest before the Korean Series next week.

“We’ll try to go all in and try to finish the series in three games,” Kim was quoted as saying on Yonhap. “The sooner we take care of this series, the better it will be for us [in the Korean Series].”

While Kim is hoping to end the series as soon as possible, Wiz manager Lee Kang-chul is hoping to see his players' confidence return in the upcoming game, regardless of the score.

“We kept it close, but when we failed to score early, the guys started to press a bit,” Lee was quoted as saying. “It’s my fault for setting the lineup that way.”

For the young Wiz, finishing second in the regular season was an upset, as until this year they have always been considered one of the weaker teams in the league. As this is the first time for manager Lee and a lot of the Wiz players to appear in the postseason, they seemed to struggle to adjust to the quick nature of the postseason series, as they haven’t been able to score as much as they did in the regular season.

Even Wiz starter Odrisamer Despaigne struggled in his very first KBO postseason appearance, as he had a 9.00 ERA, giving up seven hits and four runs while striking out three throughout four innings.

However, the Wiz saw potential from their Game 1 starter, rookie So Hyeong-jun. Starting as a rookie pitcher in Game 1 of the playoff was quite a surprise, but So proved he deserved the spot. Throughout six and two-thirds innings, So had a 0.00 ERA as he only gave up three hits and a walk while striking out four.

Despite So performing above expectations, the Wiz walked away with a disappointing loss in Game 1 as their bats stayed silent.

For Game 3, it’ll be a match-up between two foreign pitchers. The Bears will have Raul Alcantara on the mound while the Wiz will start things up with William Cuevas.

This is also an interesting match-up between the two pitchers as Alcantara played for the Wiz alongside Cuevas until last season. Alcantara made his KBO debut with the Wiz in 2019.

During the first round of the playoffs, Alcantara started against the Twins on Nov. 5, but as it was his first time in a KBO postseason game, he wasn’t able to live up to expectations. Throughout four and one-thirds of an inning, Alcantara gave up six hits, four runs and two walks while striking out just one.

With that difficult game already over, Alcantara is expected to be back on form on Thursday. He finished the 2020 season with a low 2.54 ERA with 20 wins and only two losses throughout 31 starts.

For Cuevas, it’ll be his second appearance on the mound in the postseason, and, like Alcantara, he has set his sights on redemption. During Game 1 of the series, Cuevas appeared on the mound as a relief pitcher, but gave up two runs throughout two-thirds of an inning and currently has a 27.00 ERA for the postseason.

The Wiz are hoping that things will be different once he gets back to his usual position as a starter. This season, Cuevas helped the Wiz finish second by picking up 10 wins and eight losses with a 4.10 ERA throughout 27 starts.

Once again, Game 3 will resume at 6:30 p.m. on Thursday at Gocheok Sky Dome, with Game 4 set for the same time on Friday if needed. If the Wiz are able to win both games, Game 5 will be on Sunday, once again at Gocheok.