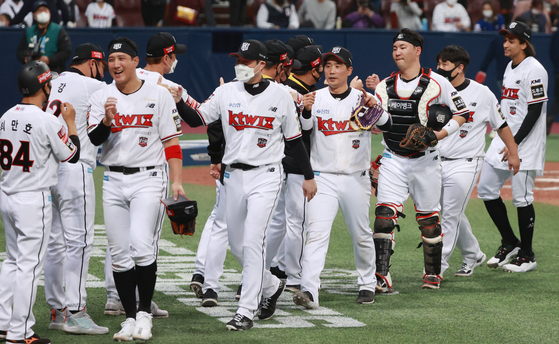 KT Wiz players celebrate in Gocheok Sky Dome in western Seoul on Sunday as they defeated the Doosan Bears 4-2 to open the Korean Series. [YONHAP]


Starter William Cuevas tossed 7 and two-thirds strong innings and No. 7 hitter Bae Jung-dae smacked a tie-breaking solo shot in the seventh, as the KT Wiz defeated the Doosan Bears 4-2 to open the Korean Series on Sunday.

Young slugger Kang Baek-ho went 3-for-3, and his RBI single helped the Wiz turn a 1-1 tie into a 4-1 lead in that decisive seventh inning of the South Korean baseball championship series at Gocheok Sky Dome in western Seoul.

The KBO is staging the entire best-of-seven series at the dome to protect players and fans from cold mid-November conditions.

There have been 38 Korean Series before this year, and Game 1 of the 1982 series ended in a tie. Of the remaining 37, teams that won the opening game went on to win the title 28 times.

This is the first Korean Series for the Wiz, while the Bears are playing in a record seventh straight Korean Series. They won it all in 2015, 2016 and 2019.

Sunday's game had all the makings of a pitching duel in the early innings. The Wiz starter William Cuevas was at his efficient best in keeping the Bears off the board for the first four innings. The Bears had runners at second and third with one out in the fourth, but Cuevas struck out the next two batters to clean up the mess.

His Bears counterpart, Gwak Been, held the Wiz to one hit through three innings. But the Wiz finally solved him in the fourth inning.

Their first two batters reached on a single and an error. A sacrifice bunt placed the runners at second and third for Jang Sung-woo, who knocked in the game's first run with a sacrifice fly to center.

The Bears responded with a sacrifice of their own in the top fifth. Kang Seung-ho smoked a triple off the center field wall, and No. 9 hitter Kim Jae-ho brought him home with a fly ball back to center field.

With a runner at second for the Wiz in the bottom fifth, Bears center fielder Jung Soo-bin made a spectacular diving catch on a sinking liner by Cho Yong-ho, robbing him of an extra-base hit and keeping the game tied at 1-1.

Bae Jung-dae then broke the deadlock with a solo home run off Lee Young-ha, the second Bears pitcher who'd come on in relief in the sixth.

At 0-1 count, Bae turned on a hanging slider and deposited it into left field seats for his first career postseason home run.

No. 9 hitter Shim Woo-jun kept the inning going with a single. He later stole second and moved to third when Cho Yong-ho reached on a fielding error by shortstop Kim Jae-ho.

With men at the corners, Hwang Jae-gyun drove in a run with a grounder to short. Then facing new pitcher Lee Hyun-seung, Kang Baek-ho lined a single down the left field line to open up a 4-1 lead.

And that was more than enough for Cuevas and the rest of the Wiz's pitching staff. Cuevas got the first two outs of the top eighth before reliever Jo Hyun-woo retired cleanup Kim Jae-hwan with a runner at first.

Closer Kim Jae-yoon came on in the ninth and survived some dicey moments before wrapping up the win.

Cuevas struck out eight and scattered seven hits while walking none for his second career postseason victory.