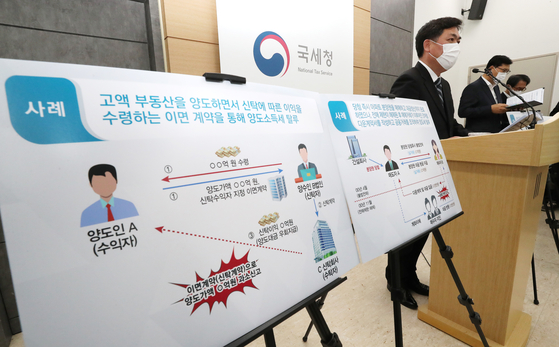 National Tax Services officials on Tuesday at the government complex in Sejong announces investigation on 85 people in their 20s and 30s suspected of dodging taxes in the process of buying apartments. [YONHAP]

It identified 85 people in their 20s and 30s suspected of underpaying their obligations, many of them using properties to get around the law. The most used trick was receiving help from parents to buy property but not properly reporting this support.

Buyers of properties are now required to report their source of funds to the Land Ministry.

Among those investigated included a parent who owns multiple residential units who tried to avoid paying the capital gains tax and inheritance tax by selling the preconstruction apartment rights to a son at below market value.

Another case involved a homemaker who bought an apartment in her name with funds from her husband, but did not properly report where the money came from.

In one case, a 20-year-old borrowed money to purchase an apartment. He had to borrow the rest from his father. But when reporting the source of funding to buy the apartment, he did not specify where the money was coming from, only jotting down “loan.”

The NTS saw this as falsifying the report and is charging an inheritance tax.

A man in his 30s bought a small residential housing unit and took on the mortgage taken out by the previous owner, but once the transaction was complete, all the outstanding debts were paid.

The NTS found that the new buyer didn’t have the money to pay off all the debt nor the ability to service the loan and discovered that it was the mother who paid off the debt.

“Since the debt was paid by the mother, it should be considered as money that has been inherited, and therefore [the buyer] has to pay the inheritance tax,” said Kim Gil-yong, director at the NTS real estate taxation division.

Since September, for all apartments purchased within areas that are labeled overheated or speculative regardless of their price, a report must be sent to the government on how the buyer is financing the purchase.

The rule was announced in June this year.

Apartments with a market value below 300 million won ($271,000) had been exempted. For other areas that are not regulated by the government, the bar was 600 million won.

The NTS investigation was a response to a significant increase in young people buying properties in recent years as apartment prices have skyrocketed.

While in the past the main buyers of residential real estate were older, as apartment prices have been rising sharply, many young people in their 20s and 30s have been rushing to the market for fear of missing out.

Some even used loans that were supposed to be used for jeonse, or long-term deposits.

According to the Korea Appraisal Board, in September people in their 30s accounted for 37.3 percent of apartment buyers in Seoul. This is a record high since related data were first compiled in January 2019.

It is also the largest group that purchased apartments in Seoul, even exceeding the 40s age group.

People that are in their 20s or younger accounted for 4.3 percent, which is also a record high.

The NTS said it will also continue to monitor people who were financed by their parents when purchasing apartments. If they do not pay back the money, they would have to pay taxes on the inherited amount.

The tax agency said it will also expand its investigations to track down the source funds, including whether the parents have financed the investment through embezzlement.

It will also look into cases where the actual purchase or sales have been reported at a lower amount in order to lower capital gains taxes.

Those found to have done so will be reported to prosecutors.