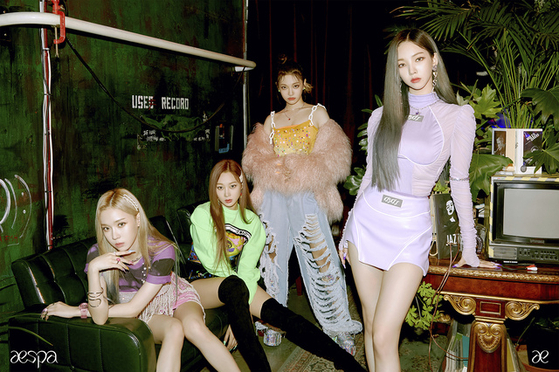 
SM Entertainment's new girl group aespa made its official debut with the drop of its single “Black Mamba” at 6 p.m. on Tuesday, its agency announced on the same day.

Consisting of four members; Karina and Winter of Korea, Giselle of Japan, and Ningning of China, the group is the agency’s first new band to debut in four years and its first new girl group to debut in six years, since Red Velvet made its first appearance in 2014.

Each member is connected to its own avatar in a fictional space — ae-Karina, ae-Giselle, ae-Winter and ae-Ningning. The agency explained that the name is short for “Avatar X Experience,” to evoke a theme of "meeting a new ego of oneself to experience a new world."

Ahead of the debut, Korean member Karina said, "I can feel the pressure, but the feelings of wanting to show the world a good song and a good performance are even stronger.”

“It feels so new and strange,” Japanese member Giselle added. “The fact that so many people are showing interest in us makes me want to work harder. I want to keep showing how I can change.”

The rookie girl group will stage its debut performance featuring augmented reality (AR) technology on Nov. 19 at 6 p.m., which will be uploaded on its YouTube channel.