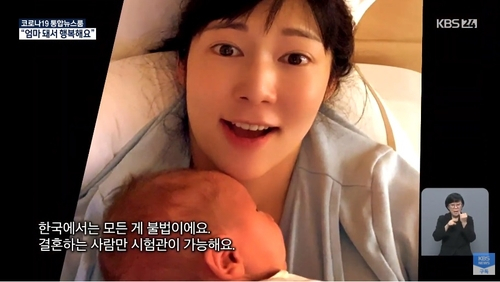 
Sayuri Fujita, a Japanese entertainer based in Korea, revealed she recently gave birth to a son.

“On Nov. 4, 2020, I became a mother to my son,” Fujita wrote on her Instagram on Monday night. “Becoming a single mother was not an easy decision, but it is also not a shameful decision. I want to thank my son for making me a proud mother.”

In an interview with KBS also aired Monday, Fujita said she had used a sperm donor in Japan to become pregnant.

“I had to use donated sperm in Japan because in Korea, only married people are allowed to do in vitro fertilization [IVF],” she said.

"The doctor said that natural pregnancy would be difficult for me and the chances of becoming pregnant through IVF would be low as well.”

Fujita said she considered getting married in a bid to have a child but decided against that route.

“I didn't want to marry someone I didn’t love. Therefore, I decided to become a mother without getting married."

Fujita, who started her broadcast career in Korea through KBS entertainment program "Beauty's Chatting" in 2007, has appeared in various entertainment programs including MBC’s "Appetizing Trips with Sayuri Fujita" (2013)  and MBC’s "Real Man" (2015).  She is currently active on her own YouTube channel “Sayuri TV” which was launched in October last year.

No marriage, no child (KOR)