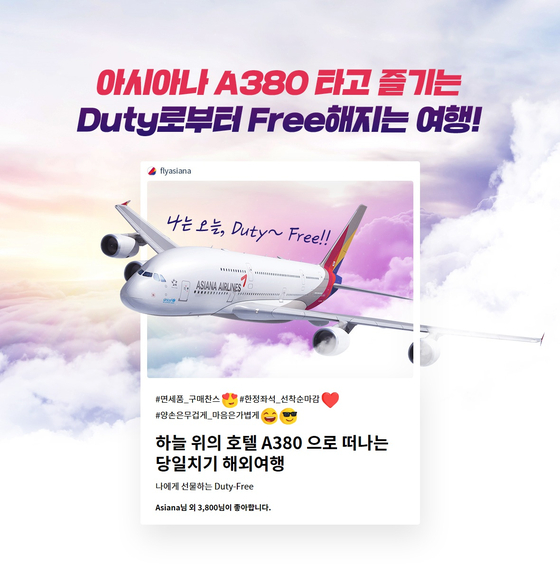 A poster promoting an Asiana Airlines international flight that flies over Japan without landing. The service starts on Dec. 12. [ASIANA AIRLINES]


Airlines are flying passengers to Japan and back, without landing at the destination country, to save their balance sheets and give a helping hand to struggling duty-free stores.


Flights to nowhere have been offered since last September, when Air Busan took passengers up and around without crossing international borders. Last month, Finance Minister Hong Nam-ki said that the carriers can now fly to foreign countries without touching down.

Even though the flights do not land overseas, passengers still have to carry a passport, and are able to purchase duty-free items. But in-flight meals are not provided amid concerns for the pandemic.

On Tuesday, Asiana Airlines announced it will operate flights to Kyushu starting on Dec. 12. The flight, which runs 2 hours and 50 minutes, takes off from Incheon International Airport at 1 p.m. and flies over Busan, Miyazak and Jeju Island before returning to Incheon.

Asiana Airlines, which is in the process of being acquired by Korean Air Lines, plans to offer flights of this kind through early January. The exact number of flights hasn’t yet been decided.

In October, the carrier offered seven flights within Korean airspace. Most of them were full, according to Asiana Airlines.

It will fly to Fukuoka. Seven flights will be operated through early January.

It will take off from Incheon International Airport at 11 a.m. and fly for around two hours.

Korean Air Lines is being cautious about rolling out a similar service amid the resurgence of Covid-19. It is reviewing the plan, according to the airline.

Duty-free operators are hoping to benefit.

Passengers on those flights can buy duty-free goods from online duty-free malls or city duty-free shops. The tax exemption limit is the same, $600 per traveler.

Hyundai Department Store Duty Free announced it is offering up to 70 percent discounts on luxury fashion brands, including Max Mara and Salvatore Ferragamo.

“The international flights without landing are seen helping the duty-free stores breathe, but no large-scale benefit is expected,” said Park Seok-in, a spokesperson for Lotte Duty Free. “Sales by domestic travelers is not that high.”

Before the Covid-19 outbreak, domestic travelers only accounted for around 20 percent of the total sales.

Travelers are returning as pandemic comes to an end