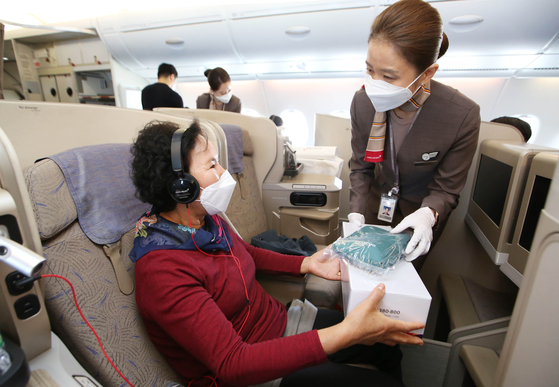 An Asiana Airlines flight attendant hands out a souvenir to a passenger who flew on Oct. 24 on the airline’s A380. [NEWS1]


Asiana Airlines on Wednesday cancelled the rest of its no-landing international flights scheduled for this month due to the resurgence of the Covid-19 outbreak.

It was among the carriers offering international flights this month that take off from Korea, fly over Japan and return. The program was aimed at reinvigorating the airline industry, which has been hit hard by Covid-19 travel restrictions.

Airlines rolled out no-landing international flights after Finance Minister Hong Nam-ki in November said that the carriers can fly to foreign countries without touching down. The flights were also expected to help struggling duty-free businesses, as the travelers were allowed to shop for duty-free products.

Asiana Airlines decided to withdraw the plan as the number of daily Covid-19 cases surpassed 1,000 in Korea, which could force social distancing restrictions to Level 3.

We “have decided to halt the operations of [the planned international] flights as a pre-emptive measure due to the spread of the Covid-19,” the carrier said in a statement Wednesday. We “will review the reoperation depending on how the situation develops.”

The airline’s first and only no-landing international flight flew to Japan on Dec. 12. It was around 35 percent occupied with 169 passengers.

Budget carrier Air Seoul, a subsidiary of Asiana Airlines, withdrew its plan to operate no-landing international flights on Dec. 11, two days after it announced the plan.

“We’ve canceled the flights due to the resurgence of Covid-19, but we still have one planned flight on Jan. 1 remaining,” said Park Bo-kyung, a spokesperson for Air Seoul, adding that the Jan. 1 flight could take off depending on the situation.

“These flights are being operated for airlines to generate at least a little bit of profit," said Park. "Airlines need enough passengers to be able to cover the fixed cost, but more people seem to be feeling reluctant to go on a plane with the Level 3 social distancing being reviewed.”

Despite the struggles, other airlines are continuing with their flights.

Jeju Air, which rolled out the service on Dec. 12, on Wednesday confirmed that it will continue with its scheduled no-landing international flights. The number of passengers on the Dec. 12 flight was similar to that of the Asiana Airlines flight, according to Jeju Air.

“Raising liquidity isn’t the only reason airlines are operating the no-landing flights,” said Park Jeong-jun, a spokesperson for Jeju Air. “There are a lot of factors to be considered, like required flight hours for pilots or co-pilots.”

The flights, which will enter Japanese airspace, are also scheduled for Dec. 25 and 31 as well as Jan. 1 and 2.