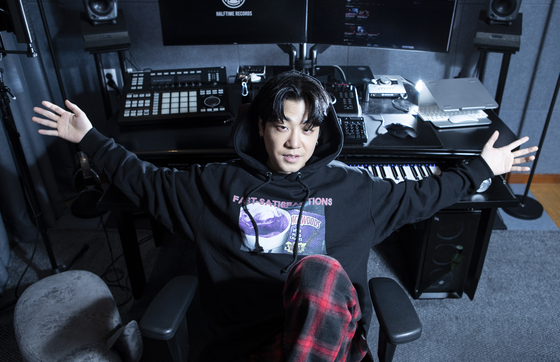 Rapper Lil Boi posing for a photo after the interview with JoongAng Ilbo at his studio in Samseong-dong, southern Seoul, on Dec. 22. [KWON HYUK-JAE]


Oh Seung-taek, better known as rapper Lil Boi, who was named the ultimate winner of Mnet’s hit hip-hop competition show “Show Me the Money 9” which ended on Dec. 18, possesses some of the most fundamental but rare qualities of a rap artist.


That is not to say that the rapper enjoyed a smooth ride: This was his second attempt at the show in its ninth season, but this time he managed to successfully show the audience that rapping can be cool even without cursing, bluffing, boasting or verbally attacking his opponents—a series of clichés that was primarily considered as a must to survive in the Korean hip-hop scene.

When the JoongAng Ilbo, an affiliate of Korea JoongAng Daily, met Lil Boi at his studio in Samseong-dong, southern Seoul, on Dec. 22, the rapper seemed to be dazed at his triumph, which may be due to the fact that as social distancing measures escalated, the rapper stood on the stage without an audience as his performances were evaluated online, and he hardly had moments to enjoy celebration, let alone a decent meal, due to an upshot of daily coronavirus cases.

“It was a shame to perform without an audience, but I think that’s why more variety in performances came about,” he said. “[If an audience was there] we had to pick out a fun song to induce responses, but we were free of that [pressure].”

The song he’d chosen in the final competition was “Credit,” which thanked the people who have been with him throughout the show over the last two months.

Lil Boi also became much more free from the depression and the social phobia that he’s been suffering with for the last five years. After debuting as part of hip-hop duo “Geeks” in 2011 with his partner Louie, the pair managed to create hit songs “Officially Missing You” (2011) and “Officially Missing You, Too” (2012) featuring Soyou from the former girl group Sistar, but confessed that fingers were pointed at him, criticizing that the music “wasn’t truly hip-hop” or that Lil Boi was only interested in making money.

“I really hated the stares we got saying that our music wasn’t pure,” he said. “When I come to think of it now, I should have been fine with it if I believed in my music, but I was overthinking it.”

According to the rapper he’s been regularly receiving professional treatment over the past two years. 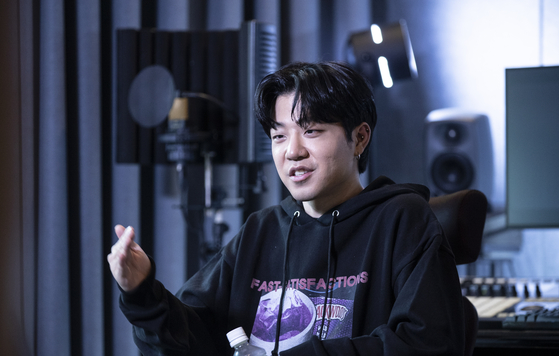 Rapper Lil Boi at the interview with JoongAng Ilbo at his studio in Samseong-dong, southern Seoul, on Dec. 22. [KWON HYUK-JAE]


“After meeting my teammates in this show, seeing how supportive and attentive they were seemed to have acted as similar to receiving counseling,” he added.

Including producers of the show such as Zion.T and Giriboy as well as his team members Wonstein, Chillin Homie and Sky Minhyuk, the rapper seemed to forge some strong ties this season.

“If before in the fourth season I was only thinking of myself and desperate to prove myself, [in this season] they really took care of me,” he said.

His chemistry with rapper Wonstein quickly went viral online, and the rapper says that he sees a lot of his younger self in him.

“I hope he retains that innocence until he dies,” Lil Boi said. “I was also able to go back to my mindset when I first started music after working with him.”

“Ultimately, I think hip-hop is about honesty,” he said. “The rappers that I like, such as J. Cole and Chance the Rapper are not provocative people. They just like to tell their own stories.” 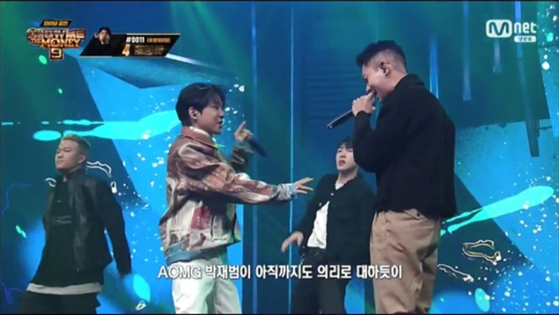 Scene from rapper Lil Boi's final round of the Mnet show ″Show Me the Money 9″ where he performed the song ″On Air″ with rappers Loco, Jay Park and Gray. [MNET]


Even his personal tastes, such as in films, reflects his musical dogma. The rapper told the press that he likes romantic comedies such as “About Time” (2013).

“I think my musical dogma is becoming similar to the warmness of the art that I like,” he said. “There’s a lot of discussions about the origin of rap — some say it’s derived from poetry, some say it’s from preachers, but at the end of the day I think it’s about persuading the listeners about the message I wanted to convey, and I try to focus on that in my music as well.”

His win might prove that even within the hip-hop genre, there lies diversity.

“I do think that the pie has grown a lot bigger, but we still have a long way to go,” the rapper contemplates. “Like how the Korean music market grew due to the popularity of idol groups, I think the hip-hop genre has more potential to expand as stars continue to come out.”

And “Show Me The Money” has worked as a bridge to assimilate hip-hop into mass culture, but also as a breaking point of the traditional dynamics of the genre.

“Before the show started, the rule was that older rappers would succeed first and help their juniors succeed as well, but now the situation is sometimes reversed,” he said. “Ideological conflicts have grown bigger now, and as a rapper born in the early '90s, our generation still maintains respect for the seniors but we also like the music that the juniors make. It may sound too grandiose, but I think as a generation somewhere in the middle of these two, it’s our job to widen that middle ground.”

Show Me the Money 9 Lilboi interview