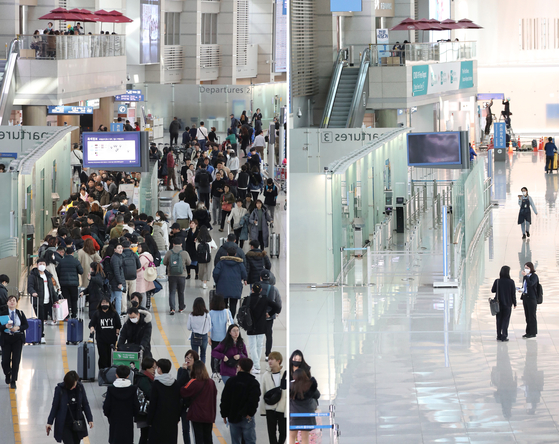 Left, people leave Korea from a departure gate at Incheon International Airport on Jan. 23, 2020, three days after health authorities confirmed the nation's first detection of the coronavirus in a visitor from Wuhan, China. Right, the same gate is nearly empty Tuesday. [YONHAP]

Tensions between the Gwangju Metropolitan Government and its nightlife businesses boiled over as dozens of clubs threatened to defy shutdown orders and reopen.

Some 100 clubs and bars that allow table-hopping and mingling in the sprawling Cheomdan-dong neighborhood were about to open doors for the first time in three weeks Monday night, but decided not to follow through as the Gwangju Metropolitan Government started sending emergency text messages to locals warning they would be slapped with a 3-million-won ($2,700) penalty if they went out and caroused.

The Gwangju branch of a group representing bars and nightlife businesses nationwide said Tuesday its members would keep their businesses closed until Jan. 31 as the Gwangju Metropolitan Government requested, but warned the city would have to come up with ways to compensate them for their losses.

Discussions between both sides have been deadlocked for days, as clubs in Gwangju stood up against the city’s closure orders. They were forced to limit their operating hours for several months last year before getting told in late December — when daily coronavirus cases peaked — they must shut down completely.

Frustrations over government restrictions are reverberating through other industries as well, even those that saw their restrictions eased this week. 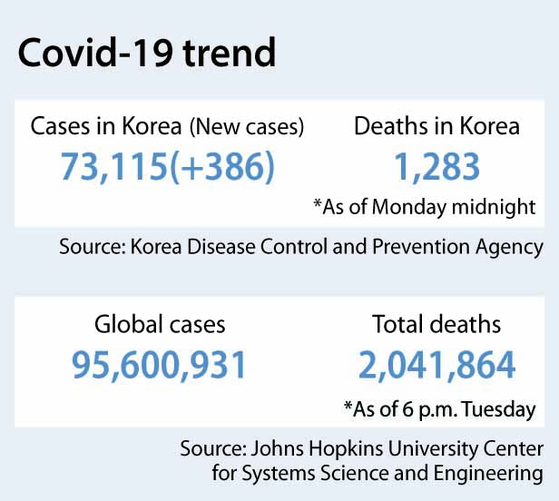 Gyms and noraebang (singing rooms) in the greater Seoul area were allowed to reopen last Monday, but were told they must close from 9 p.m. to 5 a.m., the busiest time for many. They were also told to limit customers to one for every 8 square meters (86 square feet) of space.

“It’s such a relief that I can reopen again,” said Ahn, 63, who owns a noraebang in Gwangjin District, eastern Seoul. “But I’m crushed that I can only open until 9 p.m. That’s normally when people start to come in. It’s like they can sing only one song and then they have to leave.”

A 45-year-old owner of a gym in Seoul who asked to speak on the condition of anonymity said he was afraid he might have to turn some customers away if they come during the evening peak hours.

“People who have jobs usually come between 8 p.m. and 11 p.m.,” the gym owner said. “Since we’re forced to close at 9 p.m., people will now swarm in at 8 p.m., which means some could be forced to go back home without doing any exercise.”

Korea added 386 new coronavirus cases Monday, the second day in a row that daily infections were below 400, according to data from the Korea Disease Control and Prevention Agency (KDCA).

There were 128 cases in Gyeonggi, 95 in Seoul, 18 in Incheon, 17 in Busan, 16 in Gangwon, 15 in Daegu, 11 in South Gyeongsang, eight in North Gyeongsang, seven each in Gwangju, Daejeon, South Chungcheong, six in South Jeolla, five each in Ulsan and North Chungcheong, three in Sejong City, two in North Jeolla and one on Jeju Island.

The remaining 35 cases were imported — 16 from the United States, three each from Indonesia, Pakistan and Sri Lanka and one each in Myanmar, Russia, Iraq, Britain, France, Germany, Brazil, Ghana, Senegal and Zambia.

Nineteen patients died, bringing total deaths to 1,283, while 745 patients recovered, raising total recoveries to 59,468. As of Monday at midnight, Korea had counted 73,115 coronavirus patients in all.