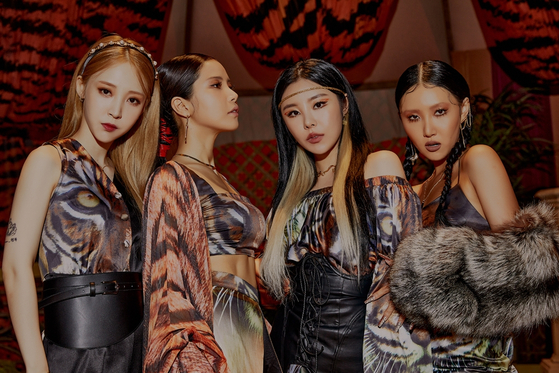 
Solar and Moonbyul of girl group Mamamoo have renewed their contracts while Hwasa and Wheein are in "positive talks," according to the group's agency RBW on Friday.

"We are discussing the renewal of their contracts in a positive light, based on the trust that we have built with each other," the agency said. "The contract still has some time left, but we began our talks early in order to allow the members, who have believed in us and have been with us a long time, to think long and deep about this."

"We have decided to go public about this matter to stop assumptions and rumors."

According to RBW, Solar and Moonbyul decided to go ahead with renewing their contracts and the other two members are also showing a positive reaction.

"We hope to see a good outcome, due to the members' affection and pride in Mamamoo."

Mamamoo debuted as a four-member group in 2014 with "Mr. Ambiguous" and have released hit after hit ever since.

All four members have had their solo work listed on Billboard's World Digital Song Sales chart, a rare feat for a group.

[CELEB] It's only taken nine years, but Mamamoo finally has a subunit