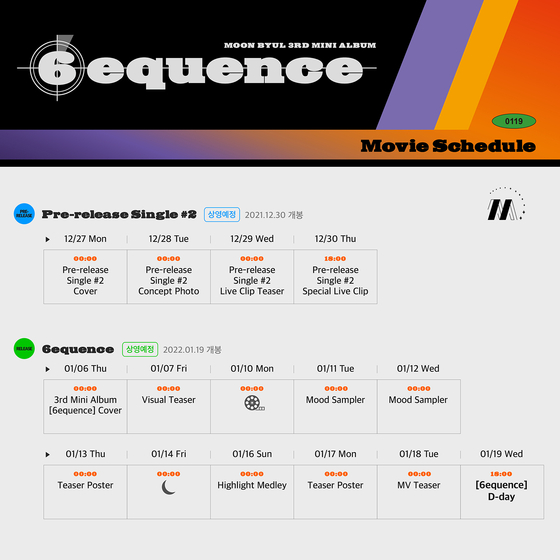 A detailed schedule of Moonbyul's tracks and teasers was unveiled Thursday, ahead of the artist's upcoming solo EP “6equence” which will drop on Jan. 19. [RBW]


Moonbyul of girl group Mamamoo will drop her upcoming solo EP “6equence” at 6 p.m. on Jan. 19, according to her agency RBW Thursday.

The agency also said that the singer will unveil a track on the album featuring singer songwriter Seori, at 6 p.m. on Dec. 30. The title of the song has not yet been announced.

Another track from this album titled “G999” featuring rapper Mirani was released on Dec. 13.

The title of her lead track has not been revealed yet.

A detailed schedule of the tracks and teasers to “6equence” was unveiled on RBW’s official social media accounts.

Moonbyul’s new solo album comes one year and 11 months after her last EP titled “Dark Side of the Moon.”

Moonbyul is a one of the four members of girl group Mamamoo which debuted in 2014. The group has won various awards since then, including Best Album at the 2021 Golden Disk Awards and Best Vocal Performance Group at the 2020 Mnet Asian Music Awards.

She made her solo debut in 2018 with a three-track album titled “SELFISH.”