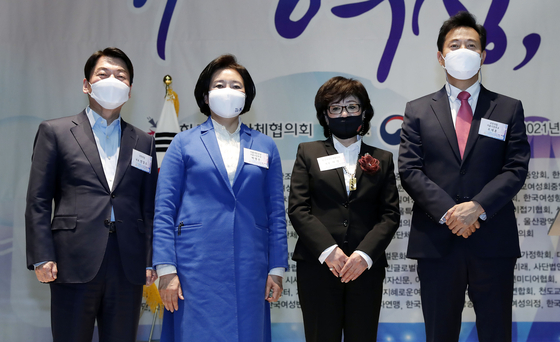 
Two opposition parties started negotiations Monday on backing a single candidate for the Seoul mayoral by-election in an effort to unite conservative votes.

Oh Se-hoon of the People Power Party (PPP) and Ahn Cheol-soo of the People’s Party are both running in the Seoul mayoral by-election on April 7. If they manage to strike a deal, one will drop out and the other will face off against Park Young-sun of the ruling Democratic Party (DP).

According to the PPP, Oh selected several politicians including former Rep. Kwon Teag-ky as his negotiators. From Ahn’s campaign, some close associates as well as Rep. Lee Tae-kyu, secretary-general of the People’s Party, will participate in the negotiation.

Kwon and Lee were once allies. In 2006, they were both on the presidential election campaign of Lee Myung-bak, known as the Anguk Forum. At the time, Kwon was in charge of managing Lee’s schedules, and Lee was the head of the strategy and planning team.

Kwon was elected to the National Assembly in 2018. In the Lee administration, he served as vice minister of special affairs. 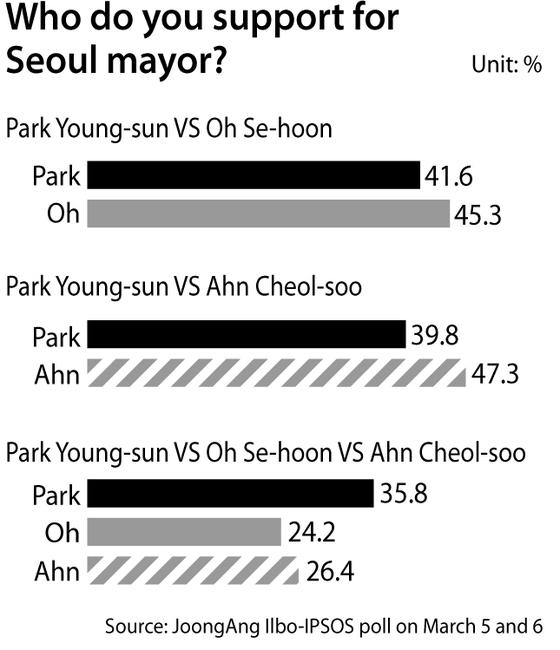 Rep. Lee briefly worked in the Lee Blue House in 2008 as a speech writer. In 2012, he joined Ahn’s failed presidential campaign. He is one of Ahn's closest associates .

An agreement is expected as the opposition parties are destined to lose unless they field a unified candidate.

In a JoongAng Ilbo opinion poll, a unified candidate – whether it is Ahn or Oh – defeated Park in a two-way race. If the opposition fails to get behind one candidate, Park would win a three-way race, the poll showed.

If Ahn and Oh fail to consolidate their candidacies and both run, Park would win the race with 35.8 percent. Ahn came second with 26.4 percent and Oh 24.2 percent, the poll said.

The public was skeptical about an opposition agreement, the poll showed. Asked about the possibility of an opposition candidate consolidation, 37.7 percent said Ahn and Oh will be able to strike a deal, while 47.1 percent said they will not.

The poll had a confidence level of 95 percent and margin of error was plus or minus 3.1 percentage points.

Ahn and Oh appeared determined to merge their candidacies. They had a meeting on Sunday night, aides said, and had a few beers.

“We don’t have much time,” Ahn said Monday morning. “We agreed that we will take the initiative if the parties’ negotiations won’t move forward.”

The DP’s candidate Park is also facing a negotiation to consolidate her candidacy with that of the minority opposition Open Minjoo Party candidate, Kim Jin-ae. Kim, who quit her lawmaker seat last week, is demanding debates and a primary election, but the DP is reluctant to accept her demands.

Park, a former four-term lawmaker and a startup minister for the Moon Jae-in administration, is operating a massive election campaign. Former Foreign Minister Kang Kyung-wha joined her campaign, becoming the fourth former cabinet member of the Moon government to do so.

Meanwhile, Park issued Monday an apology to the former secretary who said she was sexually harassed by the late Seoul Mayor Park Won-soon.

“I am once again offering my heartfelt apology to her,” Park said. “I will do my best to restore her life.”

In 2006, the PPP’s Oh was elected Seoul mayor and was re-elected in 2010. He stepped down in August 2011 after losing a referendum on a plan to offer free school lunches to only 30 percent of Seoul's students, not all. Park Won-soon won a mayoral by-election in October 2011. He was reelected in 2014 and 2018, but committed suicide last July after his former secretary made a complaint against him for sexual molestation.