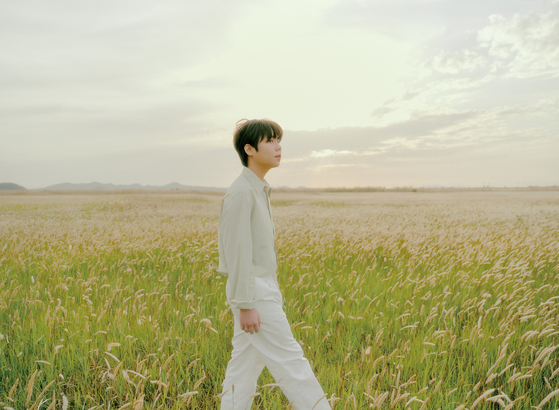 
Jung Seung-hwan is back. On Wednesday, the singer released his first physical album in two years — an EP titled “Five Words Left Unsaid.”

“I felt like I waited so long for a new release, so I can’t imagine how my fans must have felt,” said Jung during a press interview on Monday. “I want to say sorry to my fans and thank you [for waiting].”

The lead track “We, From The First” is a heart-wrenching ballad about a man who develops romantic feelings for a close friend, but is unable to express himself and quietly suffers alone. Jung says the lead track of this EP remained undecided, let alone finished, until the last moment.

“‘We, From The First’ was such a tricky track,” he said. “My team and I changed its melody and lyrics so many times. It was initially supposed to be a break-up song, but I felt like the melody and lyrics didn’t go together as I sang it. To me, the melody sounded more like a serenade, so we switched the theme to unrequited love.”

“The moment I heard the completed version, I knew this had to be the lead track. I know I’m being abstract, but I felt a sort of energy from this song, which is why I chose it as the lead.” 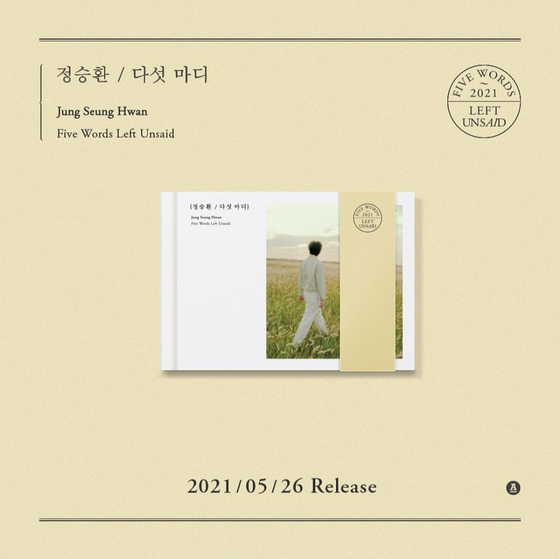 
Although he delivers the song with his signature suave and captivating voice, Jung confessed that “We, From The First” is not based on any personal experiences. In fact, he says he's unable to even relate to the lyrics of the song.

“I’m a bit hesitant to say this because it might ruin it for the listeners, but I’m not the type of person to quietly have a crush on someone and suffer alone for so long like the lyrics,” he said. “In all honesty, I had a difficult time relating to the lyrics of this track.”

In order to sing it in a convincing way, Jung said he resorted to watching romantic movies and television series for inspiration.

“I watched actor Ryu Jun-yeol’s romance scenes in the series ‘Reply 1988’ over and over again, trying to feel some emotions,” said Jung.

Jung plays the lovesick protagonist in the music video for the lead track “We, From The First” on his new EP. [SCREEN CAPTURE]


Perhaps thanks to the binge-watching, Jung managed to play the role of the lovesick protagonist himself in the music video for “We, From The First.”

“I lacked confidence [in acting] at first, and this music video required the most acting skills from me than any other video so far,” the singer said. “But other professional actors who costarred with me helped me on set, and I also think my acting has improved a lot over the years. In the end, I did an amazing job getting into the character of a shy, smitten guy.”

Whether it comes to singing or acting, the singer says he is not afraid of some melodrama.

“Usually, my personal preference is to sing a bit dryly to emphasize the sorrowful melody itself,” he said, “but some songs are just meant to be corny.”

“Some people think being corny makes a song bad, but it shuts down so many possibilities if I struggle to avoid being corny,” he continued. “So I don’t purposely try to avoid cheesiness. In fact, when I analyze the nature of a song and it seems necessary, I get unapologetically cheesy. If you sing it like you mean it, it’s okay to be as emotional as you want.” 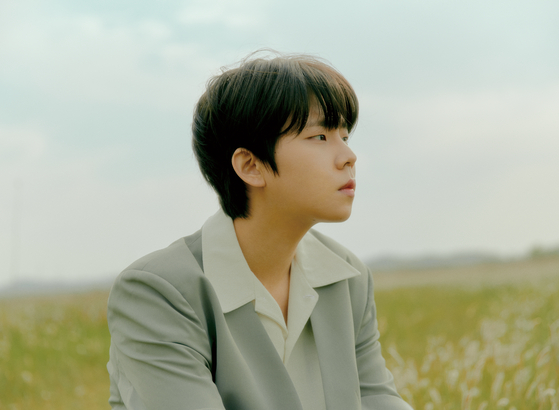 
Jung is also well aware of the characteristics of the ballad genre.

“It's very easy for this genre to become clichéd,” he said. “The usable chords are so limited that they’ve become almost formulaic. There’s a limit to creating new melodies using those chords, and most of them have already been done by someone else. Creating a good ballad within those limits is a matter of truly small twists in details, which is what makes all the difference.”

“That’s why I respect [veteran ballad singer] Sung Si-kyung; he has never repeated himself throughout his long career, yet has released countless hit ballad songs. Sometimes I jokingly complain to him that he has already done anything new I try to do.”

Jung also mentioned Sung’s new song “I Love U” released last week: A pop dance track that the 42-year-old singer has challenged himself with.

“I respect Sung for constantly challenging himself with new fields,” he said. “When I saw Sung dancing in his music video, I thought that might be me in 10 or 20 years. Nobody knows, so I’m going to stay open to everything.” 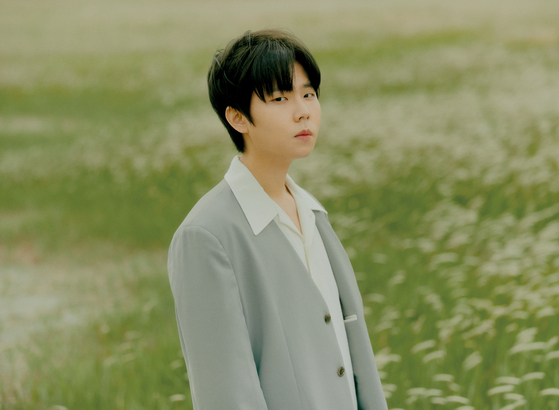 
Ballads are conventionally associated with the fall and winter seasons in the K-pop industry, but Jung decided to release his EP in late spring.

“It’s true that ballad tracks see more success in the winter,” said Jung. “But ballad fans listen to the genre no matter which season. Plus, this time my lead track is about young love, and what seasons better represent youth than flowery spring and summer? So I believe this EP is fit for this season.”

"I also think that I’m at the spring of my life right now, since I’m only 26 years old [in Korean age],” he added.


Although he may be relatively young, the singer has plenty of experience in the music business. Jung and his vocals first rose to fame when he appeared on the fourth season of SBS’s hit audition program “Kpop Star” (2014-2015). He made his official debut as a singer in 2016, and having started his career at such a young age, has had ample time to interact with and learn from veteran musicians.

“Some of them [musicians] have been in the industry for longer than I’ve been alive” Jung said. “They teach me things I’ve never known or thought about, broadening my perspective, especially at my current agency Antenna Music [run by veteran singer-songwriter You Hee-yeol].”

“Now that I know the process of getting a song out to the world, I learned that music can never be made by one person. It’s a team effort,” he continued. “The experience has humbled me, and within my team I try to do my best in my first and foremost role as a vocalist. But I’m also trying to broaden my musical spectrum, working on lyrics and songwriting.”

“She actually first performed a demo of ‘Love Letter’ on the KBS show 'You Heeyeol's Sketchbook,' and I uploaded a cover version on social media for fun,” said Jung. “Then IU reached out to me and asked, ‘Would you like to take this song?’ I was simply so grateful. I had never imagined it would become my song.” 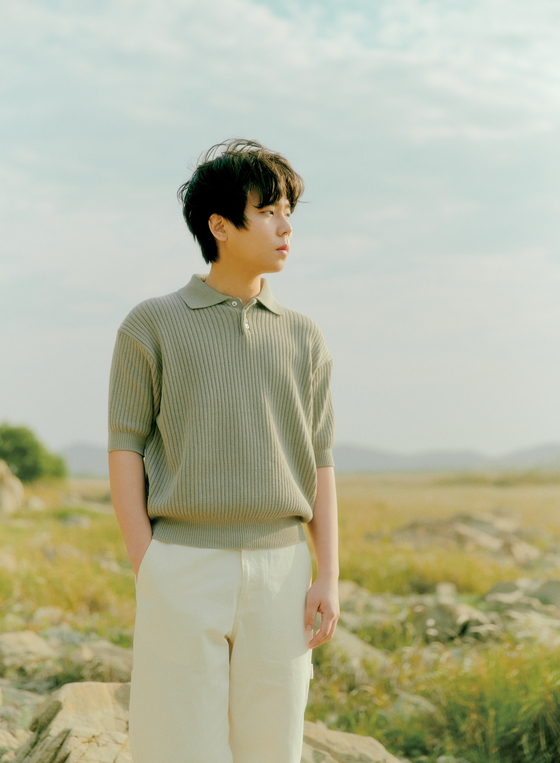 
Jung wrapped up the interview by suggesting some main points to pay attention to while listening to the EP.

“The album’s title is ‘Five Words Left Unsaid’ not only because it features five tracks, but also because of a deeper meaning,” he said. “For me, each song is inspired by something that was left unsaid in certain situations; words that couldn’t be said for whatever reason. Those words were then expanded into a full song, and this EP consists of those five songs.”

“The lyrics [of this EP’s tracks] are very universal stories. So if you come across a track that matches your experience or current situation, feel free to get into your feelings. I hope my songs stay on people’s playlists for a long time.”

The singer has been dubbed the “seson of ballads” since his 2014 appearance on “Kpop Star”; seson was the Joseon Dynasty (1392-1910) title for the eldest son of the crown prince, a joke about how young and promising of an artist Jung is, on his way to become the next prince of ballads.

“The nickname sometimes makes me blush, but I’m honored because it’s not a title given to everyone. I hope this EP becomes my stepping stone to become the prince.”