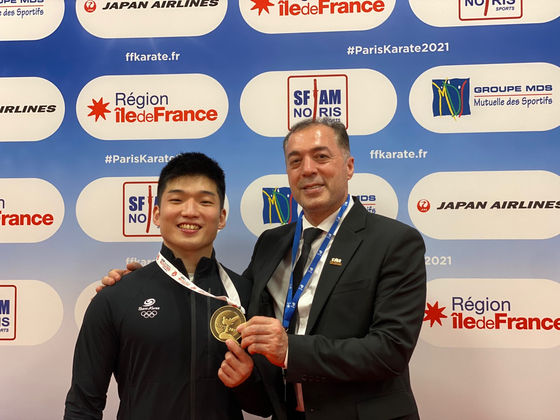 Park Hee-jun holds his bronze medal with his coach Ahmad Safi, after finishing third in the men's Kata at the 2020 Olympic Qualification Tournament in Paris on Saturday. [Korea Karate Federation]


Park Hee-jun won the bronze medal for men's Kata at the 2020 Olympic Qualification Tournament in Paris and qualified for the Tokyo Games on Saturday.

Park is the only of Korea's six national Karate team members to earn a berth at the Olympics, coming in first in all three preliminary rounds in the men's kata qualifiers to advance to the final medal round.

Kata is a demonstration of offensive and defensive martial arts movements, meaning 'forms' in Japanese.

For the medal event, four Karateka compete in a round robin, playing three matches each against each other.

Points are weighted with 70 percent based on technical performance and 30 percent on athletic performance.

Practitioners have to perform a different Kata in each round, so need to strategically decide which Kata to perform against which opponent. For example, Karateka may choose not to perform their best Kata against a stronger opponent, saving it for later in the tournament instead. As the choices of Kata for each round are crucial, they are not revealed until the game starts. 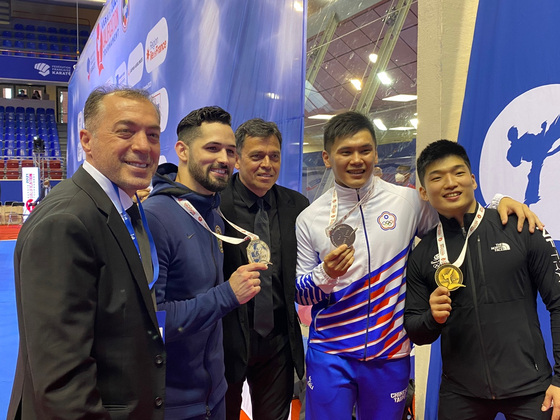 
In his first Kata in the finals, Park chose the Anan dai style against Yi Ta Wang of Taiwan, but lost with 24.98 points against Wang's 25.

Park chose Ohan dai second, beating Shahrjerdi Abolfazl of Iran with 25.98 to 25.26 and jumped up to second place.

His third Kata choice was a Papuren against Torres Gutierrez Ariel of the United States. That resulted in a loss as he earned 25.32 points to the American's 26.26, putting Park in third place for a bronze medal and an Olympic berth.