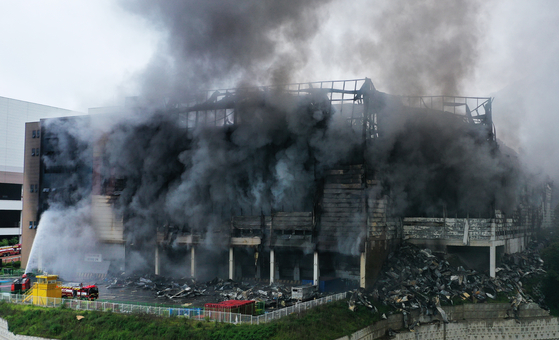 Coupang’s Deokpyeong Logistics Center in Icheon, Gyeonggi, continues to burn on Friday. The fire, which broke out Thursday morning, continued through Friday and could take days to fully extinguish. [YONHAP]


A fire at a Coupang logistics center continued to burn Friday more than 30 hours after starting, with some protesters claiming that the massive warehouse was an accident waiting to happen.

The fire was so hot that steel beams bent, glass shattered and the exterior melted. As thick black smoke poured from the nearly gutted structure Friday, officials warned that the warehouse was in danger of collapse and the battle was far from over.

“In my personal opinion, it could take more than two days to extinguish the blaze,” Park Soo-jong, a fire department spokesman, said.

During a briefing Friday afternoon, the Icheon fire department said that there were no casualties, though one firefighter remains unreachable inside the Deokpyeong Logistics Center, a four-storied, 127,178-square meter building in Icheon, Gyeonggi.

Rescue operations for the 52-year-old firefighter were suspended due to concerns that the building could come down at any moment.

The fire appears to have been ignited by a spark from a power outlet in the basement of the facility, according to the authorities.

Responding firefighters brought the blaze under control three hours after it started on Thursday. Five of the firefighters entered the basement of the building at 11:50 a.m. to search for people who may have been trapped inside.

As flames started to rise again, they retreated, but one failed to make it out. One of the firefighters that escaped was treated at the hospital for smoke inhalation.

Protesters descended on the e-commerce company’s headquarters in Songpa District, southern Seoul, Friday making a wide range of claims about the facility, though some of the information was gleaned from social media.

They said that dust was everywhere in the building, sprinklers were shut off to prevent accidental activation and cell phones were prohibited by the company, due to the danger of using them around forklifts.

"Activation of sprinklers was delayed because they were shut off due to frequent malfunction," according to a statement issued by a transportation union under the Korean Confederation of Trade Unions. "According to a post on social media, there was an employee that sensed fire 10 minutes earlier than the earliest report but was not able to report the fire because the employee did not have a cellphone."

Coupang opened the logistic center in 2016, purchasing it for 140 billion won ($125 million), according to a local media outlet. It was used to service customers in southeastern Seoul, Gyeonggi and Chungcheong Province.

Local press reports say that the facility was used for non-perishable goods and was Coupang’s largest warehouse, though the company could not confirm that.

"We are deeply sorry for causing concern to many people over the fire at the Deokpyeong Logistics Center," Kang Han-seung, Coupang Corp. representative director, said in a statement on Friday. "We are very sorry about the firefighter who has not yet been rescued. We will actively cooperate with the authorities on the reason behind the fire outbreak and resolving the accident."

Coupang said that 248 people were successfully evacuated from the facility.

Coupang listed on the New York Stock Exchange in March has been facing significant challenges since going public.

Its shares dropped precipitously after briefly touching a high of $69.00.

It reported a massive first-quarter loss and it has been caught up in a price war with highly motivated competitors. The company has also been the subject of repeated complaints about working conditions.

Coupang shares rose 2.74 percent in New York Thursday to close at $39.73, with investors shrugging off early reports of the fire.