Films give interesting insight into our futures online

Films give interesting insight into our futures online 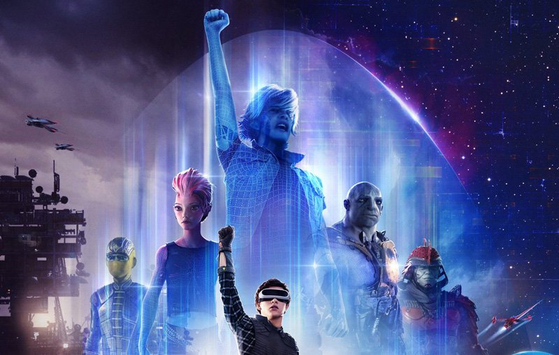 Steven Spielberg's 2018 action flick ″Ready Player One″ is most widely used as an example of the metaverse, where a whole new world unfolds in a virtual space dubbed the Oasis. [WARNER BROS. KOREA]


Everyone’s talking about metaverse — but what actually is it, and what will life be like for people when it becomes widely accepted?

Metaverse is a compound of the prefix "meta" and universe, and it describes a space where avatars will allow users to act out social, economic and cultural actions. It sounds futuristic and vague, but technically speaking, we’ve been experiencing small metaverses for a long time. Within online video games, users roam around a digital world and battle with monsters or with each other, while on social media services, users chat with each other behind avatar personas. What the metaverse offers is a collection of all these acts, and these actions having tangible results in the real world.

There are a number of apps and computer programs that are taken as examples of metaverse services. Naver Z’s Zepeto, Roblox, Minecraft and Sandbox are the most representative. Among these programs, Zepeto is the only one that didn’t start out as a game, but an augmented reality (AR) avatar app. Others are games that allow users to build their own mini games and invite others to play along to their own rules. In a sense, games are a small metaverse in their own right and also the reason why metaverse is mostly depicted in a game-like manner.

To make it easier for people to understand the concept of metaverse, experts use the example of popular films to help understand what it will be like when it is widely adopted and a new digital society is built. The most iconic is Steven Spielberg’s 2018 blockbuster action flick “Ready Player One.”

In ″Ready Player One,″ users can log on to the Oasis with their own avatars and try the things they couldn’t in the real life ? racing down the highway at full speed, dancing mid-air at an anti-gravitational disco or taking part in an inter-galactic war. [WARNER BROS. KOREA] 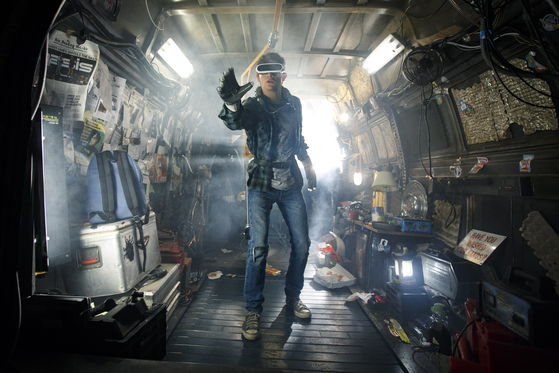 In ″Ready Player One,″ users can use mechanical devises such as headgear to log on to the Oasis. [WARNER BROS. KOREA]


In “Ready Player One,” a film based on the novel of the same time by Ernest Cline, a whole new world unfolds in a virtual space dubbed the Oasis. Set in 2045, the real world has gotten worse for everyone — the gap between the rich and the poor has widened and living conditions for the lower class are as bad as they could be. Oasis on the other hand allows users to live the lives they want to through their avatars and try the things they can’t in real life — racing down the highway at full speed, dancing mid-air at an anti-gravitational disco or taking part in an inter-galactic war with cutting-edge robot technology.

People frequent Oasis mostly for entertainment purposes, but when its creator James Halliday announces that the player who finds a hidden Easter Egg will get full ownership of Oasis, things get rough. The film’s protagonist Wade Watts wins the challenges with flying colors, becoming the target of a powerful conglomerate named IOI. When at last Wade finds the hidden egg and is endowed with the ownership of the Oasis, he decides to close the service every Tuesday and Thursday so that people spend more time in the real world.

In 2009 R-rated action movie ″Gamer,″ users of the game Slayers use death-row prisoners as characters to first-person shooting game. The prisoners are promised freedom if they survive 30 games. [CINERGY] 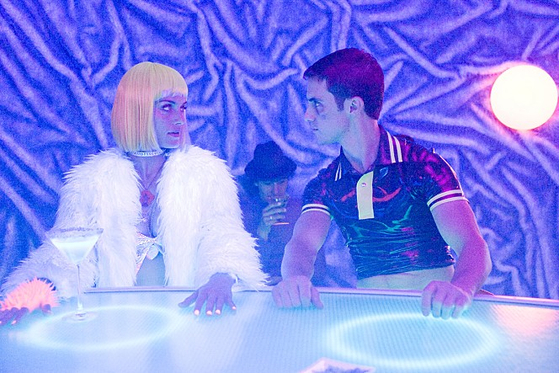 In 2009 R-rated action movie ″Gamer,″ users of the game Society can make real people follow their command as their avatars and connect with other characters, also behind which are other users controlling the human actors. [CINERGY]


Similarly in the R-rated movie “Gamer” (2009), the protagonist’s ultimate goal is to escape the metaverse and return to their real lives. In a near-future society, people log on to virtual games in their homes using sensors that connect their brain to the “characters” and make them follow their command. Perhaps a disturbing concept, the characters are actually real people. The two most popular games are first-person shooting game Slayers and social connecting game Society. In Slayers, the players are death-row prisoners who are promised freedom if they survive through 30 matches while the “actors” in the Society are paid for their labor.

Korea had an early example of a metaverse concept. Though the film is ridiculed as one of the lowest-rated movies of the 2000s with a rating of 4 out of 10 on Naver, the “Resurrection of the Little Match Girl” (2002) ventured into the idea of connecting with a virtual world and playing a game with all bodily senses — not just with a keyboard and mouse.

The reason that many movies use the idea of games to show the metaverse is in fact because metaverse was conceived within games, according to Choi Sam-ha, a professor of game design and marketing at Sogang University. People have already used avatars to act according to their will and even make real money off of their actions in games. What the metaverse offers is a muti-sensory experience that allows people to see and feel the world in 360 degrees, not just in the flat rectangular screen on digital devices.

"It may seem like games have the upper hand with metaverse, but that's not really the case," said Choi. "The idea of connectivity between people is crucial in the Fourth Industrial Revolution so it's likely that social media services, which have the know-how and data of running a network-based service, will soon take the lead. Metaverse may have started out with games, but it will soon expand into other, maybe all, aspects of life." 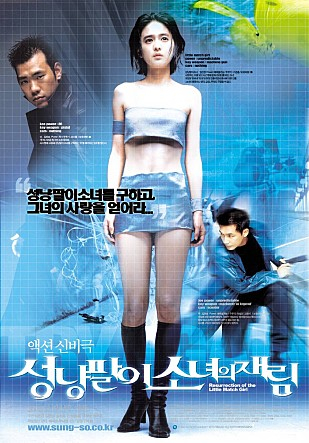 The “Resurrection of the Little Match Girl” (2002) ventured early into the idea of connecting into a virtual world. [CJ ENTERTAINMENT]

U.S. non-profit organization Acceleration Studies Foundation (ASF) first defined the metaverse as “a future broadly reshaped by virtual and 3-d technologies” in 2007, based on cyberpunk science fiction novel “Snow Crash” (1992) by Neal Stephenson in which an immersive 3-d virtual world shared by people around the world was envisioned.

“There is no single, unified entity called the Metaverse,” explained ASF in a report titled “Metaverse Roadmap Overview.” “The Metaverse is the convergence of virtually-enhanced physical reality and physically persistent virtual space. It is a fusion of both, while allowing users to experience it as either [...] We suggest thinking of the Metaverse not as virtual space but as the junction or nexus of our physical and virtual worlds.”

The idea of the metaverse being connected to the real world is best shown in Japanese animated film “Summer Wars” (2009). In a near-future Japan, people gather at virtually-real world OZ for entertainment, but all the real-life bureaucracy also takes place in the online world. So when an artificial intelligence program called Love Machine hacks into OZ’s system, hell is set loose on Japan: Traffic lights stay red for hours while some junctions have lights from all directions lit in green; online chatting becomes impossible; electrical devices become unusable; and in the end, Love Machine even plans to launch submarine missiles on Japan.

“Summer Wars” revolves around the brain-war between Kenji and Love Machine, but the way that the society functions within the film provides the best depiction of how a metaverse-run world would look like by showing what havoc will take place if the system is attacked.

To think simply, the word metaverse will replace the word internet — people will use the metaverse to look for information, to connect with other people, to have fun or just to kill time. And when all that is made impossible, the real world also falls apart. But just like there are multiple internet engines like Chrome and Firefox, there will be a number of metaverse platforms to choose from, says Kim Sang-kyun, professor of industrial engineering at Kangwon National University. Kim published his book “Metaverse” in December last year. 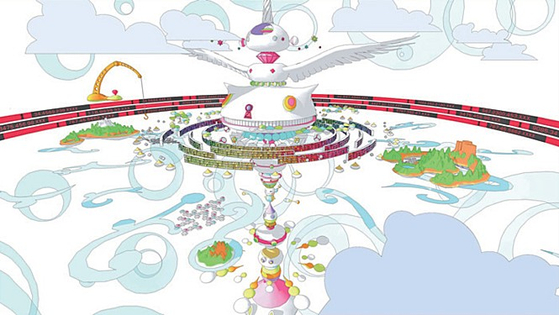 Japanese animated film “Summer Wars” (2009) shows the idea of the metaverse, which is called OZ in the film, being connected to the real world and causing chaos when the system is hacked by an artificial intelligence program. [CJ ENTERTAINMENT]


“People use KakaoTalk and Facebook Messenger, and also own accounts on various social media services,” said Kim. “The metaverse services will be just like that. There will be a lot of them at first, but at the end, only a handful will be left and people will gather there. But it’s unlikely that there will be just one particular service like there are in the movies.”

Many people think of metaverse being similar to games and existing for the purpose of entertainment, but it won’t be for fun that people start depending on the metaverse as a meaningful platform, says Kim.

“Education and labor are two of the most important elements of people’s lives,” he said. “Those two things will soon take place in the metaverse and when they do, then that’s where the true potential of the metaverse will fully bloom. The metaverse won’t fully replace people’s lives in the offline world, but people will definitely log on to converse with each other as they do with chat apps these days and also enjoy the many other services that will be offered.”