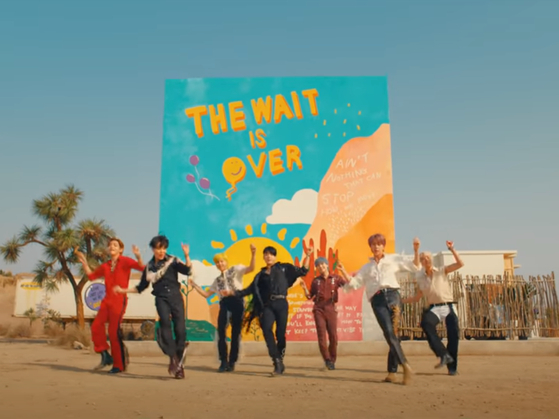 A scene from the music video for BTS's new song ″Permission to Dance.″ [YOUTUBE CAPTURE]


K-pop superstar band BTS’s new song "Permission to Dance" debuted at the No. 2 spot on Spotify's Global Top 200 chart, according to the music streaming service giant on Sunday.

“Permission to Dance” is the second track on BTS’s EP “Butter,” the physical CD of which was released on Friday afternoon.

The EP’s first and main track "Butter" has been a huge hit since it was released in May, topping the Billboard’s Hot 100 singles chart for six straight weeks as of Friday. The EP “Butter,” which consists of the two songs and their instrumental versions, is the Korean boy band’s first-ever album with entirely English lyrics.

According to Spotify, “Permission to Dance” was streamed 7,339,385 times on the day of its release Friday. The official music video for the song also surpassed the 100 million threshold on Sunday afternoon.

For “Permission to Dance,” BTS collaborated with Ed Sheeran.

It is not the first time for the band to work with the British singer-songwriter. The two already collaborated on "Make It Right," a track on BTS's fourth full-length album "Map of the Soul: 7" (2020). “Permission to Dance” was also co-written by high-profile producers such as Steve Mac, Johnny McDaid and Jenna Andrews.

The cheerful dance pop track “carries the message that everyone can dance freely even if they have had a hard day," BTS member Jimin said in an online talk show, titled "A Butterful Getaway with BTS," which aired via the Korean streaming service Naver Now on Friday.

The music video for the song shows BTS members dancing together interspersed with clips of people from all walks of life dancing while wearing masks, which suggest the message that we should seize the day even amid the Covid-19 pandemic.

The video also shows purple balloons that float up to the sky. The color purple symbolizes BTS and its global fan base, known as “ARMY.”

The band’s agency Big Hit Music said that the choreography for the song includes international sign language for words like "fun," "dance" and "peace."

BTS will appear on the American talk show "The Tonight Show Starring Jimmy Fallon" on Tuesday and Wednesday to perform “Permission to Dance” and “Butter” respectively.