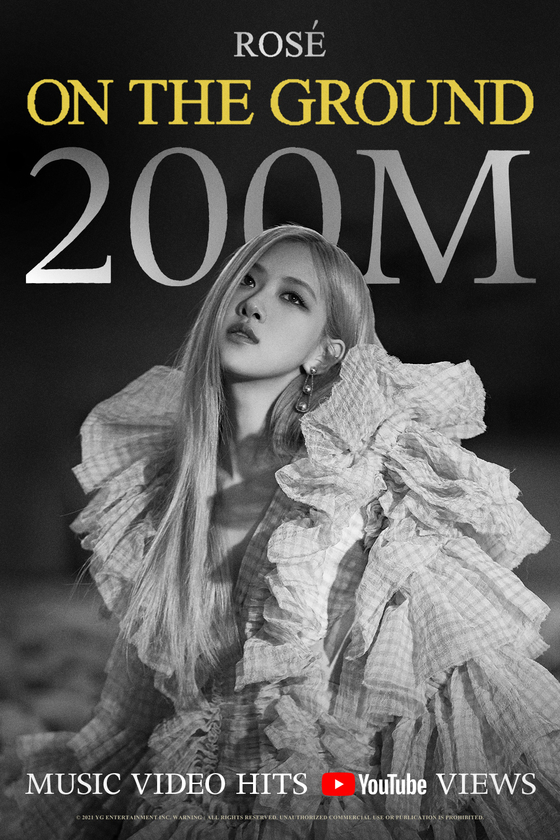 The music video for Rose's solo single ″On The Ground″ has hit 200 million views. [YG ENTERTAINMENT]


The music video for “On The Ground,” the solo debut single by girl group Blackpink’s Rosé, reached 200 million views on Youtube on Tuesday. It has been 123 days since its release.

The song hit 100 million views just a week after it was released on March 12, the fastest time for a Korean female solo artist to reach threshold. It topped the iTunes Top Songs charts in 51 countries, and both the Billboard Global 200 and Billboard Global Excl. U.S. charts.

With this record, Rosé officially set two Guinness World Records — first artist to reach No. 1 on a Billboard Global chart as a soloist and as part of a group, and the most viewed Youtube music video in 24 hours by a solo K-pop artist.

In “On The Ground,” Rosé reflects on her life as a K-pop superstar and sings about how the things that matter most in life are already within herself. The music video features fancy chandeliers and Rosé’s heartfelt acting.

Twenty-nine of Blackpink and its members' music videos have surpassed 100 million views and currently their Youtube channel has 62.9 million subscribers, making them the world’s most-subscribed female act on Youtube music as of July 13.