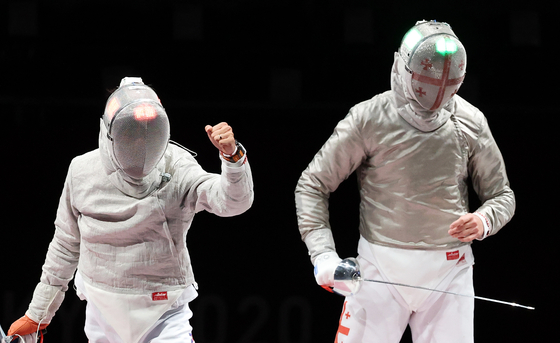 Kim Jung-hwan reacts after winning a point against Sandro Bazadze of Georgia in the men’s sabre bronze medal match at Makuhari Messe Hall in Chiba, Japan on Saturday. [NEWS1]

Kim fought five matches to win the bronze medal at what could be his last Olympics.

The Korean looked strong from his first match, against Konstantin Lokhanov of Russia.  The 37-year-old belied his age with some daring moves, at one point flinging himself toward the opponent's side, landing on the piste but with his fist high in the air, taking away a hard earned sixth point. 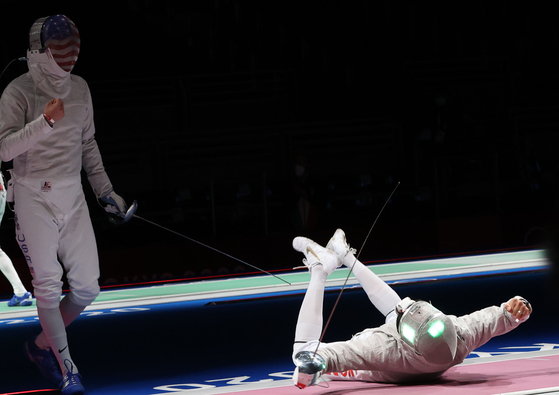 Kim Jung-hwan clenches his fists lying on the piste after winning a point against Eli Dershwitz of the United States in the men’s sabre quarterfinals on Saturday. [YONHAP]


His second game, against Eli Dershwitz in the round of 16, was not as easy as his previous round as Kim was just one point ahead at 9-8 in the end of the first set.


After a short one-minute break, Kim was back on track, having figured out his opponent, Kim took five points in a row, eventually finishing up 15-9.

Kim’s bigger challenge came in the quarterfinal against Kamil Ibragimov of Russia. Kim had finished the first period 8-5, three points behind the Russian, but was able to catch up to tie at 11-11 in the second period.

Trailing behind the Russian by one or two points until the very end, Kim made a big last minute comeback, taking a 14-14 tie to a 15-14 win on his side.

Kim went to the semifinals, where he faced world No. 4 Samele Luigi of Italy.

Kim started out the game 3-1, until the Italian caught up to take the score to 4-4. Kim went on the attack and kept on scoring to finish the first set 8-5.

The Italian opened the scoring in the second period, but Kim was able to pull off four consecutive points, bringing the game to 12-6.

Just as everyone thought that Kim was heading to the finals, Luigi made a big come back with six straight points to tie the game at 12-12.

Kim was unable to score any more points, while Luigi added three, taking away the ticket to advance to the final against Aron Szilagyi of Hungary. 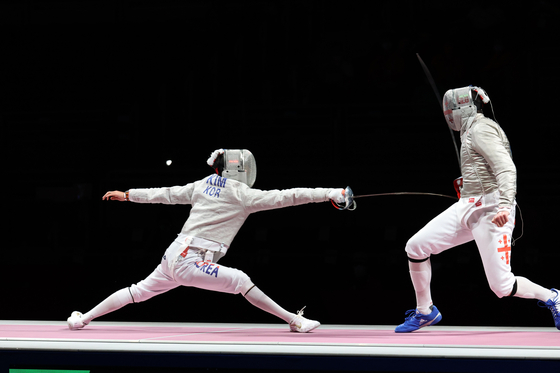 
Kim then headed to the bronze medal match against Sandro Bazadze of Georgia, opening the score at 2-0, but quickly ending up tied at 6-6.

With two competitive players vying for one bronze medal, every point was crucial. A the VAR request from the Georgian side overturned Kim’s eighth point, giving it to Bazadze.

Kim didn't back down, bringing back four consecutive points to level the game to a 10-10.

He started his comeback with an additional point to Bazadze’s shoulder. But with another point from the Georgian, the game was again level at 11-11.

Both players had played from early in the morning and had sweated through their gloves, impairing the electrical system that is used for points. After a brief time out to rearrange their gear, Kim came back on the piste looking determined.

Kim did not concede a single point, taking the score to 14-11 with just one point more needed for a bronze medal. His deep lunge led to the last 15th point, winning the bronze medal.

This is Kim's third Olympic medal, after his sabre team won gold at the 2012 London Olympics and an individual men’s sabre bronze medal at the Rio Olympics. 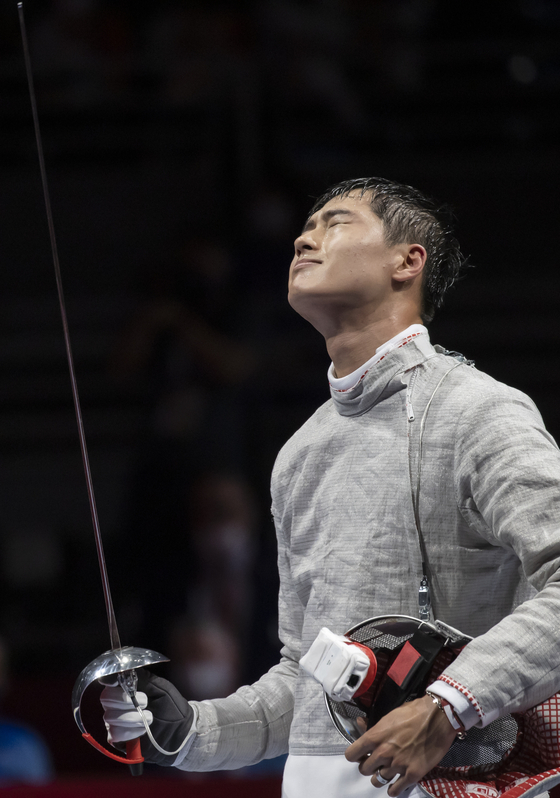 Oh Sang-uk looks disappointed after dropping out of the quarterfinals against Sandro Bazadze of Georgia at Makuhari Messe Hall Chiba, Japan on Saturday. [JOINT PRESS CORPS]


World No. 1 Oh Sang-uk, who was there on the piste next to Kim’s, dropped out at the quarterfinals against the Georgian himself.

Oh and Bazadze’s scores were close until the game went to a 10-10 tie with five points left till the last round, the two fencers clashed and fell down on the piste with the Georgian pulling out with a point 11-10.

Both fencers came back on the piste after a brief break. Oh came back with confidence, taking two consecutive points.

However, the Georgian was also looking sharp, taking the points to 13-12. With just a few points left to win the bout, Oh was back on the piste and after wiping off his forehead, brought the game back to a tie 13-13.

But the Georgian took the next point and the game ended up at 14-13 when Oh conceded another point to the Georgian and to everyone’s surprise, crashed out of the game.

None of the Korean women epeeists were able to win a medal in their individual bouts. Choi In-jeong and Kang Young-mi dropped out in the round of 32, while Song Se-ra alone advanced to the round of 16 but lost against world No. 1 Ana Maria Popescu.

Fencing will start with the men’s épée tomorrow. Ma Se-geon goes against Roman Petrov of Kyrgyzstan at 9:30 a.m. Jeon Hee-sook faces Rio Azuma of Japan at 10:55 a.m. Kweon Young-jun faces Bas Verwijlen of the Netherlands at 11:55 a.m. and Park Sang-young takes on Jacob Hoyle of the United States at 1:10 p.m.