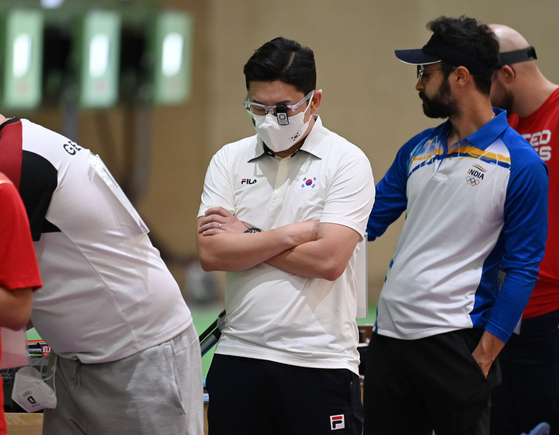 On Saturday, Jin finished 15th with 576 out of 600 points when only the top eight advanced to the finals. The result came as a huge shock — Jin is the 2008 Beijing Olympics silver medalist and 2012 London Olympics gold medalist in the event.

Jin shot 95 in his first series, 96 in his second and 98 in his third, but slipped out of the competition when he shot 93 in his fourth series. He shot a 97 in his fifth series and then went on a run of 10s that nearly saw him qualify, only to fall apart on the last few shots to score another 97.

On Tuesday, Jin was looking for redemption in the team event alongside Choo Ga-eun, but the duo shot a 575 in the first stage to finish ninth, missing a chance to advance to the second stage with the top eight teams advancing to the second stage.

Having won four gold and two silver medals, Jin is tied for first in Korea's all-time individual total medal and gold medal rankings and one more medal would have made him the winningest Korean Olympian and the winningest shooter in Olympic history.

Jin isn't the only shooter to fall apart in Tokyo.

On Saturday, Kim Mo-se did advance in the 10-meter air pistol while Jin failed, but dropped out immediately in the second elimination round. Next in line was the men's skeet qualification, where Lee Jong-jun shot 24, 25, 24, 24, 24, a total of 121 finishing 13th and failing to advance to the finals. 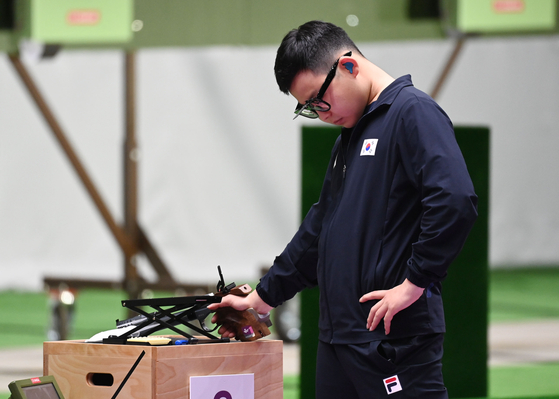 Kim Mo-se drops his head after firing a disappointing shot in the men's 10-meter air pistol event on Saturday at the Asaka Shooting Range in Tokyo. [JOINT PRESS CORPS]


One team did put up a fight. The 10-meter air rifle mixed team of Kwon Eun-ji and Nam Tae-yun made it all the way to the bronze medal match, outpacing teammates Park Hee-moon and Kim Sang-do, who fell in the first round.

Kwon and Nam shot their way through the competition to reach the bronze medal match against the Russian Olympic Committee, losing 17-9. 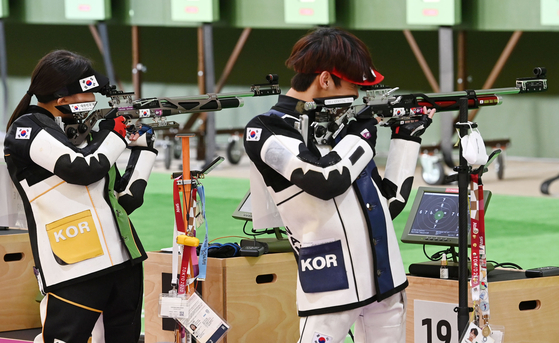 
Team Korea still have a few more shots at a shooting medal at the Tokyo Games.

The entire event ends with the men's 50-meter rifle three positions event at 11:30 a.m. on Aug. 2, where Kim Sang-do will represent Korea.