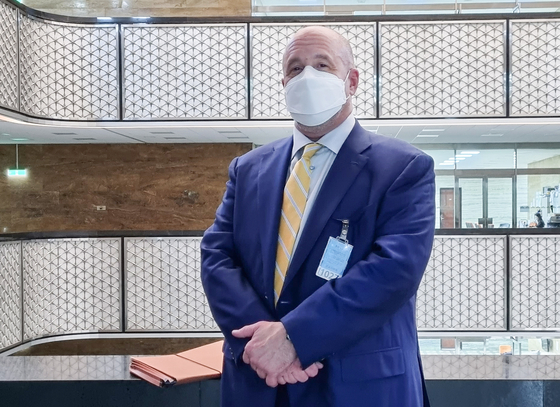 Mark Buse poses for a picture at the National Assembly in southern Seoul after the meeting on the proposed revision to the Telecommunications Business Act, nicknamed the Anti-Google law. [YOON SO-YEON]


Korea’s Anti-Google law is vital and inevitable and will lead to other countries soon following, said Mark Buse, senior vice president of Dallas-based Match Group and also a founding member of the Coalition for App Fairness (CAF).

Buse visited the National Assembly on Tuesday afternoon to talk with local representatives pushing for the proposed revision to the Telecommunications Business Act, nicknamed the Anti-Google law, and the local press. The meeting was organized by the parliament's Science, ICT, Broadcasting and Communications Committee and included experts such as Park Seong-ho, chairman of Korea Internet Corporations Association (K-Internet).

"What Korea is doing right now is very meaningful," Buse told the Korea JoongAng Daily in an interview held after the event. "There are similar movements at the congressional level, at the state level as well as in court. But the court cases will likely take about a year or two until we get results."

Buse added that all the legislative and regulatory movements against Google and Apple in-app purchase enforcement are "inevitable." 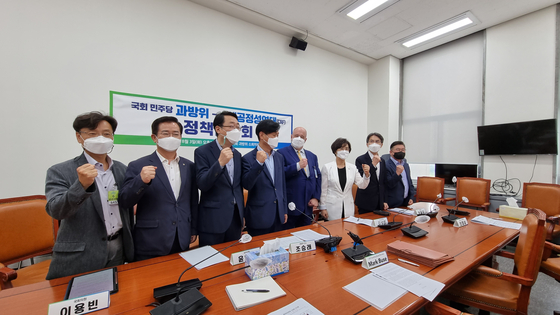 Members of the Science, ICT, Broadcasting and Communications Committee and Mark Buse (fourth from right), a founding member of the Coalition for App Fairness, pose for photos during a meeting on the proposed revision to the Telecommunications Business Act, nicknamed the Anti-Google law, held on Tuesday at the National Assembly in southern Seoul. [YOON SO-YEON]

It has been one of the most vocal organizations regarding the in-app purchase issue in the U.S. Member Epic Games brought Apple to court last year for enforcing an in-app purchasing system. The case is still in court.

“It takes courage to fight against two of the most profitable companies on the globe,” he said, “but this issue is not about two companies. This is about breaking up monopoly. I want to emphasize that developers around the world applaud the hard bold work of the National Assembly."

The bill awaits a decision from the Legislation and Judiciary Committee to see whether it goes to a National Assembly’s plenary session for a vote this month. The bill would prohibit Google from including all app developers its in-app billing system, which charges a 15-to-30 percent commission.

Rep. Jo Seoung-lae of the Democratic Party and a member of the science committee said that there is a high chance that the bill will be discussed at the plenary meeting on Aug. 17. Following are answers Buse gave to questions from the local press. 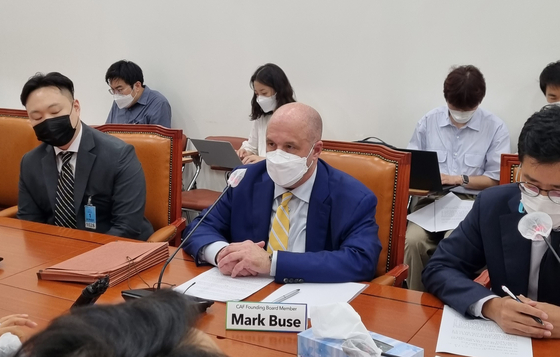 Mark Buse speaks at the meeting on the proposed revision to the Telecommunications Business Act, nicknamed the Anti-Google law, held on Tuesday at the National Assembly in southern Seoul. [YOON SO-YEON]


Q. Some people say that Google and Apple have the right to demand a certain fee as they have created an entirely new market, and also because it costs to operate app markets. What does CAF think about those arguments?

What legislative measures are being taken in the United States?

Legislation to regulate big tech apps is moving through congress as normal, but the U.S. Congress is slow. We lack some of the efficiency that you have here. But the issue is very much alive and moving forward.

Fifteen states in the U.S. have introduced legislation to address this on the state level. Some of the states have already gone out of session, but we expect double as many states to fight to move on this issue by next year. But we are looking towards Korea and its accomplishments here to lead the way for both the states and the federal government.

What is your opinion regarding the opposition’s concerns that the bill may go against the free trade agreements between Korea and the United States?

Korea acting in this area in no way at all violates any of the free trade principles that both Korea and the U.S. embrace.

This is not nationalist. Even if it is, every nation is doing it simultaneously in the exact same way. This is not one country versus another. This is not about creating trading issues. This is simply about breaking up monopoly. It’s that simple.

What significance would the bill have if it is passed by the National Assembly?

We have always known that Korean IT policy sits at the forefront of the global regulatory environment and we’re hugely appreciative and heartened by Korea’s proactive decision last month to establish equity and fairness within the app market ecosystem. The action taken to date by the Korean National Assembly firmly establishes it as the global leader in this area. I cannot emphasize enough not only how groundbreaking this effort is, but how important it is to app developers, not only in Korea but globally.

If Korea acts to do this, small developers across the world are going to want to headquarter here in Korea so that they are not forced to pay this unfair 30 percent. It would be an economic boom to the community of people right out of college who want to invent the next Google, the next whatever is going to come to revolutionize the space. That only happens when the free market is allowed to prosper.