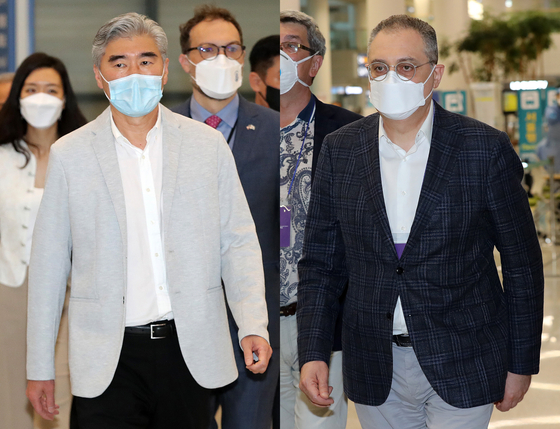 
The U.S. and Russian top nuclear envoys are visiting South Korea this week to discuss ways to get the North to return to the dialogue table in the midst of the ongoing Seoul-Washington summertime military drill.

South Korean Foreign Minister Chung Eui-yong met with Kim Sunday afternoon at the foreign minister’s residence to discuss ways to restart the peace process on the Korean Peninsula at an early date, said his ministry.

The Foreign Ministry said Noh and Kim, who doubles as U.S. ambassador to Indonesia, will discuss Monday ways for the two countries to cooperate “for the complete denuclearization and practical progress in the establishment of lasting peace of the Korean Peninsula.”

The two sides are expected to evaluate the security situation on the Korean Peninsula, including assessing their joint military exercise, and discuss ways to manage the situation in a stable manner.

The visit comes amid increasingly aggressive rhetoric from Pyongyang in protest of the annual joint military drill between Seoul and Washington, which runs from Aug. 16 to 26.

The U.S. State Department said that Kim's visit to Seoul to meet with Noh and other senior South Korean officials is to “discuss the situation on the Korean Peninsula and continue close coordination on the way forward.”

It added that the visit "illustrates the U.S. and ROK [Republic of Korea] commitment to ongoing close collaboration on DPRK issues as we seek to advance complete denuclearization and permanent peace on the Korean Peninsula,” referring to the acronym for the North's full name, the Democratic People's Republic of Korea.

Kim upon his arrival at Incheon International Airport Saturday told reporters he expects “a very productive visit” and that he looks forward to “very close consultations” with South Korean government officials.

The U.S. envoy added he will also meet with Morgulov during his Seoul visit.

However, a trilateral meeting between the three countries’ nuclear envoys has not been arranged yet, according to a Seoul Foreign Ministry official Friday.

This marks Kim’s second visit to Seoul since his appointment as the U.S. top nuclear envoy in May. He last visited the country from June 19 to 23.

During his last trip, Kim said the Joe Biden administration is ready to meet with North Korea “anytime, anywhere without preconditions,” thus there is interest in what message the U.S. nuclear negotiator will deliver to Pyongyang this time around.

There could also be discussions in Seoul on more concrete measures for humanitarian aid to North Korea, such as support for Covid-19 vaccines, food shortages and flood recovery efforts, which could be a opportunity to create a more conducive environment for dialogue.

Kim, who previously helped arrange the first North-U.S. summit in 2018, made no separate contact with North Korea during his June visit.

Morgulov, who doubles as Russia’s chief nuclear negotiator, arrived later Saturday morning for a six-day visit to South Korea for talks on the denuclearization issue with Noh scheduled for Tuesday.

Kim Yo-jong, the powerful younger sister of North Korean leader Kim Jong-un, lambasted the Seoul-Washington military drill, warning that "a dear price should be paid” in a statement on Aug. 10, calling for the United States to withdraw its troops and military assets from South Korea.

Kim Yong-chol, director of the North's United Front Department, in charge of inter-Korean affairs, in another statement on Aug. 11 threatened that a "serious security crisis" will follow. Seoul and Washington have stressed that the computer-simulated combined command post training are “defensive” in nature.