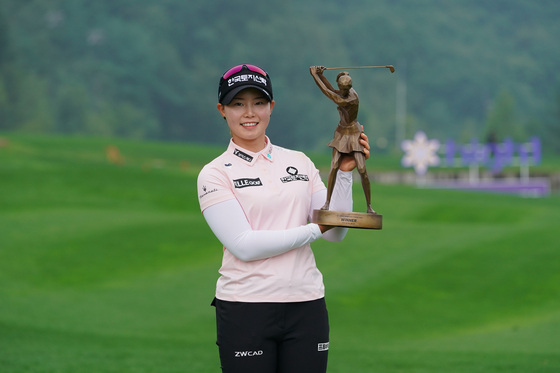 Lim started out the first day of the tournament with five birdies and two bogies to tie for third alongside group member Park who birdied twice to tie for ninth. The next day, Park moved up five ranks with a great second round that saw six birdies and three bogies while Lim birdied four times but had three bogies to finish tied at sixth.

On moving day, heavy rain caused the tournament to stop at 10:48 a.m. The remaining round was postponed to early morning on the last day. Golfers started 6:50 a.m. on Sunday to continue with the remainder of the third round. They partook in a shotgun start which is a format in which all groups of players tee off simultaneously from different holes. After the third round was completed, Lee took a solo lead with Kim and Oh tied at second and Lim tied at fourth alongside Park. 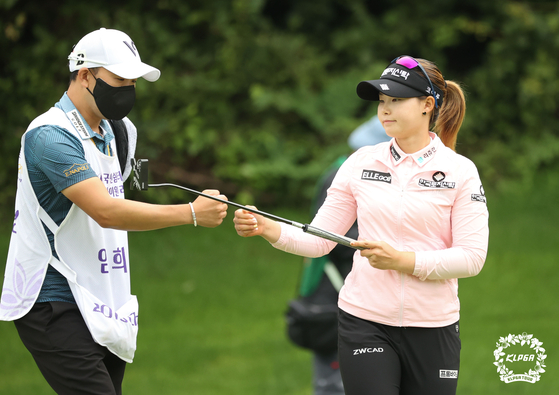 Lim Hee-jeong celebrates birdying par-5, fourth with her caddie at the final round of the HighOne Resort Ladies Open 2021 held at HighOne Country Club on Sunday. [KLPGA]


The fourth round got underway at noon on Sunday and Lim started out with a par on the first par-4 hole. Despite bogeying the next par-4, second, she was able to birdie three times in par-4, fourth, par-3, sixth and par-3, eighth. After 11 holes, four golfers Park, Oh, Lee and Lim were tied at first with 10-under-par.

But after two more, Lim was the one to take a solo lead birdying par-4, 13th. That birdie sealed the deal for Lim who held onto the lead until the end. With both Lim and Park parring the last hole, Lim waited for the last group to finish to concrete her win. The last group, Kim, Oh and Lee all parred the hole. Lee had been looking for her first-ever win, Oh for her second season win and Park for her seventh season win. But in the end, it was defending champion Lim who took home the silverware.

"I had a hard time because it took such a long time to win my fourth tournament after my three wins in 2019 when I was a rookie," said Lim during a post-tournament interview.

"It feels great to win my fourth tournament where I won my third."

"I want to play golf for a long time," answered Lim when asked why she changed her golf swing during the season.

"Even though it's risky, I did it to play better golf for a longer time."

The KLPGA Tour will continue with the Hanwha Classic 2021 on Thursday at Jade Palace in Chuncheon, Gangwon.