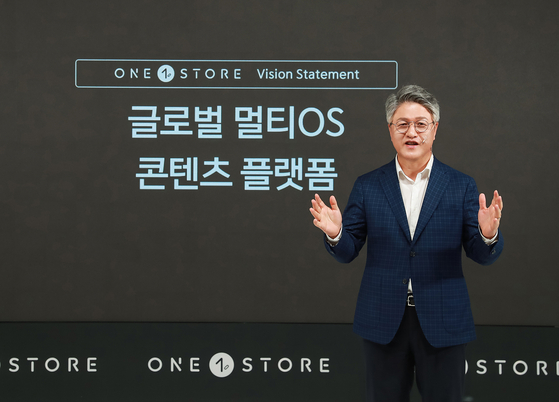 Lee Jae-hwan, the CEO of One Store, presents the app market's goal of becoming a ″Global multi-OS content platform″ during an online conference held on Monday morning. [ONE STORE]

It said on Monday that it will first be available in Asian countries in 2022, then expand into other overseas app store markets potentially through partnerships with its existing partners including Blizzard, Microsoft and Tencent. Later, it will serve other devices, such as computers and consoles. Its vision is to become a “Global multi-OS content platform,” according to One Store’s CEO Lee Jae-hwan.

“We are currently dubbed as the only local app market in Korea, but we plan to go beyond all of that — beyond Korea, beyond mobile and beyond an app store,” Lee said. “We have been growing as an app market by building a healthy ecosystem with local app developers and game companies. We plan to take that and compete in the international market, aiming for a threefold growth by 2025.”

One Store is largely unknown globally despite its comparable market share to Apple's App Store in terms of payment volume in Korea.

According to research firm IGAWorks, One Store took 18.4 percent market share by payment volume in August 2020 in Korea, while Google Play and Apple’s App Store accounted for 71 percent and 10.6 percent, respectively.

It was started in 2016, when SK Telecom, KT and LG U+ decided to combine their respective app markets into a single app market. Before that point, each mobile carrier operated a different app market for their network subscribers and installed it as the default on their phones. Naver, which was operating its own app market, later joined as well.

A pending bill aimed at preventing dominant app stores like Google from enforcing a certain billing system or conditions for developers could benefit One Store, according to Lee.

“This will give One Store a competitive edge, as we have been offering app developers that very freedom to choose what purchase system they want to use since the beginning,” Lee said. “We have been splitting the income with app services 8 to 2, with 20 percent commission we take on maintenance fees, contrary to other platforms that charge 30 percent commission.”

Another potential opportunity could open for One Store on the global level. Apple is currently in court after it was sued by Epic Games, the developer of video game Fortnite, for forcing apps to use only Apple's iOS App Store for iPhone and iPad users to download apps on their devices.

“The lawsuit aims to ban Apple from only allowing its iOS App Store to be installed on Apple's smart devices,” said Jin Heon-kyu, director of the business strategy division. “If Apple loses and the door opens for other app stores, One Store will be the first to be ready and launch on Apple’s devices. We will also be the first to prepare ourselves for any new market that opens in the future.”

One Store is currently a subsidiary of SK Telecom, which had the largest number of users when the app markets were merged. In September last year, it started procedures to go public on the local stock market. The company did not reveal any plans for the initial public offering on Monday’s conference.

“We believe that we can reach an annual revenue of 200 billion won this year,” Lee said. “We’ll also be producing our own content and distributing it through our platform to go further than a simple app market model, such as stories that could be expanded into films, dramas, animations and games.