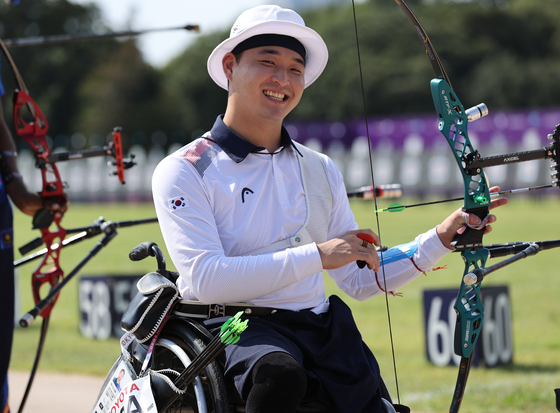 Kim Min-su shoots his recurve bow during the men's recurve ranking round at the Tokyo Paralympics at Yumenoshima Ranking Field on Friday. [YONHAP]


With the archery ranking rounds at the Yumenoshima Ranking Field in Tokyo now finished, Korea's archers are warmed up and ready to show off their skills on the big stage.

Koo Dong-sub started out the men’s individual W1 ranking round in eighth, shooting a total of 625 points.

Only W1 archers can compete in the W1 events. W1 archers compete in a wheelchair because their impairment involves leg and trunk function and arm strength. Archers may choose between recurve and compound bows and an 80 centimeter target is used at a distance of 50 meters, with bands also scoring from 10 points down to one from the centre to the outside.

Koo is a 40-year-old veteran and a silver medalist at the 2016 Rio Games, where he won the medal with Kim Ok-geum.

Kim Ok-geum is a 61-year-old veteran and finished fourth in the women’s individual W1 ranking round with 598 points.

In recurve and compound events, open sport class athletes compete. They have an impairment in the legs or have a balance impairment and can shoot standing or resting on a stool.

For the women’s recurve ranking round, Jo Jang-moon finished 20th with 505 points and and Kim Ran-sook finished 24th with 461 points. For the men’s recurve, Kim Min-su finished 6th with 628 points. Kim Min-su holds the world record for the event since June 3, 2019 when he shot 662 points.

Choi Na-mi is the only archer that shoots a compound bow in Team Korea. She finished 20th with 652 total points.