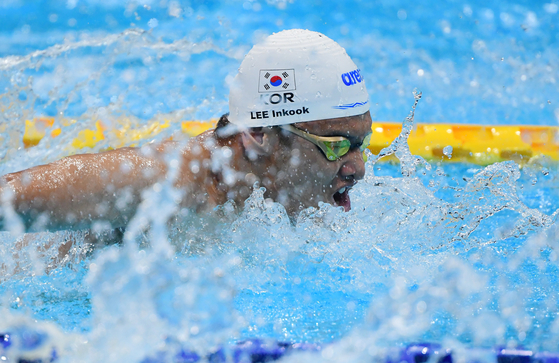 
Lee In-kook and Lee Ju-young finished 12th and 13th in each of their S14 men's 200-meter freestyle heats at the Tokyo Aquatics Centre on Friday.

Lee In-kook swam in the first heat and completed the 200 meters in 2:03.16, 6.35 seconds before Jordon Catchpole from Great Britain, who topped the preliminary board. Lee Ju-young swam in the third heat, finishing in 2:03:68, 6.38 seconds before the leader. With only the top eight swimmers progressing to the finals, both missed out on a chance to medal.

Swimmers in the S14 sport class have an intellectual impairment, which typically leads to the athletes having difficulties that impact their sport performance in general.

For Lee In-kook, who won gold at the 2016 Rio Games, becoming a three-time Paralympian at the Tokyo Games is in itself a great achievement. Lee Ju-young who debuted at the Tokyo Games, making his 13th finish  a promising sign for the future.