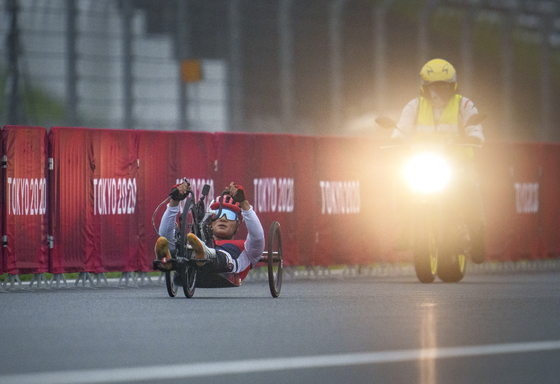 Yoon Yeo-keun competes in the men's H4 road cycling race during the Tokyo 2020 Paralympic Games at the Fuji International Speedway in Oyama, Japan on Wednesday. [AP/YONHAP]


Korea finished last in the 24.3-kilometer (15-mile) mixed cycling road class H1 to H5 team relay on a rainy day at the Tokyo Games on Thursday.

In the mixed cycling road relay, the team is made up of athletes with different levels of impairment. For Korea, class 4 Yoon Yeo-keun, class 4 Lee Do-yeon and class 3 Lee Gyeong-hwa teamed up to compete. Korea was the only team with two female cyclists — the two Lees.

Yoon started out the race, passing the race on to Lee Do-yeon in last place. Lee Do-yeon outpaced Austria in the second lap and Lee Gyeong-hwa held on to the ninth position until the 8.1 kilometer point, but Team Korea was pulled down to tenth from Yoon's second lap.

Though the three Korean athletes leave Tokyo without a medal, being the only Asian country to reach the finals is itself an achievement.