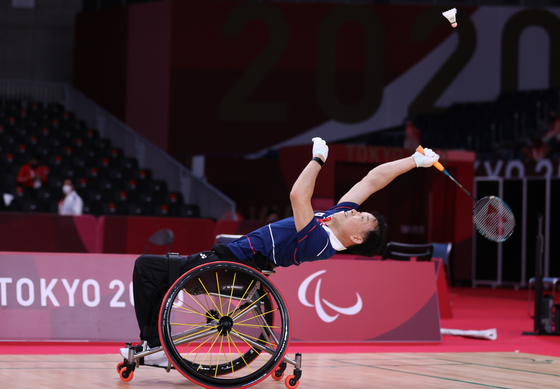 Lee Dong-seop stretches for the shuttlecock during a game at the 2020 Tokyo Paralympics on Saturday. [YONHAP]


Korea picked up two medals in badminton at the 2020 Tokyo Paralympics on Saturday, winning both silver and bronze in the men's singles class WH1.

Korea was guaranteed at least one medal before play began on Saturday, as teammates Lee Sam-seop and Lee Dong-seop were due to face off in the semifinal. Lee Sam-seop won the game 2-1, earning a spot in the final.

Lee Sam-seop took on China's Qu Zimo in the gold medal match, but retired in the second set, leaving Qu with a 1-0 victory and a gold medal. Lee Sam-seop took silver, winning Korea's first medal in badminton as the sport makes its Paralympic debut this year.

The Korean badminton team is guaranteed at least two more medals on Sunday, as Kim Jung-jun will compete in the men's WH2 gold medal match and then return to the court in the afternoon with Lee Dong-seop for the men's doubles WH gold medal match.

Kim Kyung-hoon will also compete in the WH2 bronze medal match, potentially earning a fifth medal for the badminton team.