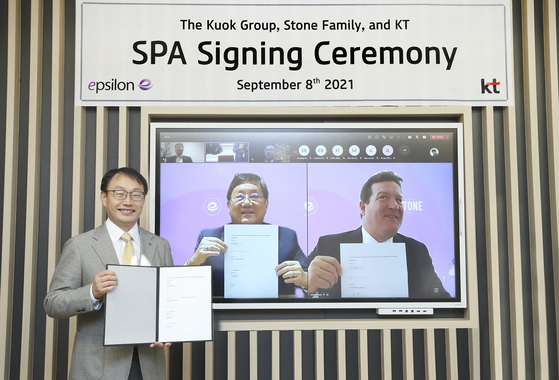 KT and Daishin Private Equity have signed an agreement to buy a 100 percent stake in Epsilon Global Communications at $145 million, the telecom company said Thursday. From left are KT's CEO Koo Hyun-mo, Kuok Group Chairman Kuok Khoon Ean and Andrew Stone, a member of the board of directors at Epsilon. [KT]


KT has signed an agreement to acquire global data company Epsilon Global Communications at $145 million, through which KT will expand its presence in the United States and Europe, the company said Thursday.

This is the first global acquisition to take place since CEO Koo Hyun-mo took office in March 2020. In October last year, CEO Koo announced that he would carry out active mergers and acquisitions to expand KT's business portfolios.

Daishin Private Equity, a subsidiary of Daishin Securities, took part in the acquisition as a financial investor. KT will manage Epsilon, but the two companies did not disclose what stake they are each taking in the company.

"We have decided on the acquisition to strengthen our competitiveness in the global data business market that has been growing explosively and to respond quickly to our global clients," KT said in a statement.

The global data business refers to connecting data networks in different countries through data centers set up in different regions. It is a growing business that had an estimated market volume of 72 trillion won ($61.6 billion) last year, growing by 7 to 8 percent year each on average, according to KT. The market is expected to grow to 100 trillion won by 2025.

Epsilon specializes in global data connections through cloud technology and providing IT platforms and solutions to telecom companies around the world. In IT, a solution is a general term that refers to computer programs, software, related technologies and the services needed to use programs.

“Until now, there were inconveniences in connecting network services between the Korean headquarters and overseas branches,” said CEO Koo in a press release. “KT has now acquired the capacity to provide a one-stop global data service through the acquisition of Epsilon. We will endeavor to heighten our company value as the best digital company in Asia that performs well in the global data market.”

To expand Epsilon’s business even further, KT will carry out “bolt-on” acquisitions, also referred to as tuck-in acquisitions, where the acquiring company acquires additional companies with similar businesses.