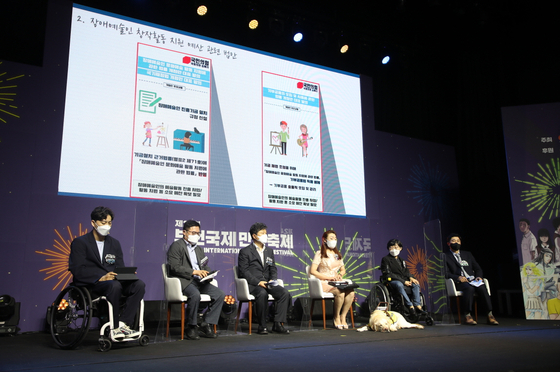 During “Seminar on Webtoons by Disabled Comic Artists” at the 24th Bucheon International Comics Festival, experts and aspiring artists got together and talked about the importance of fostering more artists with disabilities in the webtoon industry. [KOMACON]


Webtoons are not only a common source of entertainment but can also act as a valuable learning material.

During the Bucheon International Comics Festival (Bicof), which ran from Sept. 4 until the 12, an online conference took place on Sept. 9 where experts and aspiring artists got together and talked about the importance of fostering more artists with disabilities in the webtoon industry.

The conference was called the “Seminar on Webtoons by Disabled Comic Artists” under the theme “New Media Era — Webtoon is a Hope to Disabled People.”

It was hosted by YouTuber Weracle, whose real name is Park We, and moderated by Professor Kim Byoung-soo of the Department of Webtoon Animation at Mokwon Universtiy in Daejeon.

Park is a YouTuber who is paralyzed that uploads videos on his channel Weracle to familiarize the public with disabilities and rehabilitation. His channel name is a compound of his name “We” and the word “miracle,” to symbolize Park's hope that everyone has a miracle in their lives. His channel has 294 thousand subscribers.

The seminar, mostly a panel discussion, was divided into two parts. In the first section, aspiring artists with disabilities who are studying at the Webtoon Academy for Disabled Youth talked about how they are working toward becoming webtoon artists.

Disabilities are not often a recurring theme in Korea’s webtoon industry. A few have received attention for presenting a main character with a disability, like “Ho!” by author Uksoo, “Indiscriminating! Team Leader Kang” (translated) by author Hong Gyeong-won and “I Am Deaf” by author Lee Su-yeon. 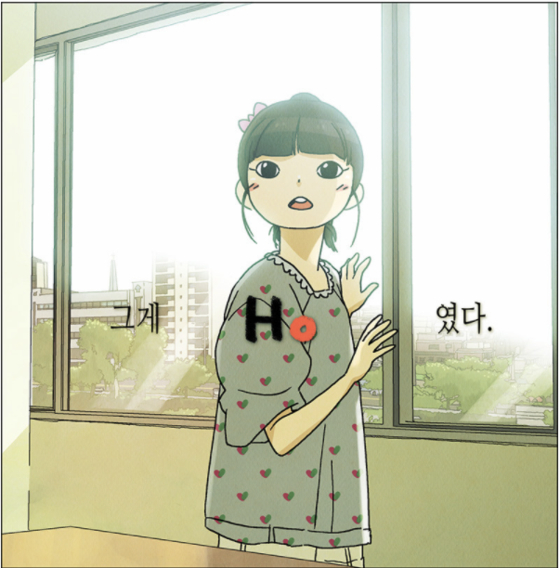 Naver Webtoon's ″Ho!″ is about a romance between Yoon Ho, who is deaf, and her teacher-turned-boyfriend Kim Woni. [SCREEN CAPTURE] 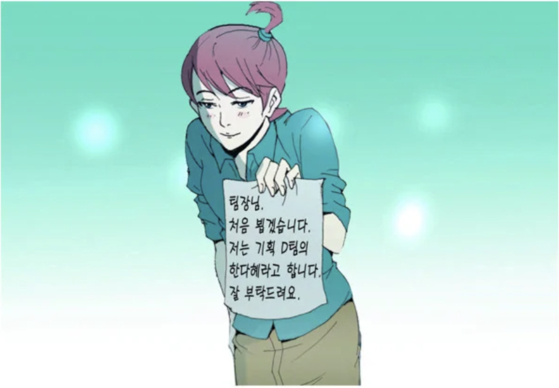 Daum Webtoon's ″Indiscriminating! Team Leader Kang″ (translated) is about how the greedy, ill-tempered team leader Kang Yoo comes to understand Han Da-hye, an employee who is deaf. This scene shows Da-hye greeting Yoo for the first time with a written note. [SCREEN CAPTURE]


“Ho!,” serialized on Naver Webtoon from 2014 to 2015, is a romance webtoon centered on the female protagonist Yoon Ho, who lost her hearing in an accident at age three and Kim Woni, her teacher-turned-boyfriend.

“Indiscriminating! Team Leader Kang,” published on Kakao Webtoon (previously Daum Webtoon) in 2009, portrays the hostile work environment in an advertisement company, and how the greedy, ill-tempered team leader Kang Yoo cooperates with Han Da-hye, an employee who is deaf.

However, “I Am Deaf” stood out the most with its premise of telling “the story of how a hearing-impaired person lives in Korean society.”

“I Am Deaf” (2015-17) is an autobiographic webtoon based on Lee, who was born deaf. Over 200 episodes, Lee described the everyday life of a deaf person in a funny and lighthearted way through the adorable main character Lyla, the persona of Lee. In an interview with Topclass magazine in 2015, Lee revealed that she decided to serialize this webtoon series in the hope that it will help people understand that “people with hearing impairments are also part of this world.”

The series received 9-point range ratings out of a possible 10, with each episode garnering tens of thousands of likes. In April 2020, Lee received the grand award from the Seoul Metropolitan Government for her contribution in raising awareness about the daily lives of people with disabilities with “I Am Deaf.” 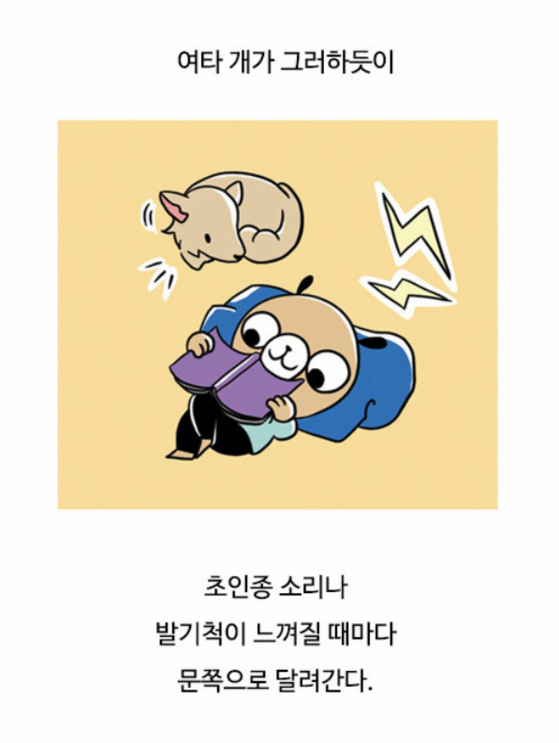 Naver Webtoon's ″I Am Deaf″ is the autobiographic story of author Lee Su-yeon, who was born deaf. In this scene Lee talks about how her pet dog is in charge of notifying her when someone is at the door. [SCREEN CAPTURE]


Cartoonist Lee Jung-hun, who teaches at the Webtoon Academy for Disabled Youth, explained during the seminar the importance of having artists with disabilities in the webtoon industry.

“Webtoons are a complex form of art that require writing, illustrating and proficiency in related [computer] programs, so it’s difficult to do everything at once,” said Lee. “But it is also mainstream, and webtoon artists frequently interact with fans. Webtoons allow artists with disabilities to stay connected to the world.”

Lee added that with sufficient training and practice, people living with disabilities are fully capable of becoming professional cartoonists. He told the story of a student with a brain-injury at the academy, who at first couldn’t even draw a single straight line, but after six months the student was able to draw their entire family.

Seo Young-seok, a lawmaker of the ruling Democratic Party, stressed that it was important to have the Ministry of Culture, Sports and Tourism support the academy, as the webtoon industry is a ray of hope for people with disabilities who want to get a job.

“A webtoon artist is able to work anywhere as long as they have the necessary equipment [which may be advantageous to artists with disabilites],” said Seo. “The academy needs to not only provide education to people with disabilities but also grow into a job center to help them gain independence as artists.”

When asked about the future of the academy, Bang Gui-hee, president of the Korea Disabled Artist Association, instead highlighted the need for a platform.

“Even if these aspiring artists create fantastic works of art, there is no place for them to upload them,” said Bang. “We do have Naver and Daum [now Kakao], but they are too competitive. It would be nice for Komacon [the Korea Manhwa Contents Agency, who hosts Bicof and runs the academy] to establish a separate online platform for artists with disabilities, even a small one to let the public see what wonderful works of art are in store for them.” 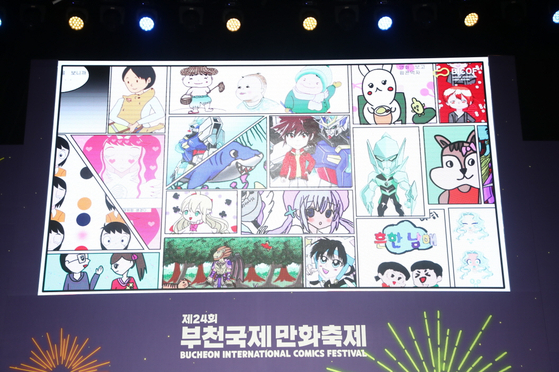 The seminar showed many artworks by aspiring artists with disabilities that study webtoons at the Webtoon Academy for Disabled Youth. [KOMACON]


Dividing the role of a webtoon artist into different positions such as author, illustrator, storyboard artist, line artist and matte artist has made it easier for people with disabilities to work as artists in the industry.

“Currently our company has about 10 webtoon assistants who each have their own specialized fields — four have hearing impairments, three have physical disabilities and two have brain damage,” said Kim Min-cheol, director of business planning at creator agency Creek & River Entertainment. “But it is true that their working speed is slower than artists without disabilities, so they usually work on webtoons that are premade before serialization, not the usual weekly-updated ones.”

Still, Kim was optimistic about the future of artists with disabilities in the webtoon industry, as segmentation reduces the burden of having one person take responsibility on every aforementioned task.