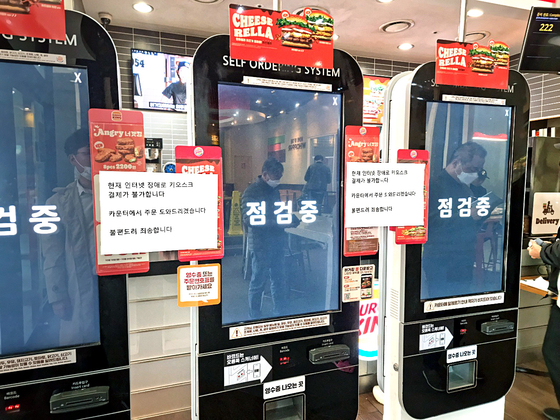 Kiosks have notices saying they are out of operation due to a network disruption on Monday at a restaurant in Incheon, Gyeonggi. [SIM SEOK-YONG]


KT's networks stopped working Monday morning due to a technical error by the country’s second largest carrier, disrupting communications of millions of individuals, stores and companies across the nation for an hour or longer.

The temporary outage led into the postponement of numerous sports and social events - including World Masters Baduk, an annual Go tournament – while retail investors were annoyed with their home trading systems going down.

Many subscribers to KT's mobile and broadband internet services couldn’t get access to the internet starting from 11 a.m. with some users seeing data connections restored around 11:50 a.m., according to a spokesperson for the telecom. Services were not completely restored as of the press time.

According to Jeong, payments could be made with credit cards -- even though it took three to five minutes for each payment -- but people couldn't get discounts or earn loyalty points.

"I either asked customers to transfer money to the shop owner's bank account or pay with cash. Thankfully, they were all very understanding," Jeong said.

A number of digital kiosks had to have their functions taken over by humans due to the glitch.

The disruption posed a serious challenge to people who are dependent on mobile platforms for how they earn a living.

“I had a hard time finding the location after calling the passenger,” Lee said. “I finally got to the site, but the navigation app didn’t work, so I had to ask the passenger to turn on her navigation [to show me the way to go],” she said.

Issuing receipts turned into a hassle. A worker at a post office in Sangam-dong, western Seoul, said that while their machines accepted credit cards, they couldn't print out receipts. If the card payment took too long, some customers paid in cash or transferred money via their bank accounts.

"Thankfully, a lot of people now prefer to have their receipts sent to them via mobile, so not being able to print receipts didn't cause us that big of a problem," said Ms. Kim, the 40-year-old postal worker.

No large-scale financial losses were reported. Big retailers like department stores and coffee chains like Starbucks have multi-access networks using more than one carrier.

KT initially suggested a distributed denial-of-service (DDoS) attack was the cause, but a few hours later blamed a glitch in network routing.

"We suspected the DDoS attack because of the heavy traffic detected, but it turns out that a routing error caused the problem after we closely looked into the case," KT said in a statement.

The Science Ministry attributed the outage to a technical glitch by KT from the start, according to local media outlets.

A spokesperson at the ministry told the Korea JoongAng Daily that an investigation is ongoing and the result will be announced later today.

The Korea Internet & Security Agency (KISA), a state-run research institute specializing in cyber security, said that a DDoS attack had not been reported.

“We haven’t seen any application for reporting a DDoS attack,” a source at the KISA said.