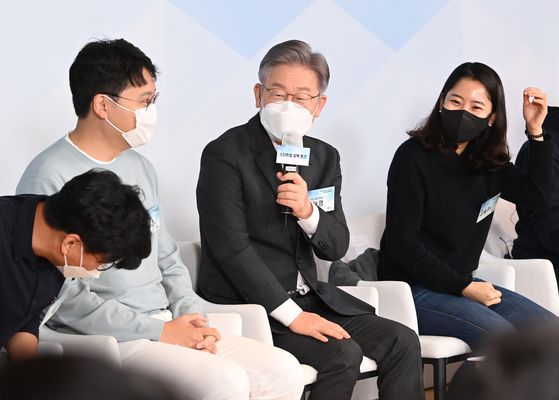 Korea is considered to have “positive” regulation, which means that the law specifically lists things that companies can do, while prohibiting the rest. This is considered a fundamental hurdle for start-ups, especially those that try to expand the frontiers of business and do things that are new.

“The government’s excessive regulations are clearly acting as a barrier and damaging the entrepreneurial environment for people looking to start their own businesses,” Lee said on Monday during a meeting with CEOs of start-ups held in eastern Seoul.

“We must make it possible for people to start their businesses freely," Lee said. "The government needs to take responsibility for nurturing future talent and changing the policies so that people can build on their mistakes.”

During the event, organized by the Korea Startup Forum, Lee sat down with the CEOs of major local start-up successes including Zigbang, Kurly, Dunamu, Watcha, Viva Republica and 8percent, and heard their concerns about the start-up environment.

Many of the CEO complaints were about government regulations, which according to them are “too strict and often inconsistent.”

“There are times when the exact same business is dealt with differently by different government officials, such as the Ministry of Food and Drug Safety and regional governments,” said Kim Seul-ah of online shopping mall Kurly.

“Speed is essential for start-up companies, but having to go through paperwork and bureaucracy takes us so much time.”

Candidate Lee promised that he will try to change “positive” regulations to “negative” regulations. In that case, the law states what should not be done, and businesses have more freedom.

“Financial and technical support are both very important, but the most crucial of all is regulations,” Lee said.

“Regulations need to be changed so that when companies do business, they know what to expect and how to deal with it.” 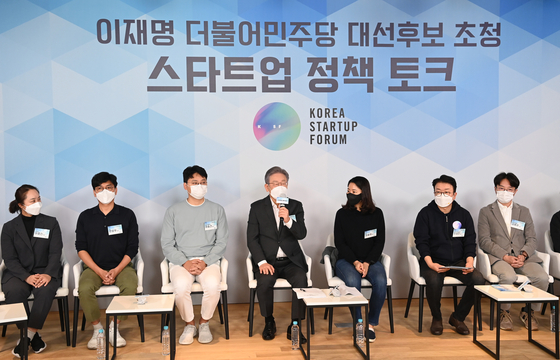 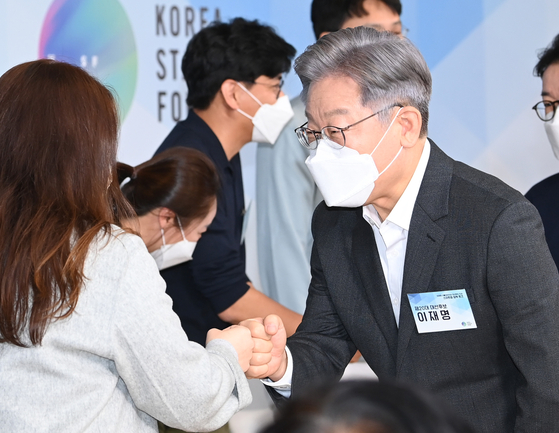 Democratic Party meets with CEOs of local start-ups on Monday during an event organized by the Korea Startup Forum in eastern Seoul. [JOINT PRESS CORPS]


Eased rules will translate into faster growth for start-ups, the CEOs said, urging the government to keep restrictions to the minimum.

“When we first kicked off our [fintech] service Toss, almost everything that we tried was either illegal or borderline-illegal,” said Lee Seung-gun, CEO of Viva Republica, which operates fintech app Toss.

While promising eased regulations and more support for Korean start-ups, Lee emphasized that start-up companies should be praised for their successes, but that they must not monopolize their businesses.

“It’s only right that [start-ups] enjoy the success of innovation, but they must refrain from making money through a monopoly,” Lee said on Monday.

“This is not to prioritize the public sphere, but a hope that the success of innovation spreads far and wide, allowing state-run services to compete in the market.”

Lee stressed that the role of the government is not to dictate the rules of market competition, but only to make sure that it is running fairly.

“I believe that the future of our economy depends on you,” Lee said, addressing the CEOs. “There are so few good job opportunities. I promise to listen and reflect your views in policies.”